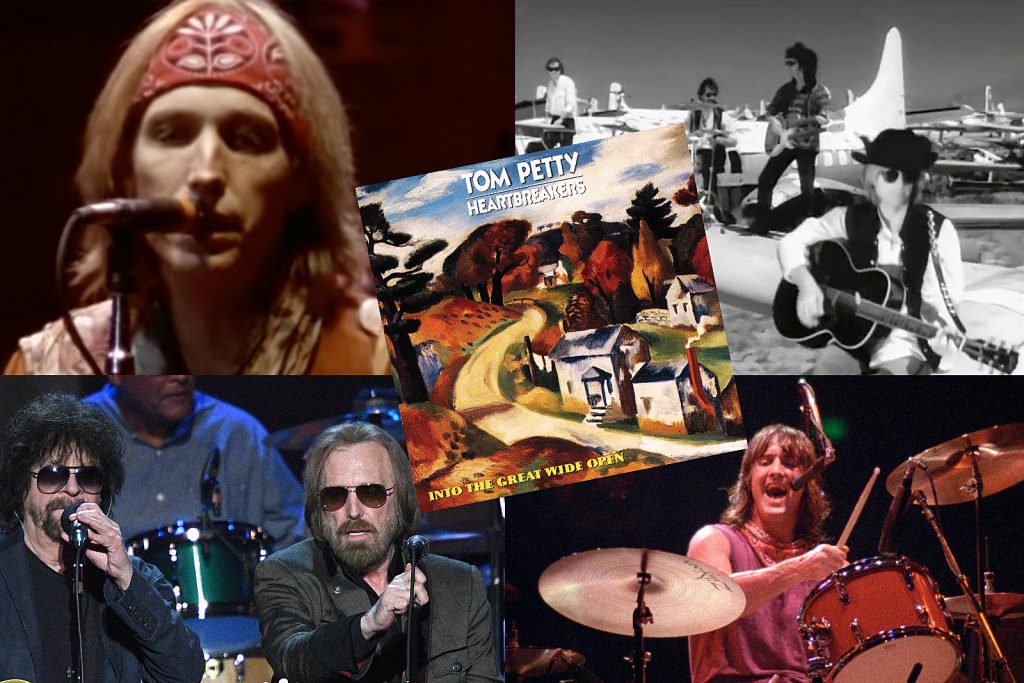 Tom Petty and the Heartbreakers were such a tight and tightly knit band at the time of his death in 2017 it’s hard to remember when that wasn’t necessarily the case.

Thirty years ago was a case in point, in fact.

The group’s 1991 album, Into the Great Wide Open, was its first in four years (back when that was a long time) and followed the massive success of 1989’s Full Moon Fever – Petty’s first release without the band moniker, though most of the Heartbreakers played on it and guitarist Mike Campbell coproduced.

There was a sense of uncertainty about what that all meant and perhaps some fear that Petty would leave the Heartbreakers behind, although a band tour to support Full Moon Fever should have put those concerns to rest.

Nevertheless, Into the Great Wide Open was hailed as a comeback of sorts, with a double-platinum certification, solid reviews and four Top 5 entries on Billboard’s Top Rock Songs chart for “Learning to Fly” and “Out in the Cold” (both No. 1), “Kings Highway” and the title track.

We outline 10 Facts About Tom Petty and the Heartbreakers’ ‘Into the Great White Open’ Album below.

Into the Great Wide Open was another collaboration between Petty and Electric Light Orchestra‘s Jeff Lynne. In addition to Full Moon Fever, the two had cofounded the Traveling Wilburys – with Bob Dylan, George Harrison and Roy Orbison – in 1988 and released the debut Vol. 1 that same year. The group’s second and final album, Vol. 3, came out in October 1990, after Orbison’s death and while Lynne, Petty and the Heartbreakers were recording Into the Great Wide Open. Lynne would go on to coproduce Petty’s 2006 solo album Highway Companion. “He was a great guy,” Lynne said about Petty after his death. “He was, like, one of the coolest people I’ve ever known. We’d just bang out songs, one a day, and they’re all, like, bound to be Top 5 or Top 10. We just somehow really clicked as a songwriting team, and we carried on doing it, and we did three albums together. And it was a good thing ’cause I got to cowrite a lot of the tunes on the albums.”

The album was recorded at Rumbo Recorders in Canoga Park, Calif., and at Campbell’s home studio. Lynne cowrote eight of the 12 tracks, with Campbell joining in on two. Lynne brought in ELO keyboardist Richard Tandy to play synthesizer on the track “Two Gunslingers,” and the Byrds‘ Roger McGuinn, a longtime Petty and Heartbreakers pal, sang backing vocals on “All the Wrong Reasons.” “Tom always showed me, and the Byrds, a great deal of respect, and I knew it came from a genuine place,” McGuinn said while promoting his 1991 album Back From Rio, which featured Petty and the Heartbreakers on several tracks, most notably the duet “King of the Hill.” “I felt the same way – there was a lot of mutual respect, and we also gel really well together. It’s a great band and good people.”

In an interview at the time of the album’s release, Petty acknowledged a calmer and more philosophical tone in his songs than much of what had come before. “It’s sort of hope among the ruins, I think,” he said. “To me, we’re all in the great wide open. I think life is pretty wild. I really want to like the world, but at the same time I have to write about what I see. This time I wanted to write about subjects … like ‘You and I Will Meet Again,’ you don’t really hear songs about friendship too often. Most rock records I hear now are about how tough [the artists] are. Well, if you’re really tough, you’re going to have to deal with that someday. They’re fairly old-fashioned values but important ones, things that still matter in people’s lives.”

“Learning to Fly,” Petty’s seventh No. 1 on the Billboard Top Rock Songs chart, was inspired by a TV interview with a pilot Petty had seen. His lyrics echoed the aviator’s comment about learning to fly that “the hardest part is coming down.” Some observers also felt the song was perhaps a commentary about stretching out solo on Full Moon Fever, but Petty never addressed that speculation.

Mike Campbell, for one, downplayed any worries about tension in the band stemming from Full Moon Fever. “When you stay together so long, you’re bound to run up against situations like that,” he once told UCR. “It’s part of being in a band. Sometimes you fight. Sometimes you don’t hang out with each other. Sometimes you do other things. That doesn’t mean you’re breaking up.” Besides going solo once more on Highway Companion, Petty, Campbell and keyboardist Benmont Tench also re-formed their pre-Heartbreakers band Mudcrutch for a pair of albums in 2016 and 2018.

The music video for the “Into the Great Wide Open” single – the cautionary tale of a rocker named Eddie who found too much ain’t enough – was dramatized by Johnny Depp, with appearances by Faye Dunaway, Friends‘ Matt LeBlanc, Terence Trent D’Arby, Chynna Phillips and Gabrielle Anwar. The clip was filmed during a hiatus from the movie Arizona Dream, which Depp and Dunaway were filming. Petty plays several roles in the video; other members of the Heartbreakers and Petty’s manager Tony Dimitriades also make appearances. In the 2005 book Conversations With Tom Petty, he said that making videos “was a lot of fun. I always liked films, and I liked being on the set. I liked learning and seeing what the directors did. We got really involved in it. I wanted to be there through the edit and through the whole thing.”

7) About That Album Cover Painting …

Into the Great Wide Open‘s cover features “Autumn Landscape,” which was painted in 1921 by Jan Matulka, a Czech-American artist who died in 1972 at the age of 81. Born in Austria-Hungary, Matulka specialized in abstract expressionism and landscapes, and his winsome, colorful style can be seen in his illustrations for Parker Fillmore’s early 20th-century books Czechoslovak Fairy Tales and The Shoemaker’s Apron. During the ’30s, Matulka was part of the Public Works of Art Project and the Federal Art Project that were among post-Depression U.S. government-stimulus initiatives. The original “Autumn Landscape” is currently owned by the Los Angeles County Museum of Art.

As he did on Full Moon Fever, Petty included a humorous comment at the end of the first side of cassette versions of the album, opening with “Attention cassette listeners … ” and instructing them how to properly turn the tape over to play Side Two.

“Learning to Fly” became a frequent fixture in Petty’s set – played 486 times, according to Setlist.fm, his 10th most-played song. “Into the Great Wide Open” ranks 29th with 130 plays, with “Kings Highway” sitting at No. 32 and 107 plays. “Makin’ Some Noise,” “Too Good to Be True,” “Out in the Cold,” “Built to Last,” “Two Gunslingers” and “All or Nothin'” also worked their way into set lists over the years.

Into the Great Wide Open was drummer Stan Lynch’s final full studio album as a Heartbreaker. Lynch left the band in fall 1994, going on to work with Don Henley and others. But he did join the Heartbreakers for their 2002 Rock & Roll Hall of Fame induction. In Conversations With Tom Petty, he said that despite the acrimonious split, he had high regard for Lynch, who also provided harmony vocals. “He was so powerful, I used to say he had this fifth gear that he could go into and just really make everything explode,” Petty explained. “And he knew the songs really well. He and I had incredibly good communication onstage. … I could turn around and look at him, and he knew just exactly what I wanted to do.” Steve Ferrone, who appeared on 1996’s Songs and Music From “She’s the One,” took Lynch’s place and remained with the Heartbreakers until Petty’s death.

We count down every Tom Petty album, including solo work and those with the Heartbreakers.