10 Most Controversial Rock Stories of 2021 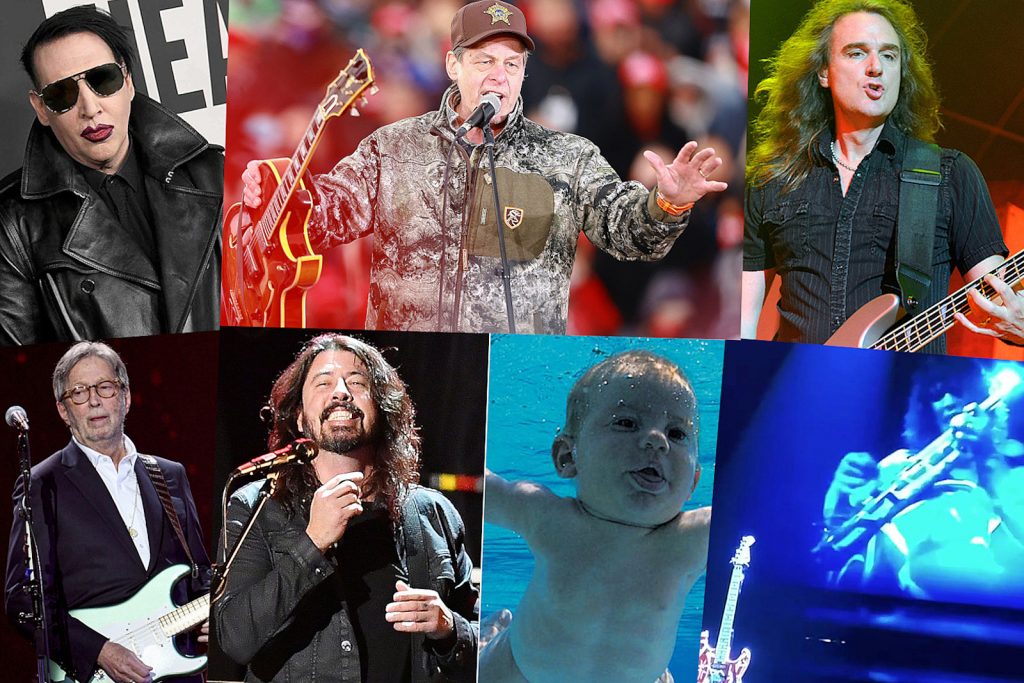 Looking back at the past 12 months, one thing becomes apparent: 2021 wasn’t lacking in controversy.

The ongoing pandemic – and political points surrounding it – continued to foster drama. Like Americans across the country who remain divided on topics like vaccinations, masking guidelines and lockdown laws, rock stars found themselves picking a side in the debate.

Other sources of contention this past year included sex scandals, arrests, opinionated public remarks and questionable decision-making. We run down the 10 Most Controversial Rock Stories of 2021 below.

Nirvana Sued by Nevermind Baby
In August, Spencer Elden, the man who as a baby was featured on the iconic cover image to Nirvana’s Nevermind, sued the band’s former members, management and the late Kurt Cobain’s estate, claiming he was exploited for the picture. “Neither Spencer nor his legal guardians ever signed a release authorizing the use of any images of Spencer or of his likeness, and certainly not of commercial child pornography depicting him,” court documents read in part. The suit further alleged that Cobain agreed to put a sticker over Elden’s genitals in the famous artwork, a promise that was never fulfilled. He claims to have suffered “lifelong damages” as a result of the picture. For his part, Dave Grohl said he was paying very little attention to the lawsuit. “I think that there’s much more to look forward to and much more to life than getting bogged down in those kinds of things,” he explained. “And, fortunately, I don’t have to do the paperwork.”

Megadeth bassist and co-founder David Ellefson found himself in hot water after graphic images and text exchanges between himself and a fan were leaked online in May. Rumors quickly spread that the woman involved was actually an underage girl whom the rocker was trying to groom. Ellefson denied the allegations, stating that the interaction was taken out of context. Initially, Megadeth withheld action, waiting to get further details on what was going on. Police reports later showed that Ellefson had multiple virtual sexual interactions with a 19-year-old Dutch fan. Megadeth eventually dismissed the bassist and removed the bass tracks he had already recorded from their upcoming album. James LoMenzo would later become the band’s touring bassist. Meanwhile, Ellefson announced he would seek revenge-porn charges as a result of the incident, later likening his ordeal to Jesus’.

“That’s it?” That was the collective response from rock fans who tuned in to the Grammy Awards broadcast in March. Most viewers expected the Grammys to honor Eddie Van Halen, the iconic Van Halen guitarist who died in October 2020. During the “In Memoriam” segment, a camera panned to one of Van Halen’s famous striped guitars, lit by a single spotlight. In the background, footage of the guitarist performing “Eruption” was projected onto a screen. And then it was over. After about 15 seconds, the segment moved on to other deserving honorees. Considering how the Grammys have honored other departed greats – Prince and David Bowie received expanded tribute performances by Bruno Mars and Lady Gaga, respectively – Van Halen fans saw the comparatively short celebration of the guitarist as a slap in the face. “Maybe an artist that reimagined how one plays an instrument, who continues to influence generations of musicians and literally changed the course of rock ‘n’ roll deserves more than 15 second[s] at the Grammys?” former Van Halen singer Gary Cherone declared on Twitter, echoing the cries of many rock fans. As it turned out, Eddie’s son, Wolfgang, had been invited to perform on the awards show but declined the offer. “It was my understanding that there would be an ‘In Memoriam’ section where bits of songs were performed for legendary artists that had passed,” Wolfgang later noted. “I didn’t realize that they would only show Pop for 15 seconds in the middle of four full performances for others we had lost.” Though the younger Van Halen expressed disappointment in how the tribute was handled, he noted that his father would probably be laughing. “Pop would probably just laugh it off and say, ‘Ehh, who gives a shit?’ He was only about the music anyway. The rest didn’t matter.”

Eric Clapton made many headlines this year, but most of them weren’t music-related. After initially voicing his polarizing opinions about COVID-19 vaccines and lockdowns in 2020, the legendary guitarist doubled down on his stance in 2021. Clapton released further protest songs, spoke out against venues requiring proof of vaccination and even accused Rolling Stone of conducting a “slur campaign” against him. Many of the rocker’s views stemmed from his own complications from the AstraZeneca vaccine, an ordeal he detailed in a May interview. Still, Clapton’s vocal opposition to health and safety restrictions led him to be ostracized by many of his friends, including blues guitarist Robert Cray. “I’d just rather not associate with somebody who’s on the extreme and being so selfish,” said Cray, who especially took offense to references to slavery in Clapton’s anti-lockdown song “Stand and Deliver.” “We started playing a music that wasn’t particularly popular to start off with at the time we started playing. We’ve gained some notoriety, and I’m fine with that, but I surely don’t need to hang out with Eric Clapton for that to continue.”

In February, the public learned that Bruce Springsteen had been arrested and charged with driving while intoxicated, reckless driving and consuming alcohol in a closed area. The accusation stemmed from an incident in November 2020, when the legendary singer-songwriter was riding his motorcycle through New Jersey’s Gateway National Recreation Area. Springsteen was reportedly recognized by some fans who asked him to take pictures and offered him some tequila, which he accepted. Soon afterward he was pulled over by police. That the arrest came to light in February – at the same time Springsteen appeared in a Super Bowl commercial for car company Jeep – only further amplified the attention. Two charges were eventually dropped, while Springsteen pleaded guilty to a third, lesser charge. He would pay a $540 fine for the misdemeanor.

In February, Evan Rachel Wood came forward with allegations she was “horrifically abused” by Marilyn Manson for years. “I was brainwashed and manipulated into submission,” the actress declared in a post to social media. In the wake of her claims – which pointedly addressed rumors about Manson that had circulated for years – several other women stepped forward to allege similar abuses. The shock-rocker’s label would soon sever ties with Manson despite his insistence that the claims were untrue. Months later, Rolling Stone published an extensive expose covering the accusations levied against the singer, reporting, among other things, that the musician had a “bad girls” room in his home that he used to psychologically torture women. In November, police searched Manson’s home as part of the still-ongoing investigation.

Brian May Nearly Gets Canceled Over Cancel-Culture Comments

In late November, Brian May turned heads with some comments made to the U.K.’s ITV network. “I’m sure … [Queen] would be forced to have people of different colors and different sexes and a trans person – but life doesn’t have to be like that,” May said while voicing his concerns over cancel culture. The guitarist’s comments, which came after the BRIT Awards eliminated its male and female categories in favor of an all-inclusive, non-gender artist of the year category, received harsh criticism, especially from those who interpreted them as derogatory toward the trans community. May later stated that his words were “subtly twisted” and blamed “predatory press hacks” for making him seem “unfriendly to trans people.” “Sincere apologies to anyone who has been hurt by the stories,” he proclaimed in a message posted to social media. “My heart is open as always to humans of all colors, all creeds, all sexes and sexualities, all shapes and sizes – and all creatures.”

Metallica Get Censored
Due to the ongoing pandemic, music fans were already more than used to virtual concerts by the time 2021 arrived. Still, nothing could have prepared them for Metallica’s performance during the BlizzCon gaming convention. The iconic metal act was set to close the virtual event with a rendition of “For Whom the Bell Tolls” delivered from its studio. However, those streaming on Twitch were met with a surprising twist. Rather than broadcasting the performance in its natural state, the audio was cut out and replaced with generic synth music in a move to avoid later trouble regarding copyrights. “The upcoming musical performance is subject to copyright protection by the applicable copyright holder,” read a message onscreen. Meanwhile, fans who were hoping to see – and hear – Metallica were understandably outraged.

Ted Nugent
Love him or hate him, there’s no denying Ted Nugent is a lightning rod for controversy. The right-wing rocker ended 2020 with an exclamation point, calling COVID-19 “not a real pandemic” and emphatically declaring “Fuck you and your bullshit vaccine.” Less than four months later, Nugent announced he had contracted COVID-19. Though he at one point believed he wouldn’t survive the ordeal, he continued to voice his displeasure with vaccine mandates, mask laws, lockdowns and other pandemic-related restrictions. But COVID comments weren’t Nugent’s only controversial remarks. The guitarist also used the n-word while describing the “greatest compliment” he’s been given and expressed support for acquitted killer Kyle Rittenhouse.

Rock & Roll Hall of Fame Snubs
There will always be debates over who does and does not deserve enshrinement in the Rock & Roll Hall of Fame, but arguably the loudest cry came from those demanding metal artists get their due. Iron Maiden, Judas Priest, Motorhead, Dio and Motley Crue all remain on the outside looking in, while Ozzy Osbourne – who was inducted as a member of Black Sabbath – has yet to be honored as a solo artist. Reacting to outcry about Maiden’s absence specifically, the Hall of Fame’s CEO admitted the group was “an impactful, influential band.” “I think to get to the core of it, people like the stuff that’s closest to them, and I think they need to expand their thinking of rock ’n’ roll,” he explained. “It’s a big tent. Rock ’n’ roll was never just four skinny guys with long hair and guitars. It’s always been diverse. We take that interpretation that these are all variants of rock ’n’ roll.”