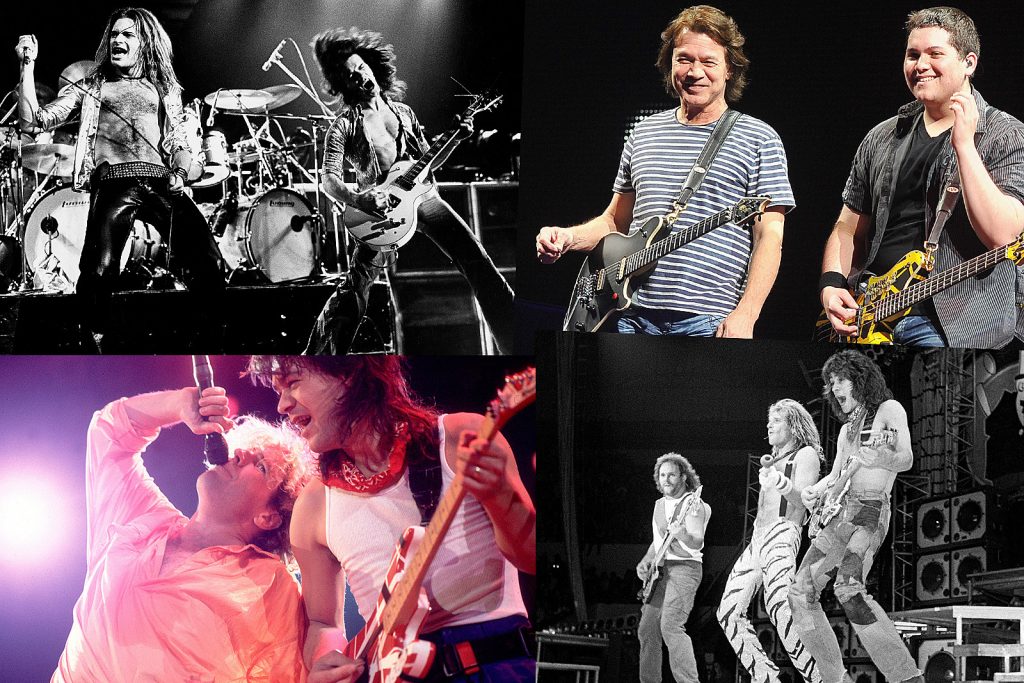 Eddie Van Halen was most at home onstage.

The six-string virtuoso revolutionized hard-rock guitar with his dizzying two-handed tapping, harmonic squeals and wild dive-bombs. But Van Halen was no mere bedroom shredder. Tantamount to his otherworldly chops was his dynamic stage presence. When you think of Eddie Van Halen now, it’s nearly impossible not to picture him flying through the air while doing one of his signature split jumps, megawatt grin plastered across his face.

Van Halen began getting his live-performance reps while he was still in elementary school, playing piano in a group called the Broken Combs with his brother, Alex, on saxophone. Eddie and Alex eventually graduated to guitar and drums, respectively, and continued to cut their teeth on the Pasadena backyard party circuit with various iterations of the band that eventually became the mighty Van Halen.

By 1974, Van Halen had become the house band at the West Hollywood nightclub Gazzarri’s, where they built a reputation as the hottest ticket in town. During those formative years, they further honed the chops and stage theatrics that would take them to the top of the world and keep them there for nearly four decades, until they retired from the stage in 2015, five years before Eddie’s death in 2020.

From his high-school party days to his final curtain call, here are 12 Landmark Eddie Van Halen Shows from his illustrious career.

Eddie and Alex Van Halen’s musical bond dated back to their childhood. While they were still in elementary school, they played in a band called the Broken Combs, featuring Eddie on piano and Alex on tenor saxophone. Dana MacDuff, who went to school with the brothers, recalled seeing them play in the book Van Halen Rising: “I was a third-grade student at Hamilton Elementary School. We’d have lunch outside near the pergola, and there’d be performances for the student body. One day there was a band playing; it was Ed and Al, and their band was called the Broken Combs. I was totally unaware that they were budding musicians.”

David Lee Roth made his live debut as an official member of Mammoth, the band’s pre-Van Halen moniker, in summer 1973 at one of the myriad backyard parties the group played in its early days. It was an inauspicious beginning, with Roth recalling in his autobiography Crazy From the Heat that “the audience hated it!” One problem was that Roth, an avowed fan of glam, pop and soul music, was neither familiar with nor interested in the Van Halen brothers’ heavy metal repertoire. Roth eventually convinced Mammoth to add some pop and dance numbers to their sets, and their local profile continued to grow.

Michael Anthony’s indoctrination into Van Halen’s backyard party scene came in June 1974, when Don and Mary Ann Imler embarked on a monthlong trip to Mexico. In their absence, their kids — 22-year-old son Denis and teenage daughters Debbie and Karen — planned a house party and booked Van Halen as the evening entertainment. It was a predictably rowdy show that further established Van Halen as local kingpins, but Anthony was more rattled by the mandate to wear eye-catching stage clothes — the kind of threads that helped them stand out on the Sunset Strip when they served as the house band at Gazzarri’s. “My [future] wife had made a gold lame outfit for me,” Anthony recalled in Van Halen Rising. “I could barely bring myself to walk through the crowd wearing it.”

A diamond-selling album and No. 1 single weren’t enough to keep Van Halen intact; in fact, the band members’ disagreements over what musical direction to take on the poppy, keyboard-heavy 1984 presaged their collapse. Despite his cheerful facade while talking to the press, David Lee Roth distanced himself from his bandmates on the 1984 tour, traveling to sold-out shows by himself. The trek ended with a Monsters of Rock Tour stop on Sept. 2, 1984, in Nuremberg, Germany. It marked the original Van Halen lineup’s final show, and Roth’s last show with the band until 2007.

Read More: When Van Halen Played Their Last Concert With the Original Lineup

Van Halen MKII made their triumphant live debut on March 27, 1986, at Shreveport, La.’s Hirsch Memorial Coliseum. Sammy Hagar later told UCR it was “stupid” that the new lineup “rebelled against our pasts” by featuring so much of Van Hagar’s three-day-old debut album, 5150, rather than more familiar songs from both artists’ catalogs. Nevertheless, the sold-out show was a huge success from the opening notes of “You Really Got Me” to an encore performance of Led Zeppelin’s “Rock and Roll” (which Hagar and Van Halen had previously played together at 1985’s Farm Aid, where they announced their new partnership — sort of). The rapturous audience response even emboldened Hagar to sport a “Dave Who?” shirt at one point during the set.

Van Halen’s exhaustive, injury-plagued Balance tour staggered to an end on Nov. 5, 1995, in Honolulu. Sammy Hagar’s first tenure with the band would soon follow suit. In his 2012 memoir Red: My Uncensored Life in Rock, Hagar recalled receiving a 2AM phone call from Eddie that hastened his departure. “‘What are you going to do when we get back?’ he said. … ‘I don’t know,’ I said. ‘Take some time off. What are you going to do?’ ‘I don’t know yet,’ he said. ‘When I figure it out, I’ll let you know. I’ve got some plans, but I’ll let you know if it involves you or not.’ ‘Okay,’ I said. ‘Fuck you.’ I hung up the phone.”

Read More: The Phone Call That Began the End of Sammy Hagar and Van Halen

Longtime Extreme front man Gary Cherone made his live debut with Van Halen on April 10, 1998 at Wellington, New Zealand’s Queens Wharf Event Centre. Far away from the U.S. media’s glaring headlights, the new lineup tore through a career-spanning set that included a few Hagar-era hits (“When It’s Love,” “Dreams,” “Right Now”) and a generous helping of Roth-period classics (“Unchained,” “Panama,” “Jump”), plus resurrected album tracks like “Mean Street,” “Romeo Delight” and “Somebody Get Me a Doctor.” They also played a half-dozen tracks off the newly released Van Halen III, which underperformed critically and commercially and led to Cherone’s quick departure. At first, though, they were living it up, and their April 20 concert in Sydney was later broadcast on MTV‘s Live From the Ten Spot.

Gary Cherone’s brief tenure fronting Van Halen might not have had the headline-grabbing drama of his predecessors, but it also lacked the critical acclaim and massive album sales. Less than 10 months after making his live debut, Cherone performed his last concert with the band in Yokohama, Japan, on Nov. 2, 1998. The tour, much like the Cherone-fronted Van Halen III, was met with lukewarm sales, and almost exactly one year after completing the trek, Cherone was dismissed on Nov. 5, 1999.

After reconciling and recording a trio of new songs for 2004’s Best of Both Worlds compilation, Van Halen launched a disastrous reunion tour with Sammy Hagar that kicked off on June 11, 2004, in Greensboro, N.C. The 80-date trek was marred from the start, as the Van Halen brothers no longer wanted to work with Michael Anthony, but his involvement was non-negotiable for Hagar. Anthony ultimately participated in the tour, but only after taking a pay cut and signing away his rights to the Van Halen name and logo.

Van Halen’s ill-fated reunion tour with Sammy Hagar ended on Nov. 19, 2004, at the Anselmo Valencia Amphitheater in Tucson, with a performance infamously referred to as “Black Friday” among some fans. Hagar later described it as “the worst show we’d ever done in our lives,” noting that Eddie “played so bad” that night. The guitarist smashed his guitar onstage and reportedly told the audience through tears, “You don’t understand.” Hagar later called Van Halen’s 2004 tour “some of the most miserable, backstabbing dark crap I’ve ever been involved with my whole life.”

Sept. 27, 2007, was an epic night in Charlotte, N.C., for Van Halen fans who had been longing for the band’s original singer to reaffirm his position at the mic. It wasn’t a full-fledged reunion, as a 16-year-old Wolfgang Van Halen had replaced Michael Anthony on bass. Still, the youngest Van Halen capably filled Anthony’s shoes and injected youthful energy into the set, which featured several Roth-era classics and deep cuts like “Hot for Teacher,” “Ice Cream Man,” “Little Dreamer” and “Beautiful Girls.” During “I’m the One,” Roth made a wry nod to his 23-year employment gap with Van Halen, quipping, “It only took 20 years to get this fucking far!”

Van Halen’s final concert was a hometown gig on Oct. 4, 2015, the second of two nights at the Hollywood Bowl in Los Angeles, almost exactly five years to the day before he died. The 23-song show opened with “Light Up the Sky” and ended with “Jump,” and both Van Halen brothers got their moments in the spotlight. Alex played a mid-set drum solo following “I’ll Wait,” while Eddie incorporated elements of “Little Guitars,” “Mean Street,” “Spanish Fly,” “Eruption” and “Cathedral” into his solo. On Oct. 4, 2021, Wolfgang acknowledged the show in a tweet. “It was the last show we ever did, and it was the last show I ever played with my dad. I’ll never forget it,” he wrote. During the previous night’s show, David Lee Roth thanked his longtime sparring partner for 40 years of magic “The best years of my life, the high points of all my life — onstage with you, homeboy,” he said. “I will always do the half-Jesus towards you, Eddie Van Halen.”

The Best Song From Every Van Halen Album

They released a dozen albums over their career. These are the songs for your playlist.