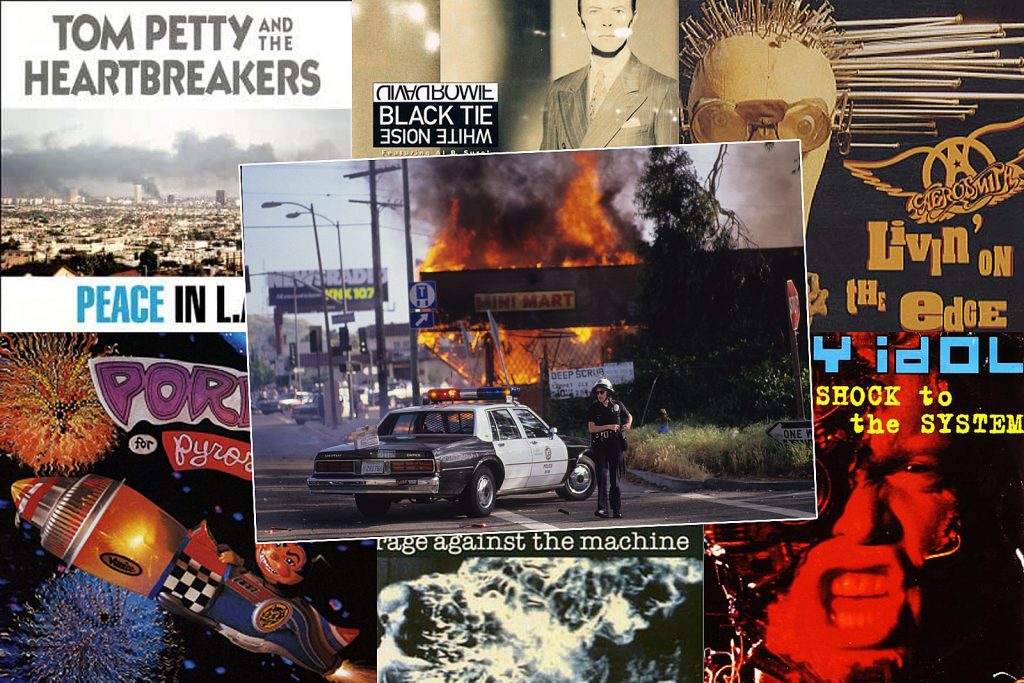 On April 29, 1992 a jury acquitted four police officers who had been accused of violently beating Rodney King.

The decision sent shockwaves through Los Angeles and across the country. Video evidence showed the officers brutally attacking King, an African American man who had been pulled over for speeding and resisting arrest. To many, the violence inflicted on a Black man at the hands of four white cops was emblematic of racial injustice in police departments across the country.

The officers’ acquittal sparked outrage. Protests quickly turned to riots, as parts Los Angeles endured fires, vandalism and looting for several days. The chaos was so overwhelming that L.A. was placed under and the National Guard was called in to assist.

Music is often a reflection of the era in which it was created. Cultural, societal and political events have always shaped songs. And, given their historical significance, it’s no surprise that the riots influenced a wide range of tunes. Here are 12 notable rock songs that were influenced by the 1992 Los Angeles riots.

David Bowie, “Black Tie, White Noise”
Fateful timing put David Bowie and his newlywed wife, Iman, in Los Angeles on the day of the riots. The couple were searching for a new home when the mayhem commenced and ended up watching everything unfold through their hotel room television. “It was an extraordinary feeling,” the singer recalled in the book Hallo Spaceboy: The Rebirth of David Bowie. “I think the one thing that sprang into our minds was that it felt more like a prison riot than anything else. It felt as if innocent inmates of some vast prison were trying to break out, break free from their bonds.” The experience would inspire “Black Tie, White Noise,” the title track from Bowie’s 1993 album, which features such lyrics as “Lit by the glare of an L.A. fire (Black tie, white noise) / I’ve got a face, not just my race.”

Rage Against the Machine, “Killing In the Name”
One of the most famous songs in Rage Against the Machine’s catalog was directly inspired by the events of the L.A. riots. The group was working on their debut album when the events of April 29 unfolded. Already politically minded and proudly radicalized in their ideals, the band began formulating what would becoming “Killing in the Name.” “I was in L.A. when the whole Rodney King episode went down,” producer Garth Richardson later explained. “That was a big thing for the city. Zack [De la Rocha] and I had a long talk about the power of speech and how whatever he needed to say, he had to say it. Malcolm X was a major influence in Zack’s life, and this was not the time to back down.” From those beginnings rose such famous lines as “Some of those that work forces / Are the same that burn crosses” and “Those who died are justified / For wearing the badge / They’re the chosen whites.”

Aerosmith, “Livin’ on the Edge”
What kind of “Instant Karma”-style song would John Lennon have written following the riots? That’s the question that went through the mind of Mark Hudson. The songwriter had come up with an idea prior to his 1992 session with Aerosmith, but hadn’t intended to play it for the band. After churning through a series of other ideas, frontman Steven Tyler asked Hudson what he would bring to the table if he were a member of Aerosmith. Initially caught off guard by the question, Hudson began to play his Lennon-esque tune. The opening lines, “There’s something wrong with the world today / I don’t know what it is / Something’s wrong with our eyes,” immediately struck a chord with Tyler. Released in 1993, “Livin’ on the Edge” would become a Top 20 single for Aerosmith, later earning the band a Grammy.

Tom Petty & the Heartbreakers, “Peace in L.A.”
After touring in Europe, Tom Petty & the Heartbreakers returned home to Los Angeles just before the riots. “We got back and all hell broke loose,” Petty later said. “And I just had the feeling that the word `peace’ needs to be on the radio. We just need to hear ‘peace, peace, peace.’” Petty quickly assembled his team to record a new song dubbed “Peace in L.A.,” a heartfelt call for calm amongst the chaos. “We need peace in L.A., what happened was wrong / We all feel betrayed, but we got to be strong / If the powers that be let evil go free / You must understand, don’t play into their hand.” The song was rushed to radio, where it immediately received airplay. “I left the mastering lab and heard it over the air driving home,” Petty once remarked. All proceeds from the song went to Los Angeles based charities.

Sublime, “April 29, 1992”
Ignoring the fact that lead singer Bradley Nowell says the wrong date in the song’s lyrics – the frontman begins “April 26, 1992 / There was a riot on the streets / Tell me where were you?” – Sublime’s “April 29, 1992 (Miami)” is a firsthand account of the L.A. riots. Throughout the tune, Nowell details the looting and “anarchy” that accompanied the historic event. While the Sublime track alludes to the racial tensions that influenced the riots, it also argues that the furor was more about the lower class raging against unjust social structure. “They said it was for the black man / They said it was for the Mexican, and not for the white man / But if you look at the streets, it wasn’t about Rodney King / It’s this fucked-up situation and these fucked-up police / It’s about comin’ up and stayin’ on top / And screamin’ 1-8-7 on a motherfuckin’ cop.”

The Offspring, “L.A.P.D.”
Punk rockers the Offspring were just starting to make a name for themselves in the Southern California music scene when the L.A. riots occurred. Their second studio album, Ignition, would arrive in October of ‘92, and with it came the song “L.A.P.D.,” focused on racism and corruption in the police. The entire track featured powerful, pointed lyrics, such as: “The city of L.A. feels like a prison / With helicopters overhead and bullets whizzing by / Martial law ain’t no solution / Police brutality’s just social pollution.”

Billy Idol, “Shock to the System”
Billy Idol had begun work on what would be his fifth studio album right around the time of the riots. On April 30, 1992 he was scheduled to work on a new song — which would become “Shock to the System” — with his band in L.A.. “So we all came up to my house to start doing the song and you could see L.A. and you could see all the fires raging,” he later recalled. “And there was ash falling from the sky. And it was like, as if L.A. was replaying the Gulf War.” The song’s lyrics would be directly influenced by the event, including lines about L.A. “burning bright,” “police and civil corruption” and “a man who would be king.”

Machine Head, “A Nation on Fire”
On their debut album, heavy metal band Machine Head referenced the riots in two different ways. The group used audio from news reports at the time for their song “Real Eyes, Realize, Real Lies.” Meanwhile, lyrics to the track “A Nation on Fire” came directly from frontman Robb Flynn seeing how the riots resonated in his area in Northern California. “The LA riots had just happened, after the Rodney King trial, and those riots happened everywhere; they happened all over Oakland and all over Berkeley, and I remember when I wrote the lyrics to that song I was living in Berkeley and I heard all this shit was going off,” the singer recalled to Kerrang years later. “Rather than do the smart thing like everybody else, which was to stay in the fucking house, I jumped on my mountain bike, like, ‘I wanna go to the riot!’ I literally rode my mountain bike into this riot that was happening on Telegraph Avenue, because I wanted to feel alive and absorb this crazy moment it time. It was insane! There was people lighting cop cars on fire, and tear gas between protesters and police. I got chased by a gang of protesters and then went right into a gang of police, and they were chasing me. I’m literally pedaling for my life and people are taking swings at me. It was crazy. After that, all of those lyrics for ‘A Nation on Fire’ just came pouring out.”

Downset, “Anger”
Rodney King’s story struck close to home for Rey Oropeza, frontman of Los Angeles hardcore/nu metal group Downset. It’s a connection the singer would make on the band’s 1994 debut album, specifically on the opening track “Anger.” “I hate L.A. swine with a passion, G / ‘Cuz my pops was killed by the fucking L.A.P.D / Yes they killed my daddy, yup they killed my daddy / And if I don’t blast ’em back, you know they gonna fucking kill me,” Oropeza proclaims at one point in the song. Later, he declares, “April 29, L.A., swine not guilty / Fools down for the payback on Florence and Normandie,” a reference to the intersection where Reginald Denny was beaten during the riots.

Bad Religion, “Don’t Pray for Me”
SoCal punk group Bad Religion referenced the riots in the opening lines to their 1993 song “Don’t Pray for Me.” “A grizzly scene on my electron beam told a story about human rights / So all the king’s horses and all the king’s men had a riot for two days and nights,” frontman Greg Graffin proclaimed on the track. The song’s overall theme was about violence and murder, and the lengths men go to to justify their actions.

Honorable Mention: Body Count, “Cop Killer”
Body Count, the heavy metal band fronted by Ice-T, initially wrote “Cop Killer” in 1990. The track – partially inspired by Talking Heads “Psycho Killer” – was a response to the exact type of injustice and brutality that spawned the L.A. riots. The studio version of “Cop Killer,” recorded in 1991, featured updated verses that referenced Rodney King and Los Angeles police chief Daryl Gates. While these lyrics were inspired by the LAPD’s videotaped assault on King, the song would be released prior to the April ‘92 verdict (and the riots that ensued).