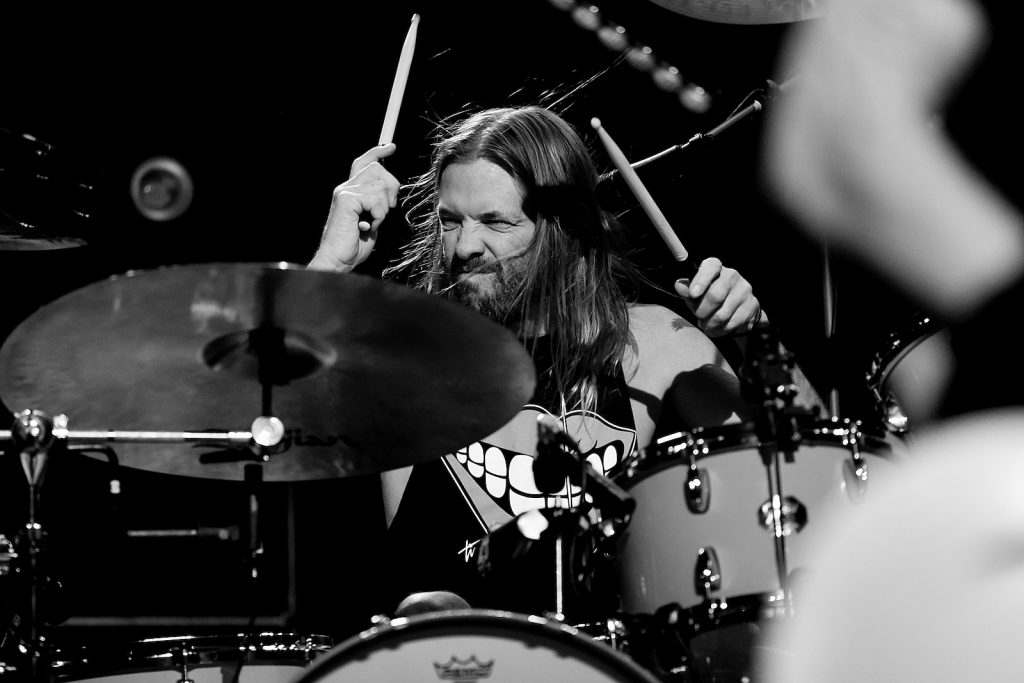 Foo Fighters drummer Taylor Hawkins, who died on March 25 at the age of 50, was first and foremost a rock ‘n’ roll fan. Even from an early age, Hawkins showed signs of his fierce musical future.

“I taught myself to play,” he told Modern Drummer in 2011. “I always played too hard as a kid. Band teachers would tell me, ‘You’re playing too hard.’ They threw me out of jazz band in high school. Again, ‘You’re too loud, too fast.'”

It worked out in his favor. Hawkins’ stint playing drums on Alanis Morissette’s Jagged Little Pill tour bled into his joining of Foo Fighters in 1997, just after the release of their second album, The Colour and the Shape.

Over the next quarter of a century, Hawkins would not only play drums for the Foos, but also branch out with his own side projects: the Coattail Riders in 2004, which released three albums; Chevy Metal, a rock cover band formed with longtime friends Wiley Hodgden and Mick Murphy; and, most recently, a supergroup billed as NHC with two members of Jane’s Addiction, Dave Navarro and Chris Chaney.

At the heart of it all was Hawkins’ deep love of rock ‘n’ roll and admiration for those who came before him. We’re taking a look at 20 covers and collaborations — just the tip of the iceberg — that wouldn’t have been the same without Hawkins.

At the top of 2015, Foo Fighters performed an epic charity show for Dave Grohl‘s 46th birthday that featured guest appearances by countless rock legends, each arriving with their hits in tow. Paul Stanley of Kiss performed “Detroit Rock City” and “Do You Love Me,” Alice Cooper joined them for “I’m Eighteen” and “School’s Out,” David Lee Roth offered up “Panama” and “Ain’t Talkin’ Bout Love,” and the evening closed with a cover of Chuck Berry‘s “Let It Rock” featuring Lemmy of Motorhead, Slash and Zakk Wylde. Hawkins held it down behind the kit all night.

Who says the drummer can’t sing? Hawkins frequently stepped out to the front of the stage to sing lead vocals. In 2021, he covered David Bowie‘s “Ziggy Stardust” with his son, Shane, playing drums behind him.

Tom Petty and the Heartbreakers, “Breakdown”

Foo Fighters began covering Tom Petty and the Heartbreakers’ “Breakdown” in 2008, breaking it out 33 times in 2011 and 19 times in 2017. A few weeks after Petty’s death in October 2017, the band played “Breakdown” again and Grohl told the audience about his brief stint as a Heartbreaker, praising Petty as “the coolest motherfucker.”

“Let There Be Rock,” the gut-busting title track off AC/DC‘s fourth album, fit Foo Fighters like a glove. The band played the tune nearly 50 times between 2015 and 2019, with Hawkins’ incessant, monster grooves anchoring the blues-punk freakout.

Hawkins did double duty at a show in 2016, in which he both sang and played drums on a cover of Night Ranger‘s iconic hit, “Sister Christian.”

In 2022, NHC released a four-song EP, which included a cover of Pink Floyd‘s “Fearless” and a Level 42 song, “Something About You,” as well as two originals, “One and the Same” and “I Could Be Someone Else.” Hawkins also sang lead vocals when Foo Fighters covered Pink Floyd’s “In the Flesh” and “Have a Cigar.”

Soundgarden, “The Day I Tried to Live” (With Buzz Osborne)

In 2019, Hawkins appeared at a tribute show for late Soundgarden singer Chris Cornell, singing “The Day I Tried to Live” alongside Melvins guitarist Buzz Osborne.

Covering Rush is no small feat, but Foo Fighters pulled it off with aplomb, covering “Tom Sawyer” several times in 2015. Hawkins nailed Neil Peart‘s time signature shifts and massive grooves, and Jack Black memorably joined the band on vocals during a performance at the Los Angeles Forum in September 2015.

The only thing better than one legendary drummer is two. Hawkins joined Jane’s Addiction’s Stephen Perkins on drums during their Alive at Twenty Five anniversary concert celebrating their Ritual de lo Habitual album.

Hawkins took over vocals for Robert Plant when he sang Led Zeppelin‘s classic “Rock and Roll,” complete with Jimmy Page on guitar and John Paul Jones on bass, at Wembley Stadium in 2008.

The Rolling Stones, “Miss You” / “Bitch” (With Mick Jagger)

Hawkins routinely covered the Rolling Stones‘ “Miss You” and “Bitch” with both Foo Fighters and Chevy Metal. The ultimate validation came in 2012, when Mick Jagger joined Chevy Metal onstage at a Saturday Night Live afterparty and barreled through whip-cracking renditions of both songs.

Foo Fighters made their affinity for the Bee Gees clear with their 2021 Hail Satin tribute album, recorded under the Dee Gees moniker. The rockers began covering the disco kings’ “You Should Be Dancing” regularly in 2021, and Hawkins’ kick drum regularly sported a picture of Barry Gibb‘s face.

A typical Chevy Metal set list was a veritable who’s-who of classic-rock royalty, and those legends would occasionally get in on the fun themselves. Motley Crue bassist Nikki Sixx joined the band onstage in December 2018 at the Los Angeles Regional Food Bank for punkish renditions of “Looks That Kill” and “Live Wire.”

Queen, “Somebody to Love”

Singing a Freddie Mercury song is a Herculean task. Hawkins, however, appeared a natural at it, frequently singing lead on a cover of Queen‘s “Somebody to Love” at concerts. Over the years, Foo Fighters also tried their hand at songs like “Keep Yourself Alive,” “Tie Your Mother Down” (with Roger Taylor and Brian May themselves) and “Another One Bites the Dust.“

Foo Fighters released a cover of Prince‘s “Darling Nikki” as the B-side to their 2003 single “Have It All.” They’ve played it live several times since then, including a high-octane rendition at 2020’s Let’s Go Crazy: The Grammy Salute to Prince.

Pre-Foo Fighters, Hawkins provided the backbeat for Alanis Morissette as she promoted her hit 1995 album, Jagged Little Pill. “I just think she’s an amazing, amazing, amazing singer. And she gave me so many gifts, and one of them was just helping me get noticed,” Hawkins said of Morissette in 2020. “It’s because of her and I’ll never thank her enough for it. I love her to pieces and she’s my sister.”

Faces, “Stay With Me” (With Chad Smith)

Hawkins regularly flexed his pipes in Foo Fighters and Chevy Metal by covering the Faces‘ “Stay With Me.” He got a little help from Red Hot Chili Peppers drummer Chad Smith during a performance in July 2018 at New York’s Jones Beach Theater, giving Hawkins and Grohl plenty of time to mug at the front of the stage.

Guns N’ Roses joined Foo Fighters onstage in Italy in 2018 when both bands headlined Firenze Rocks, racing through a hyperspeed version of GNR’s “It’s So Easy” with Hawkins setting the pace with his furious drumming.