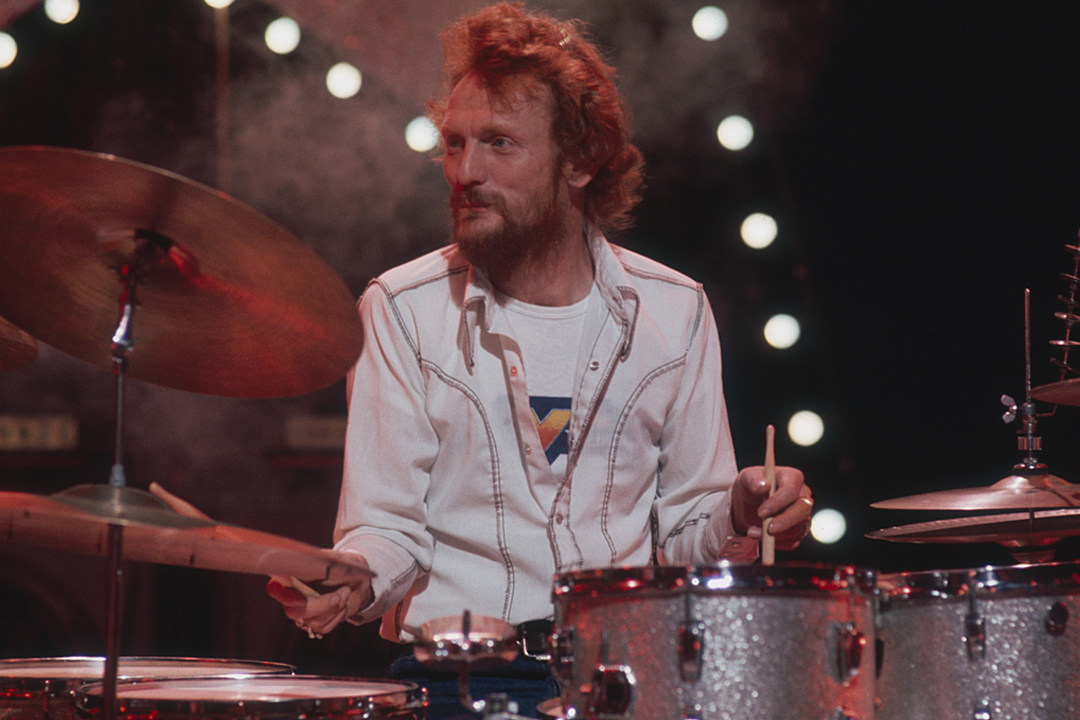 Cream drummer Ginger Baker died at the age of 80 on Oct. 6, his family confirmed.

He’d been struggling with failing health for some time and had been hospitalized after falling “critically ill” last month.

“We are very sad to say that Ginger has passed away peacefully this morning,” a brief statement on his Facebook page announced. “Thank you to everyone for your kind words to us all over the past weeks.”

He was born Peter Baker on Aug. 19, 1939, in Lewisham, England. His dad died four years later during World War II. As a youth, he was more interested in sports than music, but at age 15 he started playing drums, and by the early ’60s he was taking lessons from one of England’s most respected jazz players, Phil Seamen. His love of jazz music would influence his playing throughout his career.

Soon, he was in his first professional band, Alexis Korner’s Blues Incorporated, where he replaced Charlie Watts (who left to join the Rolling Stones) and met bassist Jack Bruce, with whom he’d play in the Graham Bond Organisation and then form Cream in 1966. From almost the start, their relationship was a tumultuous one, with the mercurial Baker often lashing out at his bass-playing bandmate.

But there was no denying the musical chemistry between Baker and Bruce. Once Eric Clapton was added to the mix in Cream, the group set on a brief but fiery path that helped steer the future of heavy, blues-influenced rock ‘n’ roll for years to come. They made four albums together – 1966’s Fresh Cream, 1967’s Disraeli Gears, 1968’s Wheels of Fire and 1969’s Goodbye – before Baker and Bruce’s constant fights prompted Clapton’s departure in 1968.

Baker made some of his greatest music during this era, helping to propel classic songs like “Sunshine of Your Love” and “White Room” to the top of the singles chart and to make Cream one of the period’s biggest bands. His self-penned instrumental “Toad,” which was on the group’s debut album and credited as one of the first rock drum solos on record, became a concert centerpiece, often stretching to 20 minutes.

Clapton and Baker would work again on their next project together, Blind Faith, a short-lived supergroup that also included Steve Winwood and bassist Ric Grech. They released one self-titled album, which hit No. 1, before disbanding.

From there, Baker formed Ginger Baker’s Air Force, a fusion group that spotlighted his jazz training and chops, and then spent much of the ’70s in Nigeria, where he made some of his most innovative tracks with Nigerian superstar Fela Kuti. He took a break from world music to record three hard-rock LPs with the Baker Gurvitz Army during the decade, but his love of African rhythms influenced his work from here on out. He eventually moved to South Africa.

Throughout the ’80s, Baker collaborated with various musicians in some wildly diverse projects, including making an album and touring with prog-rockers Hawkwind, joining Public Image Ltd. (led by former Sex Pistol John Lydon) for a spell and working with art-rock and electronic artist Bill Laswell. Throughout it all, he was one of rock’s most dazzling and impressive drummers, though he often bristled at being called a rock ‘n’ roll drummer, preferring instead to be called a jazz player.

In his last couple of decades, he joined Masters of Reality for an album, formed the Ginger Baker Trio and joined Cream for a series of reunion shows, which reopened some of his old battles with Bruce. He also wrote an autobiography and was the subject of a 2012 documentary, Beware of Mr. Baker, which didn’t shy away from his distancing personality and reputation as one of music’s difficult figures.

Over the years, he had run into other trouble, ranging from heroin addiction to money problems, exacerbated by his love of polo (he relocated to near Denver in the ’90s to be closer to the thriving sporting scene there). At the top of the decade, he announced that he had obstructive pulmonary disease. In 2016, he canceled a tour because of heart problems and then suffered a scary fall.

Baker’s website later confirmed that the drummer was recovering, but “any performances in the near future seem over ambitious.” In his last years, Baker largely retreated from the public eye. Then, on Sept. 25, 2019, his official Facebook page reported that Baker was “critically ill” and had been hospitalized, asking that fans “keep him in your prayers.”

Baker’s legacy can be heard today in drummers from a variety of fields, spanning rock and jazz to world and metal. His heavy style – solid and driving without ever missing a beat, and often steering the songs he was playing on into wild, exciting directions – allowed the drummers who followed him, including John Bonham and Keith Moon, to express their freedom behind the kit.

In spite of his polarizing personality, Baker’s playing still managed to count the most. Just listen to his groundbreaking work with Cream for timeless proof.