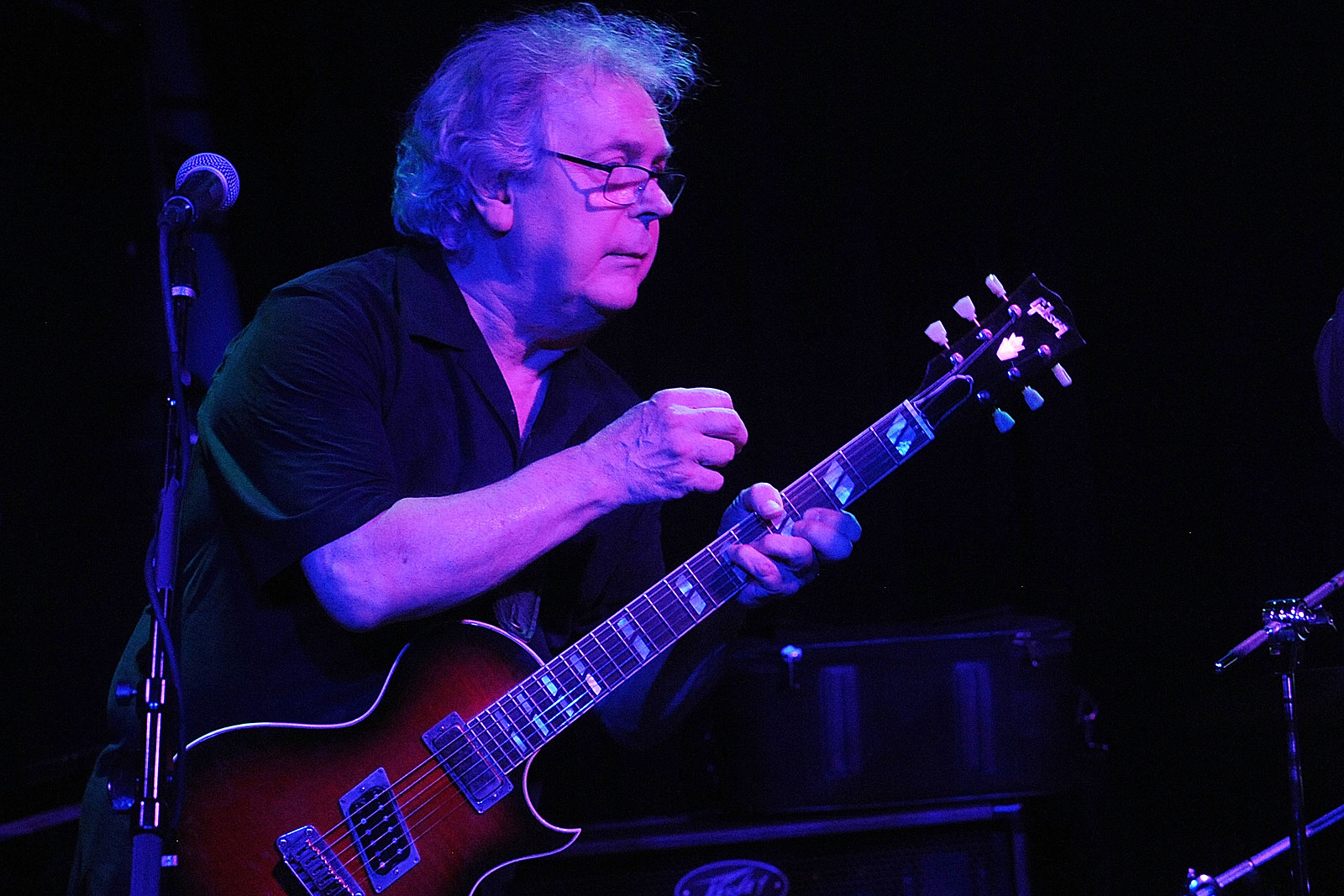 For a musician to achieve success once in a career is an impressive accomplishment. But to do so twice with two different bands is a remarkable feat. British multi-instrumentalist and producer Ian McDonald certainly belongs in the latter category.

In 1969, he co-founded the progressive rock band King Crimson, playing keyboards and woodwinds on their outstanding debut record, In the Court of the Crimson King, before leaving. Seven years later, McDonald joined Foreigner and enjoyed tremendous commercial success with that group’s first three albums, Foreigner, Double Vision and Head Games.

Long after his tenure with those two iconic bands, McDonald remains active with his most recent group, the New York City-based Honey West that includes singer and songwriter Ted Zurkowski. Not quite sounding like King Crimson or Foreigner, Honey West’s music is rootsy, stripped-down guitar-oriented rock that recalls early ’70s classic rock in the vein of the Rolling Stones and Mott the Hoople. In 2017, the group released Bad Old World, recorded with former Wings drummer Steve Holley and McDonald’s son Maxwell on bass, It was recently reissued on 180-gram vinyl.

“I’ve always tried to do some things a little bit different to keep things interesting,” McDonald tells UCR about Honey West and Bad Old World. “This is not really a so-called progressive-rock type of situation. It’s more of a two guitars-bass-drums type thing, and my production additions and orchestrations.”

A longtime resident of New York City, McDonald knew Zurkowski, an actor, since both lived in the same neighborhood. He later went to see Zurkowski perform onstage with an earlier version of Honey West. “I thought it would be a good opportunity for me to get stuck into something serious at that time,” McDonald recalls. “I felt like maybe I can help the band a little bit if they would allow me, and they could help me reestablish my production work. That led to writing songs [with Zurkowski ] and me actually joining Honey West. The group then went through a few personnel changes once I was in, and we ended up with quite a nice-sounding group.”

Musically, Bad Old World verges between lean and uptempo rockers such as “The September Issue,” the title song and “Dementia,” and occasional ballads like the poignant “She’s Not Your Life” and “Sailing.” Another track, “Sylvia Strange,” even incorporates some Caribbean influences.

“There are a lot of different styles within the group format,” says McDonald, “I think production-wise, I’m making some of my best work. I really wanted to make sure that we had a good-sounding album with good arrangements, playing, mixing and mastering. I’m pleased at the way it turned out.”

In Kurkowski, McDonald found an ideal collaborator. “Ted is a great writer of lyrics as well as a singer,” he explains. “I was very pleased to meet him because I’ve been hoping to meet a good lyric writer. That is the basis of the songwriting. And we applied that to your typical two guitars-bass-drums live format [in the studio]. It’s a lot of fun.”

The band plans to do more shows in the immediate future, and McDonald hints at the possibility of recording another Honey West record. “We do have a number of new songs that will end up on the second [album] for this configuration of the band,” he says. “We have to make the most of this album first before we can go back in the studio. But that’s definitely the plan, because we’ve got some really good songs coming up.”

Quite fittingly, the vinyl reissue of Bad Old World neatly puts McDonald’s professional career in full circle as this year marks the 50th anniversary of King Crimson, which featured himself, guitarist Robert Fripp, bassist and singer Greg Lake, drummer Michael Giles and lyricist Peter Sinfield. The group’s debut album, In the Court of the Crimson King, is considered one of the greatest progressive rock albums ever.

“Someone asked me, ‘Are you surprised people still talking about this record 50 years later?’” McDonald says. “I said, ‘Well, yes. But on the other hand, not really.’ When we made it — and I was basically at the forefront of the production — I wanted to make sure if I could deliver everything that went into the record would bear repeated listening and hopefully stand the test of time. And so in that regard, I’m not surprised. I’m very pleased and honored, and it’s amazing that it has been 50 years.”

King Crimson’s first-ever gig occurred at the Speakeasy club in London on April 9, 1969, and started a buzz among music and media circles. ”Those early shows were fantastic,” McDonald recalls. “They were a mixture of arranged songs and group improvisations. One of the songs, [Donovan’s] ‘Get Thy Bearings,’ was a vehicle for improvisation. … They could be quite adventurous, quite wild sometimes. And the arranged songs such as ‘The Court of the Crimson King’ and ‘Epitaph,’ were more structured. Speaking of ‘Epitaph,’ I think that’s my favorite successful song in terms of the writing and structure and production and everything else.”

The group’s profile heightened on July 5 of that year when they opened up for the Rolling Stones at London’s Hyde Park and played to an estimated audience of 650,000. “At that time we still had the residency at the Marquee,” McDonald says, “and we were getting quite a bit of attention. But after the Hyde Park Stones show, it put us on the map as it were.”

That same month, the members of King Crimson began recording on what become In the Court of the Crimson King first with Moody Blues producer Tony Clark; they later decided to produce the album themselves. Featuring Fripp’s guitar work, McDonald’s Mellotron and woodwinds playing, Giles’ dazzling drumming, and Sinfield’s imaginative lyrics, the record offered a snapshot of the group’s electrifying chemistry onstage. “Some of the groups improvisations were a lot of fun,” says McDonald, who co-wrote all of the album’s songs, “and we had a lot of a lot of trust in one another on stage. That’s what made the improvisations work. There was also a lot of energy. “21st Century Schizoid Man” was a monster live. And we played calmer things like “I Talk to the Wind.” I like having that kind of contrast.”

In the Court of the Crimson King was released on Oct. 10, 1969, to positive reviews; the Who’s Pete Townshend once called it “an uncanny masterpiece.” Following a U.S. tour in December, both McDonald and Giles left the group and recorded their own album, McDonald and Giles. After working with Marc Bolan on T. Rex’s 1971 classic album Electric Warrior, McDonald guested on King Crimson’s 1974 Red album. He was on board to become a member of Crimson again until Fripp disbanded the group. But it didn’t take long for McDonald to find himself in another band, Foreigner, which he co-founded with Mick Jones.

“Things have a sort of way of working out,” McDonald says. “I used to say, ‘Oh, I shouldn’t have left Crimson when I did.’ But I don’t think that way anymore. I believe that was meant to be, because many wonderful things happened as a result of me doing that. Perhaps I should have stayed for the second album [In the Wake of Poseidon], but then things would’ve been different in my life and so on. But you can’t change history like that. So I accept where I am and the journey that I’ve been on since leaving Crimson.”

Almost 40 years later since his departure from Foreigner following the Head Games album, McDonald performed again with the band as a special guest alongside former bandmates Mick Jones, Lou Gramm, Al Greenwood and Dennis Elliott. “I must admit I was a bit apprehensive about it before we actually did any shows,” he says. “But once once we got one or two under our belt as it were, just the very first show that we did, it felt really good. And I’m very pleased that we were able to do it. Unfortunately, Ed Gagliardi is no longer with us [he died in 2014], so it couldn’t literally be the original band. But Rick Wills has been involved in the reunion shows. They’ve been great.”

Reflecting now on being in another band after many years, McDonald says that maybe the third time’s the charm with Honey West. He’s enjoyed the experience, especially the recording of Bad Old World. “At the time I met Ted, I was definitely feeling I wanted to get my teeth stuck into something really significant,” he says. “I was very pleased to be able to do this. And once I was committed, that’s it. No matter what it takes, I’ve got to see it through. I always knew [the record] would get done. There was never a question about that. Once the whole thing was a go, then I’d take it all the way.”