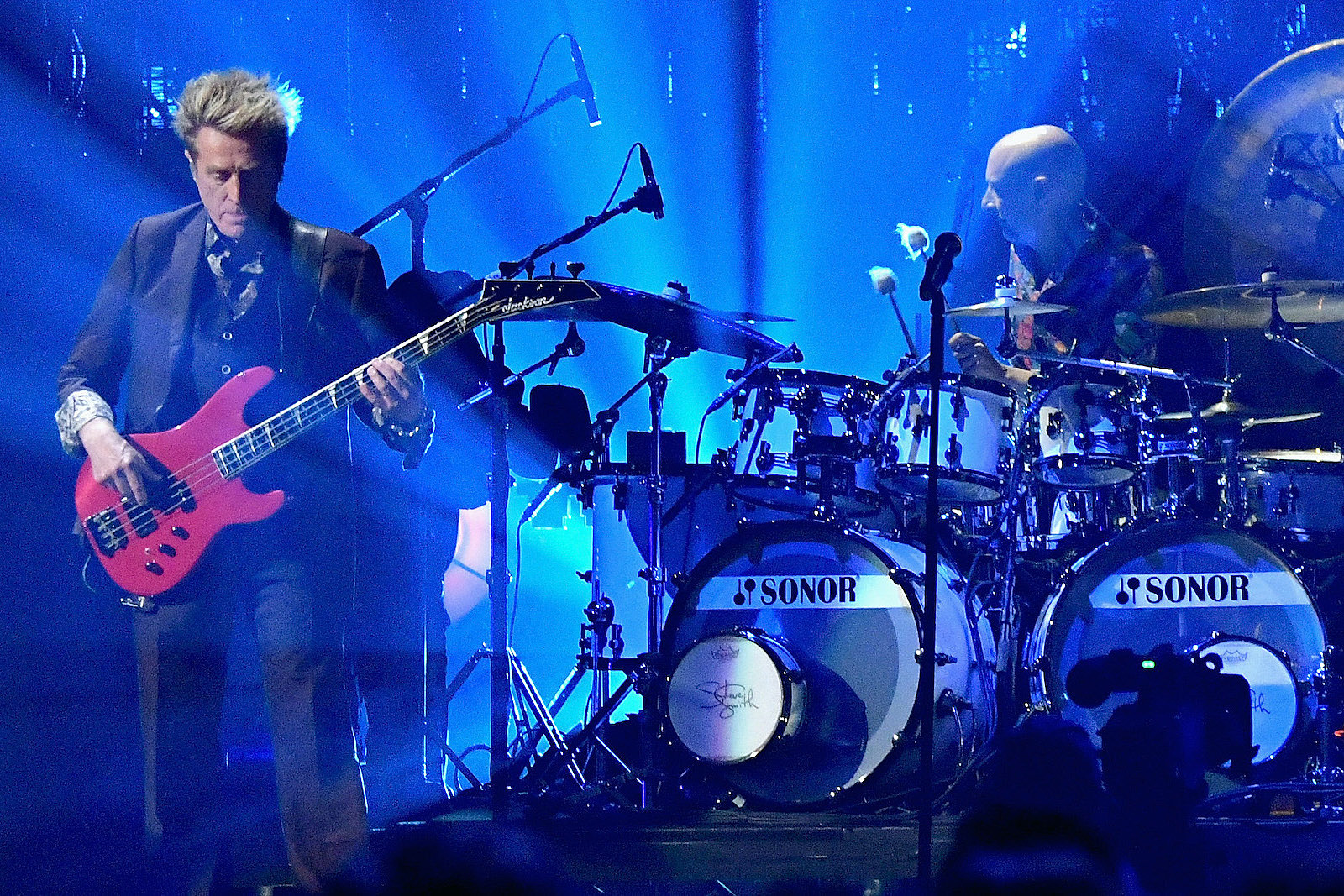 Getting fired may have felt a little like deja vu for Journey‘s Ross Valory and Steve Smith.

Guitarist Neal Schon and keyboardist Jonathan Cain let the band’s rhythm section go this week in what they said was a dispute over control of the band’s name. The split came almost exactly 35 years after Valory and Smith were fired the first time.

Journey initially assembled for the long-awaited follow-up to 1983’s Frontiers with the same lineup intact. But internal dynamics had changed: Singer Steve Perry arrived in commercial ascendancy, having just notched double-platinum success with his first solo album, Street Talk. He ended up producing 1986’s Raised on Radio, and that included casting the music – which Perry wanted to have a more R&B-inflected feel.

As the early sessions unfolded in the fall of 1985, Perry became increasingly unhappy with the results. Journey typically worked out songs in the studio, with everybody in one room, but this time Perry arrived with extensive demos recorded with Schon at Cain’s home studio. Drum-machine beats and bass parts were already sketched out, leaving Valory and Smith feeling isolated.

“My original strategy was to keep the band intact, not to change anything,” Perry told the Orlando Sun-Sentinel in 1986 after the album’s release. “We played everything with the original band, but we ended up after three months with only a couple of keeper tracks. It was scary because we all saw the group in a different light. The three of us wanted to do these songs, but the band couldn’t play them. So, we had to look and figure out where the weak link was. It turned out to be the rhythm section.”

Perry ended up firing Valory and Smith, breaking apart a lineup that had seen Journey rise to their chart zenith just a few years earlier with 1981’s Escape.

“At that point, the band was hugely successful and egos swell,” Valory said in Neil Daniels’ 2011 book, Don’t Stop Believin’: The Untold Story of Journey. “There were struggles for power and control of the band’s direction. In that setting, Steve Smith and I left. We’d had enough, and I think it was probably a good time to do so.”

Journey’s longtime manager Herbie Herbert vocally disagreed with the move, but said he was overruled by Perry. He ultimately decided to continue honoring the rhythm section’s agreed-upon salaries.

“Of course, that was completely ridiculous, and I forced him to pay them as if they were there on the tour and everything,” Herbert told Melodic Rock in 2008. “That’s what I think you do for your people. There’s very little chance that Ross Valory or Steve Smith would remember it, let alone reciprocate, but that is the honest-to-God truth. I made sure they were taken care of. I thought it was patently ridiculous, and thought that Steve Smith was one of the best drummers on the planet.”

Perry installed bassist Randy Jackson and drummer Larrie Londin for the bulk of the tracks. Jackson, though best known for his work with jazz-fusion great Jean-Luc Ponty, had earlier sat in on bass for “After the Fall,” from Frontiers. Londin was a former Motown sessions ace who’d also worked on Perry’s solo project.

“When I heard Larrie was there for two weeks tracking, it was a terrible time for me,” Smith said in Don’t Stop Believin’: The Untold Story of Journey. “I felt hurt, personally betrayed and really unappreciated. During the whole thing it was, ‘You’re not happening.’ I was constantly made to feel that I wasn’t a good musician, and that hit me where I live.”

Smith was ultimately reduced to a bit-player role in the project: He played on only “Positive Touch,” “The Eyes of a Woman” and “Why Can’t This Night Go on Forever.” Valory didn’t appear on Raised on Radio at all.

“To try to keep Steve [Perry] in the brotherhood, seeing that he was heading down a specific musical path, we felt we had to pursue the music he wanted to make,” Cain said in his 2018 autobiography, Don’t Stop Believin’: The Man, the Band and the Song That Inspired Generations. “I helped our band make the particular type of sound that Steve wanted – but the new songs came at the expense of our two brothers.”

Ross had made significant contributions to every previous Journey album, co-writing more than a half dozen songs – including the radio favorites “Anytime” and “Just the Same Way.” Smith joined in time for 1979’s Evolution, an album after Perry came on board.

The drummer was surprised how much had changed since then. “Steve just felt that what had been recorded didn’t live up to the demos,” Smith said in Don’t Stop Believin’: The Untold Story of Journey. “On one hand, I wasn’t completely surprised, because it wasn’t fun going to work every day. There was so much tension.”

Raised on Radio continued Journey’s multi-platinum streak, producing four Top 20 singles – including the No. 9 hit “Be Good to Yourself.” But a titanic shift had happened: Promotional photos from the era portrayed Journey as a trio now, with only Cain, Perry and Schon.

“It was not an easy decision,” Cain told the Sun-Sentinel. “These guys were a big part of the band’s sound, but it was time to move on. The three years we were off, they drifted away from where we were. The three of us had been writing the songs and we just said, ‘We’ve got to make this record now. It’s nothing personal; we’ve got to get down to business.’ They were hurt, but they were really nice about accepting the decision.”

Valory reemerged when Journey put their early-’80s era lineup back together for 1996’s Trial by Fire. Smith initially went back to fronting his own jazz group, Vital Information, before returning for stints in Journey from 1995-98 and 2015-20. Still, it took the drummer a while to recover from the initial shock.

“When it first happened, I stayed at home, didn’t do anything for a while, and just had to do a lot of thinking,” Smith told Billboard in 1986. “Even though I had a lot of experience playing with people outside the band, when it got right down to it, I had become really involved during the seven years I was with Journey. It was my life.”