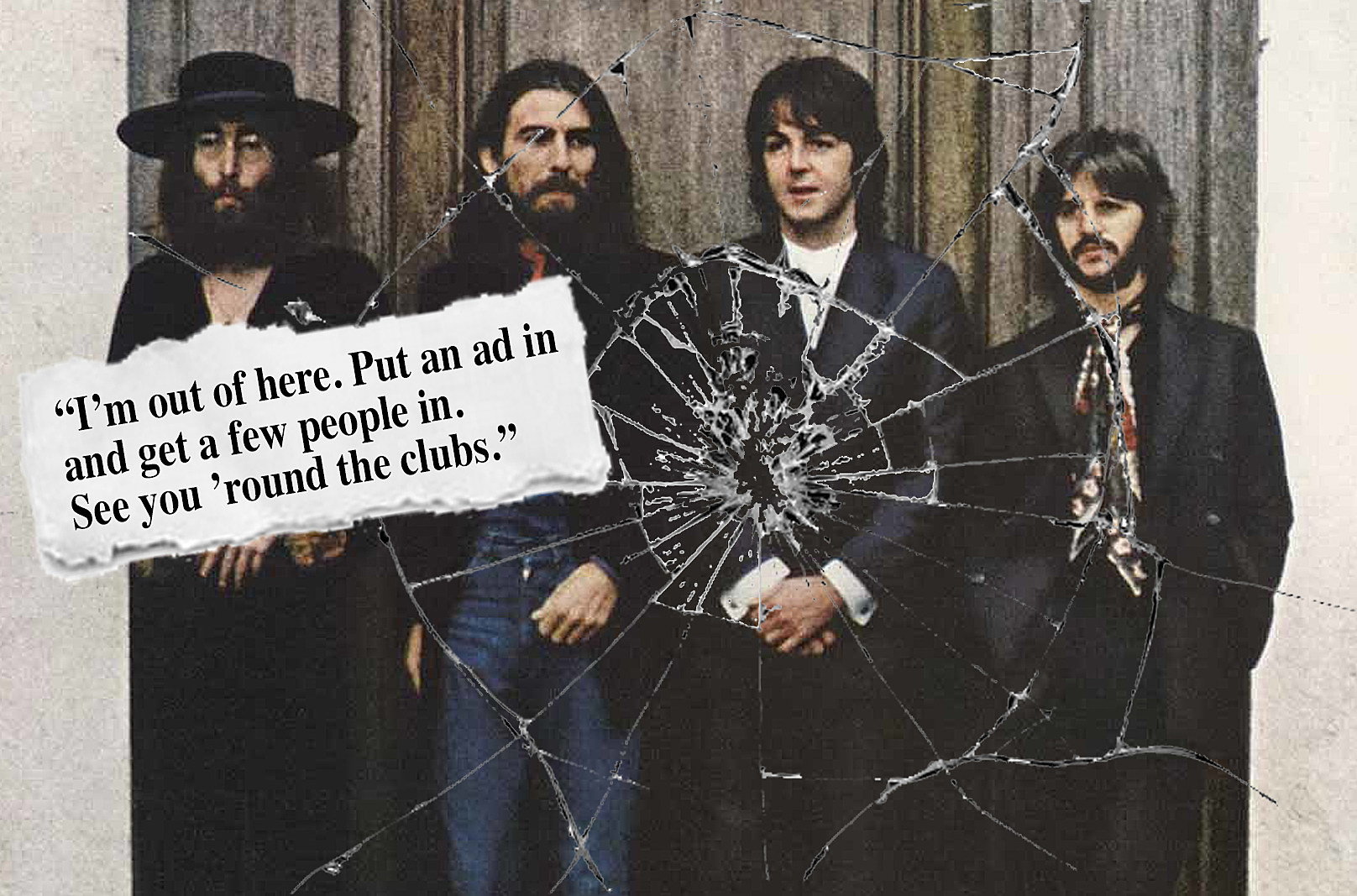 Officially, the breakup of the Beatles never happened.

None of the Fab Four ever said they’d never work together again. In reality, though, the breakup took place on April 10, 1970, the day after Paul McCartney released a statement saying he didn’t miss the band and had no plans to record with John Lennon, George Harrison and Ringo Starr.

The long and winding road to that point began several years earlier. The Beatles were originally Lennon’s band, but McCartney took an increasingly dominant role as time went on. Retrospectively, the scene is often depicted as a man standing up for something he loved while his bandmates failed to act the same way, for a variety of personal reasons (in Lennon’s case, it was supposedly self-doubt). But at the time, McCartney was cast as the villain. Even though it was actually Lennon who left the group first, McCartney was the only member to ever officially quit.

Along with artistic clashes, personal and financial intrigues spiraled out of control. With the death of manager Brian Epstein in 1967, an argument broke out over who should take over the office, as well as the band’s new Apple label. McCartney lost to the others, who wanted Allen Klein to be their new manager. They later regretted that decision.

Time has also reset the allegation that Yoko Ono split the Beatles. Her relationship with Lennon offered him more spiritual support than he’d ever felt before, breaking a bond he’d had with McCartney for years. But Ono always protested she didn’t want to get in the way of the Fab Four’s dynamic, and only did so because of her love for Lennon. McCartney said in 2012 that, as far as he was concerned, the band’s breakup had nothing to do with Ono.

There are many other ways to tell the story of the Beatles’ split, but the final twists can be summed up in 10 quotes over a 16-month period.

After performing “Hey Jude” on TV a few months earlier, the band decided it needed the infusion of energy from a live show and started rehearsing for a concert to take place in London at the end of January. They also decided to record in audio and on film for what would eventually become Let It Be. But sometime in the months between the TV appearance and rehearsals that started on the morning of Jan. 2, 1969, at Twickenham Studios in London, most of them seemed to have lost their enthusiasm. Instead of being seen as an attempt to encourage his friends toward an achievement they wanted and deserved, McCartney’s words were taken as another attempt at dictatorial behavior.

Harrison became the second member to temporarily quit after Starr did so during the recording of the White Album the previous year. As his creative talents found their force, Harrison struggled to tolerate the junior position he felt he had in the songwriting pecking order. To see Ono apparently having as much, or more, say as he did was too difficult to deal with. After an altercation with Lennon that’s said to have turned violent but was later hushed up, Harrison marched out of rehearsals – leaving his bandmates unsure whether he meant it.

Harrison and his three colleagues assembled at Starr’s home to talk things out, but Ono came as part of the package with Lennon. When she began to talk on his behalf, Harrison left again, leading Lennon to try to explain: “Yoko only wants to be accepted.” On being told by the drummer that she could never become part of the band, Lennon replied, “Yoko is part of me now. We’re John and Yoko, we’re together.” McCartney would later tell a newspaper, “John’s in love with Yoko, and he’s no longer in love with the other three of us.”

With the idea of the London show abandoned, and a few days of cooling off, all four Beatles gathered in the basement of their Apple headquarters to continue work on Let It Be (then known as Get Back). Harrison brought keyboardist Billy Preston with him; his influence was so positive that Lennon wanted to officially add him to the band – something he apparently accepted was not going to happen with his soon-to-be wife. McCartney’s dry response suggests a brewing war had entered his mind. Still, as it’s noted by many around the band, despite personal clashes, they continued to love the music they were making together.

The Beatles’ final live appearance nearly didn’t happen, but at the last moment all four, along with Preston, climbed onto the roof of Apple Records and played for 42 minutes in the cold British winter. Confidantes said the smiles shared among them were genuine;  one even asserted years later that it was “the most unique, fascinating thing they could have done … very raw, real and simple.” It’s said no one knew it would be their last performance. But perhaps some of them wondered if it might be.

Apple was running out of control, and only McCartney was taking a day-to-day interest in the business. It was originally launched as a tax-avoidance program, but the Beatles transformed it into a bona fide label seeking new talent. When an accountant quit over the financial mess in the company, McCartney felt he had to step in and tried to warn Lennon in particular that he was taking too much cash out of the business – leading to the angry exchange. Realizing the situation couldn’t continue, they agreed to bring in new management, but McCartney wanted Lee and John Eastman, the father and brother of his new wife Linda, while the others wanted Klein. On May 9, Lennon, Harrison and Starr signed with Klein; McCartney refused to add his signature.

With their last Abbey Road studio session having taken place two days earlier, and a successful performance in Canada with the Plastic Ono Band five days before that, Lennon appeared to have decided that it was time to act on a feeling he’d had for some time. (He later said he started thinking about the end of the band when the Beatles stopped playing live: “That’s when the seed was planted that I had to somehow get out … without being thrown out by the others. But I could never step out of the palace because it was too frightening.”) He delivered the news at a group meeting that also included Ono and Klein, right after McCartney tried, once again, to persuade his bandmates to consider playing live. Lennon was asked to keep his decision quiet, because business deals including a new record contract could be compromised. He agreed. Ono later told writer Philip Norman of the journey home from the meeting: “He turned to me and said, ‘That’s it with the Beatles. From now on, it’s just you – okay?’ I thought, ‘My God, those three guys were the ones entertaining him for so long. Now I have to be the one to take the load.’”

The months after Lennon’s announcement weren’t easy for McCartney. “We’re all talking about peace and love, but really we’re not feeling peaceful at all,” he told a newspaper at the time. At one point, Linda said later, he’d been reduced to a heavy-drinking figure who didn’t wash. He’d finally been cajoled into doing what he did best and started work on what would become his debut solo album. The next problem came when the rest of the Beatles objected to his planned release date of April 17 since it clashed with Apple’s other plans. But his reaction was so vehement that they backed down. McCartney finally called Lennon to say that he, too, was ready to quit – leading to the comment from his old friend.

Those words were included in a press release circulated with advance copies of McCartney, and, it’s been reported, added by McCartney himself. Despite the comment being far from a commitment to quit, it was very quickly seen as such. As the news reverberated round the world, one American journalist called it “a landmark in the decline of the British Empire.”

Harrison refused to comment. Starr said it was “all news” to him. And Lennon made a joke about the moment – though he later expressed regret that he had been beaten to the bigger punchline by his old songwriting partner. A statement released on behalf of the remaining three Beatles read in part, “They do not want to split up, but the present rift seems to be part of their growing up. … At the moment they seem to cramp each other’s styles. Paul has called a halt to the Beatles’ activities. They could be dormant for years.”

In another lighthearted comment – perhaps feeling a weight lifted off him – Lennon predicted the hiatus wouldn’t last: “It’ll probably be a rebirth, you know, for all of us.” Via a very long and winding road that included years of legal battles and personal acrimony, it indeed was.