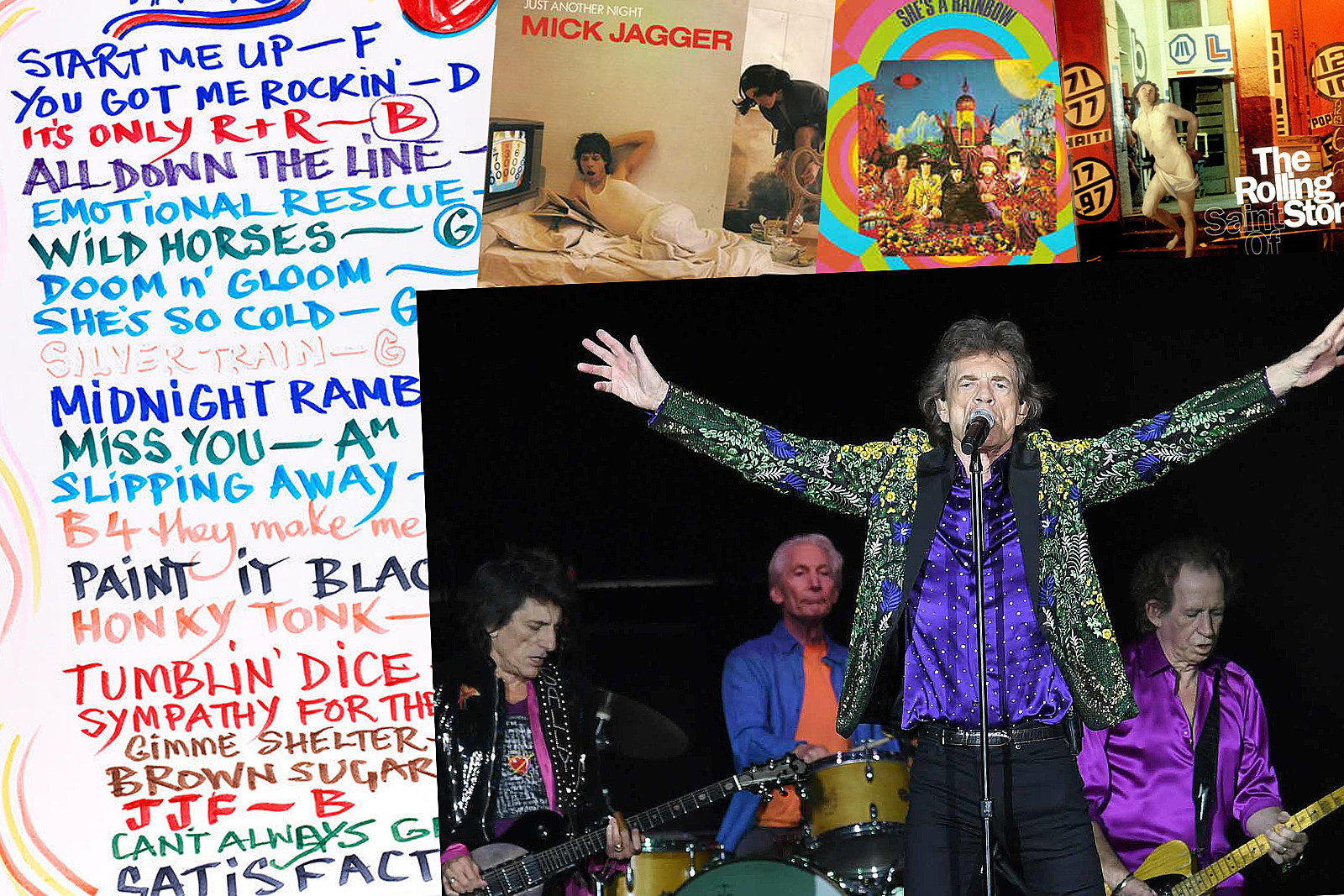 Choosing the perfect Rolling Stones set list can be both a fun and an extremely daunting challenge.

Exactly how do you represent the single most impressive active recording and touring career in rock history, one that’s nearing the 60-year mark, in just two hours? With 25 studio albums to their name, Mick Jagger and company could play nothing but A-list material for three straight nights without breaking a sweat.

But we love a challenge. And since the Stones, like every other band, aren’t going to be playing any concerts this summer, we asked four of our writers to come up with their dream 20-song Rolling Stones set list. We also asked them to list five songs that need to vanish from the stage for at least a little while, and to pick a solo song from both Jagger and Keith Richards worthy of the group’s time.

Nick DeRiso:
“Street Fighting Man”
“Brown Sugar”
“She’s a Rainbow”
“Tumbling Dice”
“Sympathy for the Devil”
“Saint of Me”
Two-Song Acoustic Set: “No Expectations,” “Almost Hear You Sigh”
“Rocks Off”
“Gimme Shelter”
“Love is Strong”
Two-Song Keith Set: “Happy,” “Infamy”
“Not Fade Away”
“Miss You”
“Terrifying”
“Get Off of My Cloud”
“Doo Doo Doo Doo Doo (Heartbreaker)”
Two-Song Encore: “(I Can’t Get No) Satisfaction,” “Start Me Up”

There are, of course, certain songs that must remain. At the same time, the Stones have done an admirable job lately of mixing in deeper legacy cuts like “Sweet Virginia,” “Dead Flowers,” “Midnight Rambler,” etc. Richards’ mini-set has been fairly static for a while too. So, freshening things up led me to more recent material. You’ve got to be very selective; there’s a reason why those older albums are so legendary. To me, though, these five post-Tattoo You songs are among the very best moments from the era.

Ryan Reed:
(no particular order)
“Street Fighting Man”
“She’s a Rainbow”
“You Can’t Always Get What You Want”
“Gimme Shelter”
“Can’t You Hear Me Knocking”
“Tumbling Dice”
“Miss You”
“Bitch”
“Ruby Tuesday”
“Get Off My Cloud”
“She’s So Cold”
“Beast of Burden”
“Start Me Up”
“Live With Me”
“Midnight Rambler”
“Jumpin’ Jack Flash”
“Sympathy for the Devil”
“She Smiled Sweetly”
“Under My Thumb”
“Wild Horses”

I tried to dig out some of my favorite deep-ish cuts, including “Bitch” and “She Smiled Sweetly.” There’s no way to avoid the hits, though. A Rolling Stones set list without “You Can’t Always Get What You Want” or “Start Me Up”? A travesty.

Matthew Wilkening:
(in no particular order)
“Dance (Pt. 1)”
“Sway”
“Can’t You Hear Me Knocking”
“Bitch”
“Heaven”
“Monkey Man”
“Torn and Frayed”
“Sweet Black Angel”
“I Just Want to See His Face”
“Undercover of the Night”
“Get Off of My Cloud”
“19th Nervous Breakdown”
“Under My Thumb”
“Ruby Tuesday”
“Emotional Rescue”
“Slave”
“One Hit (to the Body)”
“Terrifying”
“Can You Hear the Music?”
“Moonlight Mile”

The Stones have actually done a pretty admirable job of keeping their set lists at least somewhat fresh over the years. Of course, a big chunk of each night is dedicated to the biggest hits, but they’ve used the remaining time to highlight a rotating collection of gems fairly well. So this list isn’t meant as a critique of what they choose to play in front of football arenas full of fans, but instead as a daydream of what might be fun in a smaller setting. There’s some ’80s and ’90s material here – particularly “Dance (Pt. 1)” and “Terrifying” – that’s worthy of extra attention.

Corey Irwin:
“Start Me Up”
“(I Can’t Get No) Satisfaction”
“Get Off My Cloud”
“Ruby Tuesday”
“Jumpin Jack Flash”
“Angie”
“Honky Tonk Women”
“Paint It Black”
“Star Star”
“Under My Thumb”
“She’s A Rainbow”
“Sympathy for the Devil”
“She Smiled Sweetly”
“Can’t You Hear Me Knocking”
“Street Fighting Man”
“Sway”
“Brown Sugar”
“You Can’t Always Get What You Want”
“Salt of the Earth”
“Gimme Shelter”

My set list is heavy on the hits, which is exactly what I’d want from the Stones. It’s also a high-energy collection of songs, with only the occasional ballad to break up the pace. My thought process here is simple: If I’m shelling out $500 or more for these tickets, I want to be partying. Give me the biggest songs, get me dancing, clapping and singing along. If I leave the show tired, hoarse and happy, then it was worth the price of admission.

Which five Stones songs need to be dropped from the set list for a while?

DeRiso: “It’s Only Rock ‘n’ Roll (But I Like It),” “Jumpin’ Jack Flash,” “You Can’t Always Get What You Want,” “Paint It, Black” and “Honky Tonk Women.” Four of them just seem played out, and “Paint It,Black” simply will never match its studio glory with the long-gone Brian Jones.

Reed: “(I Can’t Get No) Satisfaction” — If you’re forcing me to cut some live staples, I’d have to start here. It’s the most overplayed Rolling Stones song — and I’d argue the most overrated. “Honky Tonk Women” — A lot of Rolling Stones hits scratch the same hard-rock itch, so I wouldn’t mind dropping this one for the sake of variety. “Paint It, Black” — It’s just not the same without the sitar. “You Got the Silver” — We have only 20 or so songs, so we need 20 or so Mick Jagger lead vocals. “Jumpin’ Jack Flash” — It’s an incredible song that would be most bands’ best. That’s why I included it on my personal set list. But for the sake of variety, it couldn’t hurt to drop another one of the anthemic rockers.

Wilkening: “Satisfaction,” “Start Me Up,” “Jumpin’ Jack Flash,” “It’s Only Rock ‘n Roll (But I Like It)” and “You Got Me Rocking.” The first three have had their edges and original meanings or impact sanded off by time and excess; they serve mostly as celebrations of the band’s status now. The last two have always gotten more credit and airtime than they deserve.

Irwin: “Time Is on My Side,” “Wild Horses,” “Beast of Burden,” “As Tears Go By” and “Tumbling Dice.” “Tumbling Dice” was probably the biggest omission from my set list. It’s a great song, but I don’t rate it as highly as others and wouldn’t feel cheated if it was left out. “Time Is on My Side” was another hit that didn’t make the cut. The band outgrew that song years ago, and it’s sleepy doo-wop structure wouldn’t have fit well with my other set-list choices. Under normal circumstances, “Wild Horses” would be the song I’d use as cover while I went to buy another beer. However, in this hypothetical dream set, there are no such filler tracks.

Which solo Mick Jagger and Keith Richards songs would make the best additions to a Rolling Stones set list?

DeRiso: For Jagger, “Don’t Tear Me Up,” easily the Stonesy-est of his solo singles. If he wanted to go more offbeat, I’d love to hear a stripped-down take on “Throwaway.” For Richards, it would be “Big Enough,” the funky opening cut from 1988’s Talk Is Cheap – though I have deep doubts as to whether anybody else could properly replicate the bone-deep groove set up by Bootsy Collins, Steve Jordan and Bernie Worrell.

Reed: Simply put, I would not. It’s not like either have a McCartney-like songbook to pick from.

Irwin: Mick Jagger – “Just Another Night.” Yes, the song is dripping with ‘80s cheese, but that’s what makes it such a guilty pleasure! Keith Richards – “Wicked as It Seems.” It’s a great groove, plain and simple. Plus, there are plenty of openings within the song for improvisation, allowing Richards to open things up in the live setting and launch into a couple of searing solos.

Wilkening: The sublime “Just Another Night” from Jagger. For Richards, it’s got to be something from Talk Is Cheap. “How I Wish” would probably translate the best to the Stones, but it would be fun to hear them take a shot at “Big Enough,” where Richards was originally joined by P-Funk legends Maceo Parker, Bernie Worrell and Bootsy Collins.