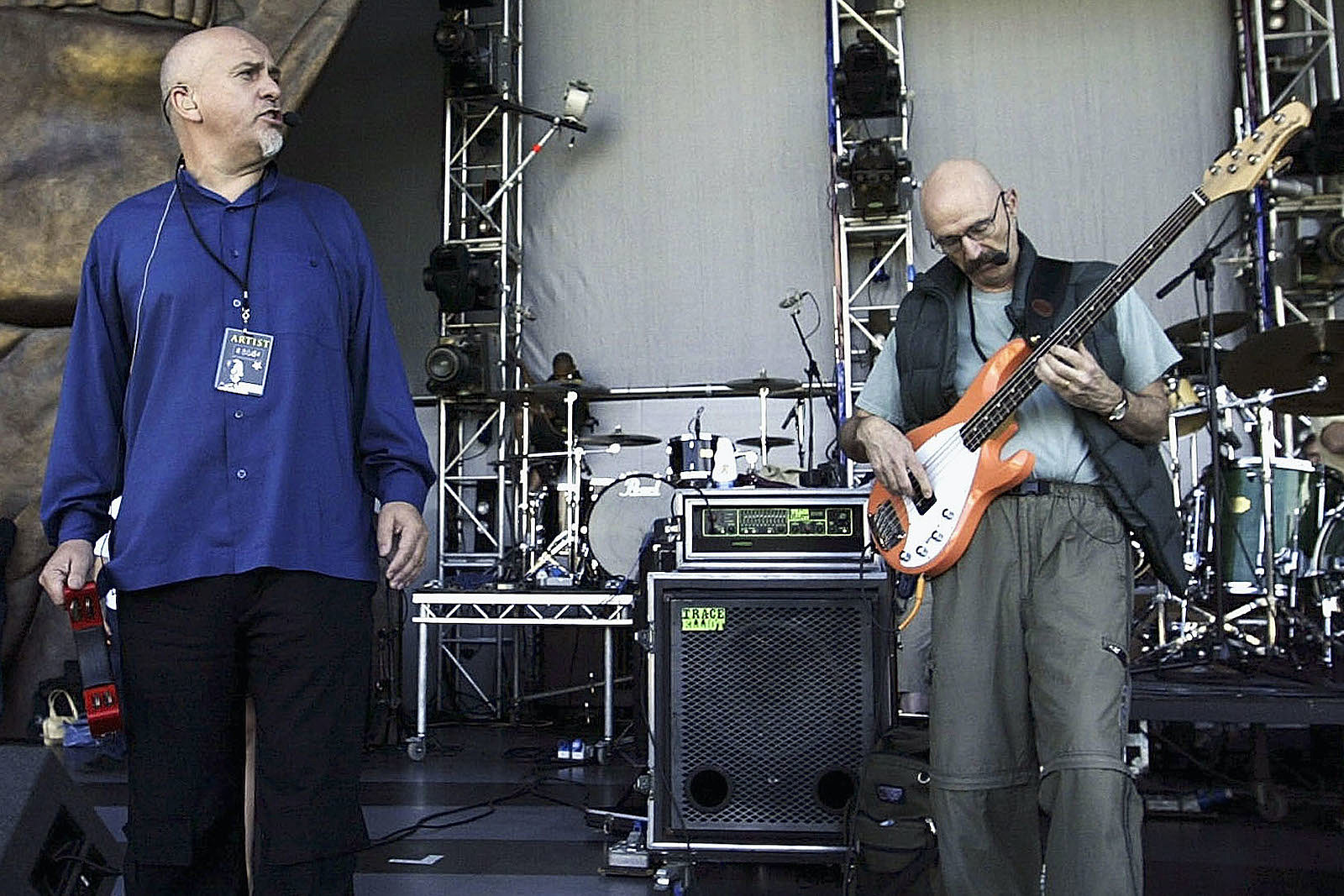 Their time together coincided with Levin’s growing mastery of the Chapman Stick, and the later development of his so-called “funk fingers” – both signature elements of Levin’s distinctive style. He was originally inspired to attach drum sticks to his hands in order to elicit a meatier sound after experimenting with them on “Big Time,” Gabriel’s second Top 10 single.

In all, Levin has appeared on nearly a dozen Gabriel albums, including live projects, and continues to tour with him. UCR discussed whether they have plans to follow up on Gabriel’s most recent original studio LP (2002’s Up), why Levin’s solo career often takes a backseat to these kind of collaborations and how he adjusted to remote recording even before the coronavirus quarantine.

You’re very prolific in doing sessions for other artists. We’re still adjusting to this new reality, but has anyone contacted you about doing some remote work?
I’m lucky that I always do that. I don’t advertise it, so I don’t really know how it works. Frankly, I know a lot of musicians, and occasionally I’m called to play on their albums, so I have a couple of those I’m working on now, which is normal for whenever I’m home. I’d love it, in a perfect world, if a ton of that poured in. [Laughs.] But there’s no reason why that should happen. Since the early ’00s, it’s been a wonderful way — I was reluctant at first to jump onto being a remote studio player, since I so much like being in the studio with other players and being influenced by what the drummer is playing live.

But it happened because I have the technology. I started doing it early, but I just wasn’t that excited about it. Gradually, I got into the differences in what I could do to compensate for not being there live in the studio, so I have indeed done many, many albums from my home studio. I set up with the basses I want to choose from and the sound I want to get and the right amplifier, so it’s good in ways. In a perfect world, I’d always be there with the musicians and the artist, so we can have a conversation face-to-face about the bass part. But I can’t complain. It’s been nice, and it’s opened the world of background bass playing up for me to be able to play with artists who can’t really afford to hire a studio and fly in musicians and get them all together at the same time. Budgets are, of course, a lot lower when you’re doing remote parts, and that works out well for someone like me who really wants to play good music, no matter who it’s with.

Thinking of other musicians who are usually on tour, it would be wonderful if they could get more remote work to do at home, and perhaps they’re talking about working at home. Ironically, a couple weeks ago, a band was here in my town of Kingston, N.Y., about to play a show, and I’m friends with some of them. And their show was canceled, and their tour was canceled. And as they were heading home, not knowing exactly what they would do, I encouraged them to each start on a solo album, even if they haven’t made one before – because now’s the time. In the long run, that’s a good thing to have in-pocket, even if you’re in a band and the band is busy.

Listen to Tony Levin’s ‘Not Just Another Pretty Bass’

People have to get creative. If you can have something else ready and stay productive …
I learned in the ’90s, when I was already a quite mature musician who’d played with a lot of bands but had never done a solo album, I started in a small way to do a solo album. What I learned is that the first one is kind of a hump to get over. It might be fun or not fun, but after you’ve released that, you realize that the whole world wasn’t waiting for your record, and you just really need to start on the second one right away. It becomes a comfortable way of making music. I always encourage musicians who want to talk about it with me to start on a series of solo albums, even if they’re busy doing other things, because in the long run it’s great to have that creative output.

It’s a way of challenging yourself too, whether you’re a bandleader or recording all the parts yourself.
Absolutely. For me, there are different categories of things I do. My favorite thing is to be in what I call “the band.” But I also do what I call “projects,” which I think a lot of musicians do. You put together a few guys who aren’t in a band together and do an album or maybe two albums. You write the music quickly. I’ve done a lot of collaborative projects, and they’re great and fun, but they usually take second place to a band, however. Liquid Tension Experiment, Bruford Levin Upper Extremities, Bozzio Levin Stevens, Levin Torn White — there have been so many, I’d have to make a list to remember them all. [Laughs.] But when you go to play live, which to me is the most important part of making music, you’re subject to the problem that each guy is in a band or two bands, and his priority is to those. So, those collaborative albums I’ve done, no matter how good they are, will eventually take second place to “the band” — in my case, Peter Gabriel and King Crimson and Stick Men and Levin Brothers, the jazz band I’m committed to. It’s interesting that there are those categories, which doesn’t leave much time for a solo career, but that doesn’t keep me from writing music. If things get slow on other fronts, that’ll get put on top of the list and be a priority. I’m very happy and lucky that the bands I’m in are keeping me too busy to have a solo career. I say that with a sense of humor.

Peter Gabriel hasn’t released a new studio album in almost two decades. When’s the last time you recorded with him?
Maybe only a year since I happened to be in London and he asked me to come in and play on one track. But I have no news about what’s coming news-wise or album-wise. Like any fan, I look forward to what he’ll next do, but I don’t know.

My wife told me to tell you how much she loves your dancing onstage with Peter.
[Laughs.] That’s one of my favorite things about working with Peter. It’s challenging, it’s funny, it’s silly. And the fact that we, who are making progressive music in that band, are willing to make fools of ourselves to some small degree onstage — it’s a wonderful thing and keeps us young.