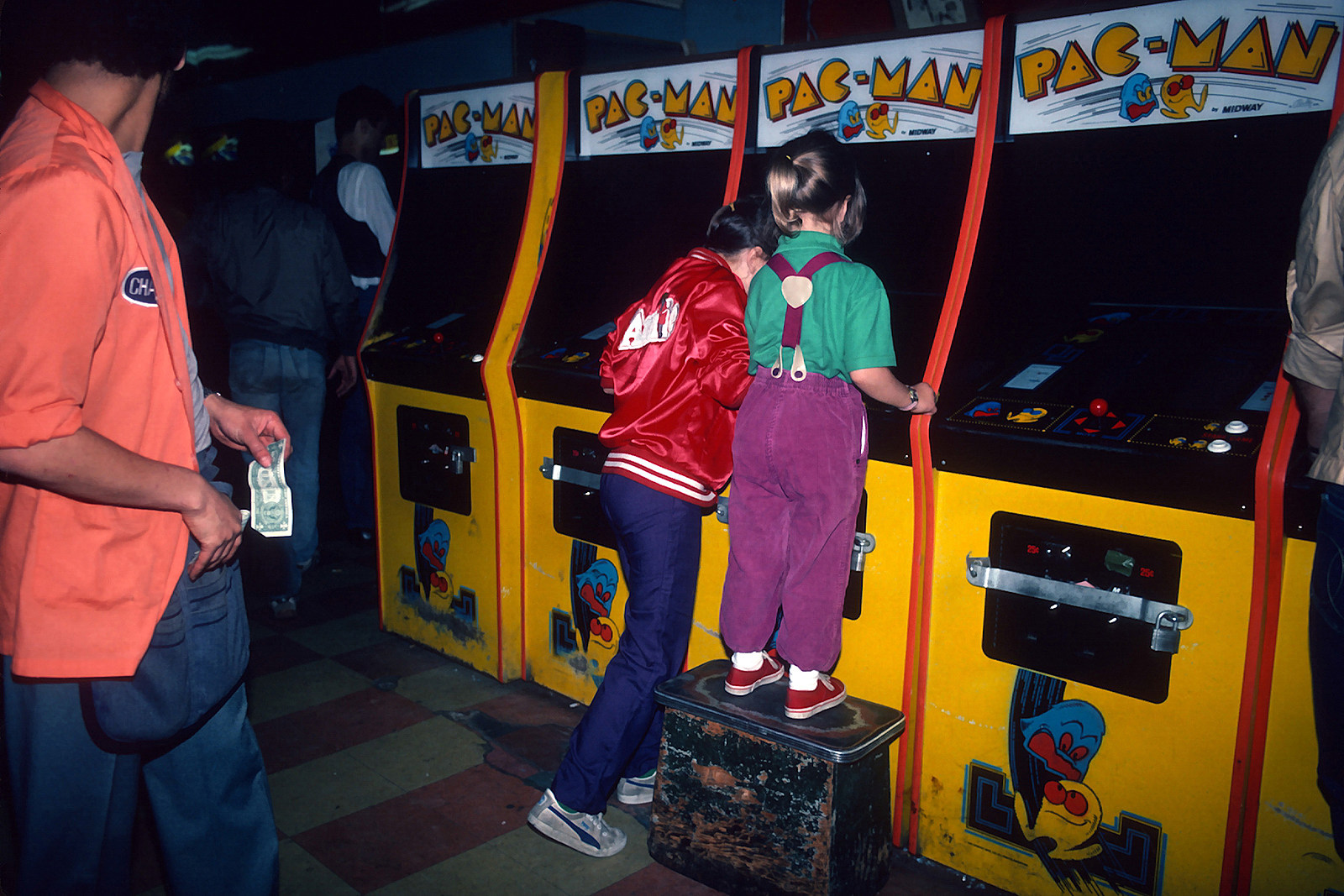 It all started with a slice of pizza.

In 1979, video-game developer Toru Iwatani was searching for an idea. Up until that point, most of the popular games had violent themes, geared toward a predominantly male audience.

“The image of the game arcade was that it was a dark and scary place, and it’s a place for only guys,” Iwatani explained in a 2010 interview. “However, we knew that there would be no future in arcades unless girls and couples would come in as well.”

With these thoughts running through his head, Iwatani decided to grab a bite to eat. When he removed a slice of pizza from the pie in front of him, inspiration struck.

“If you take a look at a pizza, it’s round,” the designer explained at a 2015 gaming panel. “Take a slice out and you have Pac-Man.”

Beyond the character’s design, Iwatani determined that a game connected to food would click with the female demographic he was chasing. “When you think about things women like, you think about fashion or fortune-telling or food or dating boyfriends,” the designer opined to Wired. “So I decided to theme the game around ‘eating’ – after eating dinner, women like to have dessert.”

Even the name was food-centric. In Japanese cartoons, the words “Paku Paku” are often used to describe eating sounds, the same way “chomp” is used in English. “Puck-Man” was born.

Iwatani began designing elements of game play, pulling extensively from his favorite childhood characters. “The game idea – eating a power cookie and powering up to defeat the ghosts – was inspired by Popeye eating spinach and defeating Bluto, turning the tables on him,” he explained, adding that “the ghosts were inspired by Casper.”

Iwatani was also determined to make all the characters likable. Pac-Man’s distinctive yellow tone was chosen because it was a “peaceful color” that “neither represents friend or foe.” The game’s enemies – ghosts named Blinky, Pinky, Inky and Clyde – were made cute and colorful so “they would be harder to hate.”

“There’s an enemy, but you can’t hate the enemy,” Iwatani said of the ghosts, comparing Pac-Man to the cartoon Tom and Jerry, where even the antagonists are lovable.

Even in those early days, Iwatani had visions of merchandising Pac-Man. He sewed homemade stuffed animals and iron-on T-shirt designs with the character’s likeness, even though video games had never ventured into such territory. His ideas would prove prescient.

On May 22, 1980, Puck-Man made its public debut. It wasn’t a wide release, but rather a test location where designers could observe people’s genuine response to the game.

“It was a thin, chimney-shaped building with seven or eight floors, consisting of several movie theaters,” Iwatani recalled of that first location. “On the top floor, there was a very long, narrow room where the couples, having just seen movies, would go up to have a little enjoyment before they returned home. So they weren’t necessarily gamers.”

People quickly gravitated toward the game, with Iwatani noting that women and couples “were excited” about the machine. “They played it, and they were more or less satisfied – they figured out how to play it,” he recalled. “It’s not a difficult game. On the other hand, the core gamers, the men, were not necessarily very excited about it. But it was for people who didn’t play games on a daily basis – women, children, the elderly.”

While these initial players enjoyed their experience, their reaction was relatively reserved. “It’s not like people sat around and played the machine all day,” Iwatani admitted. “So, we didn’t think it would be a major hit. I didn’t think that the U.S. and Europe would take it up, because it’s a rather slow, relaxing game. At that time, what was popular overseas were more thrilling games, and I felt that perhaps the rhythm of Pac-Man wasn’t matching the needs of overseas users.”

That July, Puck-Man made its broader release in Japan. It would be released in the U.S. in October, but the name would be altered. “If a part of the ‘P’ is chipped off a little bit, it will be an ‘F,’” Iwatani explained. To save the game from potential vandalism, the title was changed. “’PAC’ was suggested as an alternative while discussing this issue with the Americans. So the name then became ‘Pac-Man.’ The game was subsequently re-imported to Japan, and so even in Japan the title is written as ‘Pac-Man.’”

The arcade game quickly became a worldwide phenomenon. In one year, more than 100,000 units were sold in the U.S., an unheard of number at the time. Pac-Man spawned massive merchandising, with the popular yellow character adorning T-shirts, lunchboxes, plush toys and more. Spin-offs soon followed, including the highly successful Ms. Pac-Man in 1981. That same year, singing duo Buckner & Garcia scored a hit with their novelty song “Pac-Man Fever.” The track peaked at No. 9 on the Billboard Hot 100 chart.

Throughout the decade, Pac-Man was everywhere. An official board game was released by Milton Bradley, while sport-card manufacturer Fleer released a line of Pac-Man trading cards. An animated TV show from Hanna-Barbera even ran on ABC from 1982-83.

Watch a Clip From the ‘Pac-Man’ Animated Series

Even as video games have continued to evolve, Pac-Man has remained one of the most popular games on Earth. Guinness World Records recognized it as the “Most Successful Coin-Operated Game” in history, while also confirming that Pac-Man has the record for most coin-operated arcade machines worldwide.

It’s estimated that the game has generated more than $14 billion in revenue over its first four decades. Images of Pac-Man even appeared in promotional videos for the 2020 Olympics in Tokyo.

Watch a Promo for the Tokyo Olympics Featuring Pac-Man

On his creation’s lasting legacy, Iwatani remains pragmatic. “My opinion is that Pac-Man became popular with everyone, from youngsters to elders to men and women because of our original idea to make a game that spoke to both female customers and couples,” he told Time in 2015.

“It might be a bit of a stretch to use a Beatles comparison, but if the song ‘Yesterday’ is looked at as the standard musical number for music, then I think Pac-Man is the standard for games,” he noted. “Thus, Pac-Man will be loved forever, and I’m proud of that.”