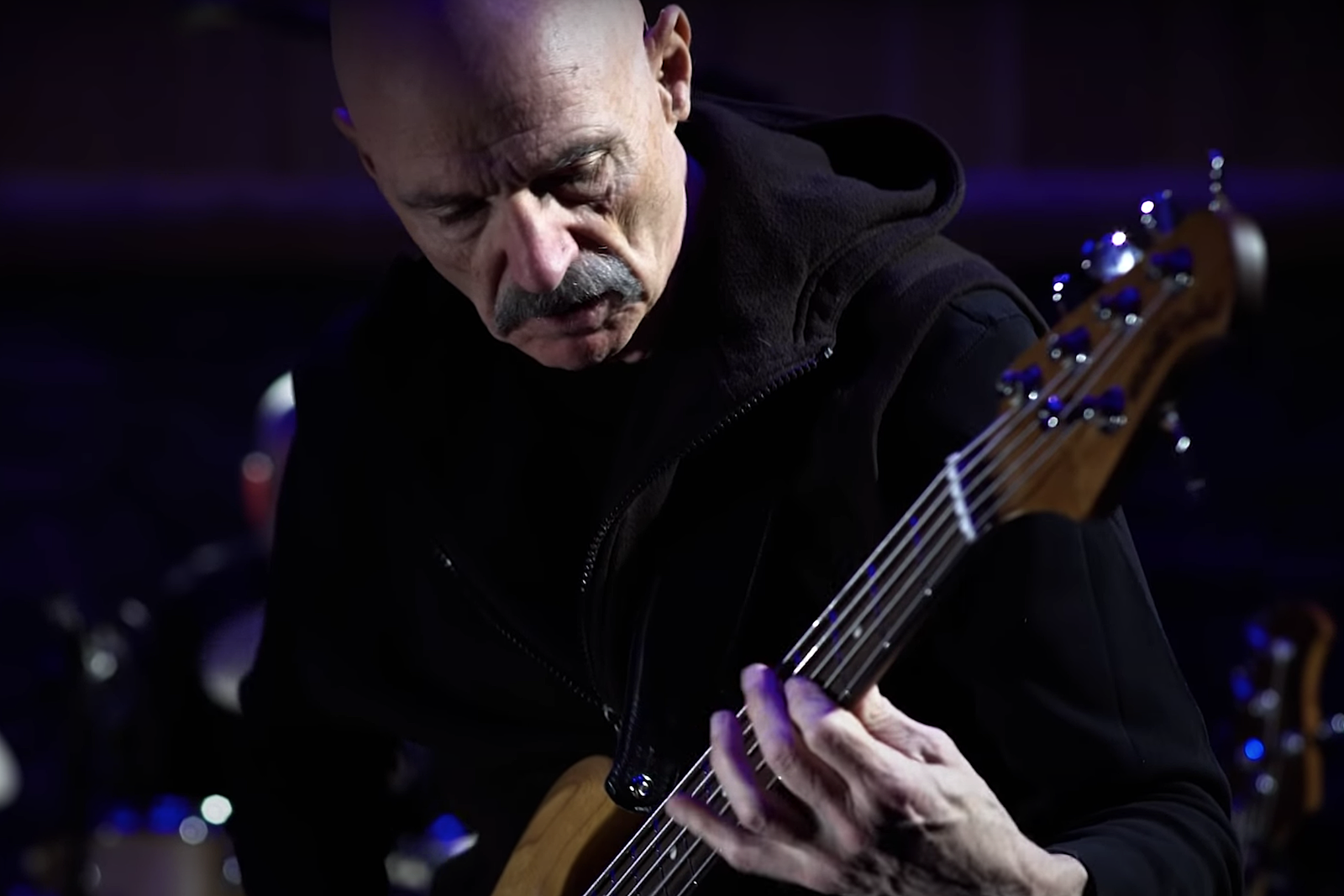 King Crimson‘s 2020 North American tour dates with the Zappa Band have been postponed “for a year” amid the coronavirus shutdown. That’s left bassist Tony Levin to cool his heels.

Still, he says the band won’t take long to get back to its fighting weight – and, if history is any guide, they’ll emerge transformed.

“We need to know if there’s a tour, what the dates are,” Levin says, matter of factly, in an exclusive UCR interview. “The next issue is we need [King Crimson leader] Robert Fripp to decide what music we’re gonna do, so we can get practicing and get up to speed before we get together to rehearse it.”

Decades later, Levin says Fripp’s vision for the group is still evolving. He joined us to discuss how King Crimson reworks its classic material onstage, learning to live with the “prog-rock” label, and how he’s come to embrace the band’s towering legacy.

You’ve said that the new Crimson material played onstage in the last few years was either devised by Robert and singer-guitarist Jakko Jakszyk or by the drummers, and then presented to the band. In the case of the full-band songs, were those sort of arranged with everyone in the room, or did Robert and Jakko have a pretty clear vision for that material already?

That’s a good question! That harkens back a couple years, so I’m going to think about it a minute. It’s usually Jakko that I hear from, and he says he has an idea for a song or something he’s worked out with Robert. Maybe [drummer] Gavin [Harrison]’s played on it. He’d send it to me to redo the bass part as I felt it should be. In a similar way, they’d hand it to Gavin and ask him to do an arrangement for the three drummers. That might not be the only way we did it, but that’s what comes to mind when you ask about that. It’s been a few years since we’ve done that kind of writing.

I’ll add that when Robert first asked the drummers to do some pieces, the intention was that we would gradually fly along, the rest of us. The intention, as least as I understood it, is that they’d become band pieces. That just didn’t happen. That’s not a problem. It’s hard to say why things don’t happen. We ended up maybe tinkering with that, but maybe the thing was that they sounded so good with just the drummers — there’s so much going on, and they’re so interesting. But there was that thought at one point: having that be a new way of coming up with material.

Robert has also talked a lot recently about being kind of boxed in by the prog label, even calling it a “prison” in one interview. You seem much less concerned about that: You’ve been a regular on Cruise to the Edge and, of course, you named the 2016 Stick Men album Prog Noir. I understand Robert’s frustration, but what are your thoughts?

It’s a complex situation. I’m aware a little bit of Robert’s feelings about it, and I don’t feel the same as him about it, and that’s completely fine. With any label of a genre, there’s always some confusion when people aren’t exactly thinking of the same thing, even when they say it — unless it’s just pop or rock. So, certainly with progressive rock, there’s some overlap of what people mean when they refer to that. Let’s also add in that musicians, myself included, don’t like being pigeonholed when we write music. We’re not thinking, “Let’s write something progressive” or “Let’s write some prog rock.” I think “progressive music” or “progressive rock” is a very good description of most of the music I’m involved in nowadays.

There’s confusion when you use the term “prog rock.” I can’t define it, but let me put it this way: There are a lot of bands who are doing the kind of music that Yes and King Crimson and Genesis were doing in the ’70s. Calling that prog rock, playing in that style — which is a fine thing to do — means a very different thing than to actually be a progressive band who’s trying to break out of that style or break out for the 10th time from that style, like King Crimson is trying to do. I won’t say how successful we are, but we’re trying to not do what we’ve done before. There’s that confusion in the two meanings of “prog rock” and “progressive rock.” It’s a very complicated subject and a very good question for you to ask. For me, I’m very comfortable referring to my music as progressive rock, and I don’t usually refer to it as “prog rock,” except for that one album and that song. [Laughs.] All these rules are meant to be broken. “Prog Noir” just seemed to fit not only lyrically but also the mood of the way we were making music on that album.

You can see why Robert’s sense of it is different, with so many bands and fans wanting the music that’s like the early bands I talked about. Robert has devoted his whole career not only to not doing what Yes did but not doing what King Crimson did on the last album. I know in ’81, when I joined the band, Robert refused to play any previous material. We tried to find a new language, a new way of playing our music. And then a few years later, we found ourselves not trying to play like the Discipline era, even though it was very good music and our fans expected us to do it. I won’t say how successful we were at that, being the same musicians, but we tried to break out of our own mold. Robert’s been wonderful at constantly doing that, so you can see how he might bridle a bit at being accused of trying to play like he played in 1969.

Obviously that ’80s lineup was so distinctly different in sound and vision that it made sense, but for you, also being a fan of King Crimson, what did you think of that choice? Did you agree it was the right thing to do, or did you find it at all frustrating?

I wasn’t involved in the overall sense of where the band was going. Frankly, I’m still not. In my sense, that always resides in Robert’s psyche, in Robert’s sense of what King Crimson is. One of the things he’s brilliant at is getting the right musicians to implement that vision. I think that’s what he did in the ’80s, and that’s exactly what he did with this lineup: not to explain to anybody what to do but to get the right players and set them loose to interacting and, therefore, to fine-tune to reach the vision of what King Crimson should be. We weren’t thinking of ourselves as King Crimson at all — in fact, when we first formed the band, we called it Discipline, and we did a tour with new music. Yes, the audience wanted classic Crimson material, and we didn’t do it, and they weren’t happy about it.

Now that we’re embracing a lot of the music from the old catalog, I’m finding it a challenge — like everything with King Crimson. The wonderful bass parts that were created by John Wetton and others before I was even in the band are inspiring. As the bass player who’s playing that onstage, my challenge is to determine what’s crucial, what makes that part so special; however, I also to make the part my own with the sound and the notes or both, or the approach. I also need to work it in with three drummers, which is different from the original. It’s not the simple matter for me of just playing a cover of the notes the way they were. That would be easy, but it wouldn’t be satisfying to me as a player. I think the fans would be fine with that, but it’s just not the way I am.

It’s a challenge that keeps evolving. Pieces like “Red” or “Larks Tongues in Aspic,” I’ve played many, many times, and I’m still looking for the best way to play it. In the past year and a half, we’ve added some of the music from the Discipline era, which is funny because it goes way back and is kinda classic stuff, but it happens to be my parts. As I started to play them, I remembered that playing them live was a process. I was not playing the parts from the album anymore; I was really refining them and finding the best way to play my own parts. Nowadays, I have the same approach to a classic John Wetton part as I do to a classic Tony Levin part.

It’s really a luxury to maintain a core audience throughout this long stylistic evolution.

I think a band generally gets the audience it deserves, and we have a great following of people. When you think of the audience of a band like King Crimson or Stick Men, they’re pretty sophisticated musically but usually ready for challenges. The band is challenging itself, but it also needs an audience who can accept being challenged and not staying on the easy road and only playing the quote-unquote hits. Built into it is a high degree of being particular about what the band plays. The King Crimson audience will include many who are expecting or demanding a certain thing, and some of them won’t get it and will be unhappy. That’s been part of the band since I joined it. People were [saying] they were very unhappy about this new singer named Adrian Belew in 1981, just as they might be unhappy now about anything new in the band. That’s fine. We have a vigorous interplay of ideas with King Crimson fans, and we can feel proud that we inspired some of this passion about what music King Crimson will play. I embrace it all, and I’m always grateful to the fans for supporting this entity of King Crimson. The way we have to rehearse with international players and so many people in the band, it wouldn’t support itself if we didn’t have a lot of fans to support us.

Speaking of radical reinventions: One of the most divisive tunes from the recent set is the updated version of “Indiscipline,” featuring Jakko’s melodic singing instead of Adrian Belew’s spoken word.

Kudos to Jakko. He was given a very difficult task when Robert said, “Let’s do that again.” Jakko knew he didn’t want to and wasn’t expected to do exactly the same [thing]. He’s not a good imitator of Adrian, and nor does he want to be. He chose his own way, a very interesting way, of re-examining that piece. In Crimson, when we bring up any older piece, we’re expected to reexamine it, not to just play it the way it was. I personally enjoy playing it that way. I understand some fans won’t like it all. That’s the wonder of our King Crimson fanbase.