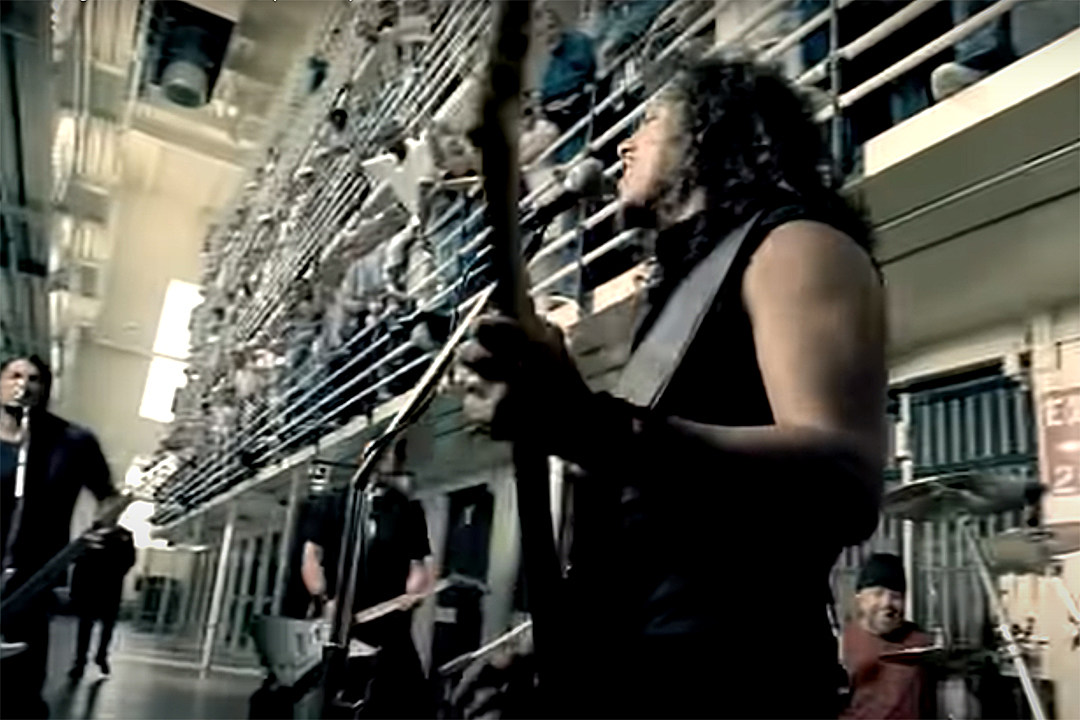 ]Kirk Hammett recalled Metallica’s trip to San Quentin State Prison in 2003 to record the video for the title track to St. Anger.

The promo was nominated for an MTV Video Award, although it didn’t win, while the song won a Grammy for Best Metal Performance. It was the first piece of film to feature newly-joined bassist Robert Trujillo, and also featured many prison inmates.

“Well, there was a lot of tension in the air, for sure,” guitarist Hammett told Kerrang in a recent interview. “There were some women who came with us and they had to be restricted to a certain area because it was just too dangerous for them to even be seen. At one point, one of the inmates screamed over to me and said, ‘Hey, Kirk, I know your mom!’ and I was like, ‘Excuse me?’ He goes, ‘Yeah, I used to mow her lawn!’ He added that he knew so-and-so from the neighbourhood, too. I was like, ‘I might know more people here than I thought!’”

He said that the experience turned out to be “cool” and “really mellow,” continuing: “All the inmates were really appreciative of the fact that we were there and it was a distraction for them. I got a really cool thing from one of the correctional officers. It was a magazine with us on the cover and the subscription tag said ‘Richard Ramirez’ – the ‘Night Stalker’ killer, who was at San Quentin while we were playing. He was a Metallica fan, but he was on death row and he could only hear us. I still have the magazine. It’s a nice little novelty item.”

Asked which music video made him most proud, drummer Lars Ulrich replied: “I would say the video for ‘I Disappear’ [in 2000], which we filmed at Monument Valley in Utah, on top of one of those pillars or whatever you call them. That was crazy. There was a lot of excitement about that video and it was a different thing for us, because it was tied to a movie, Mission: Impossible 2.” He also namechecked the promos for “Turn the Page,” “Whiskey in the Jar,” “The Unforgiven I” and “The Unforgiven II,” but went on: “I think that the one for ‘I Disappear’ was a lot of fun to do.”

The fan question session also included a query about who might play the band in a future biopic. “Well, we used to joke that James Spader was going to play me,” Ulrich replied. “Then we used to say that the Cowardly Lion from The Wizard Of Oz was going to play James and I think Carlos Santana was going to play Kirk. That super bad-ass guy, Danny Trejo, would play Robert. Let’s see how it plays out!”