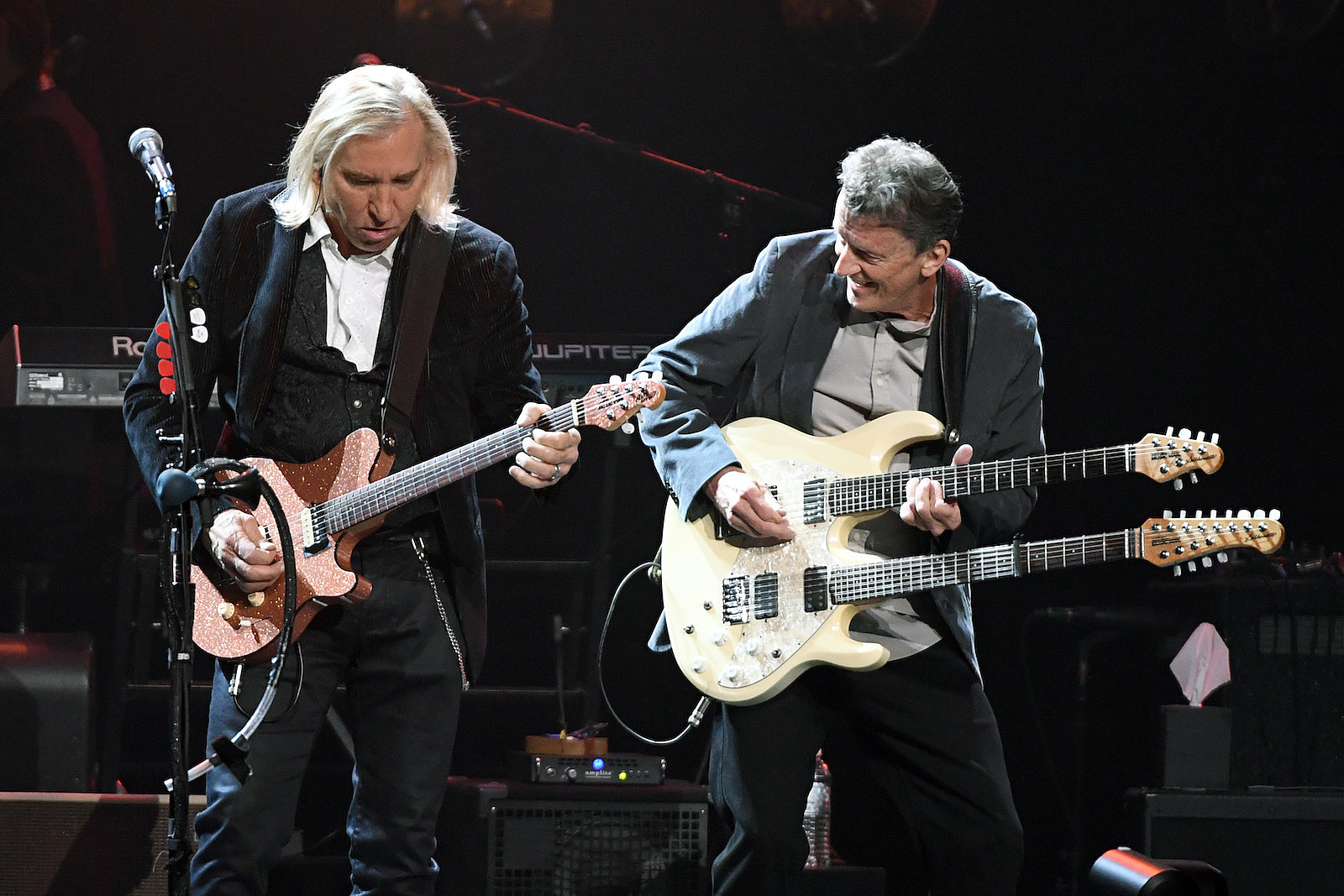 Steuart Smith has been a key contributor with the Eagles since replacing Don Felder. Yet he remains a shadowy figure, shying away from the spotlight while never officially joining the group.

“I’m not an Eagle,” Smith famously said in the History of the Eagles documentary. That film was released in 2013, and he’s still not. When Smith isn’t onstage with the band or co-writing its music – he’s credited on five songs and shared producing duties for 2007’s Long Road Out of Eden, the Eagles’ most recent studio effort – the self-effacing guitarist can be found elsewhere.

Those were, in fact, the terms of the deal Smith made when Don Henley discovered him decades ago during a sideman gig with Shawn Colvin at the Ford Theatre in Hollywood.

“He goes off and does side projects,” Henley said during a Runaway Tours Q&A in 2017. “He’s worked with Rodney Crowell a lot. He does still play with Shawn Colvin once in a while. Steuart’s one of those guys that … cannot stop working and sit still for five seconds. If we’re not playing, if we’re not doing Eagles stuff, or if I’m not doing solo stuff, he’s off doing some other project. He never ever stops. We say, ‘Steuart, why don’t you take a vacation, just a couple of days?’ But he just loves to play and he’s really good at it.”

Over the years, Smith has come to mean just as much to his other main collaborators. “It seems like whenever Steuart and I get together,” Crowell told the Charleston Gazette-Mail while discussing their work together on 2014’s Tarpaper Sky, “we come up something good for me.”

Smith initially appeared on Henley’s 2000 solo album, Inside Job, before joining the Eagles touring group in 2001. He’s been a part of Henley’s live lineups and played a key role in sessions for 2015’s Cass County. In time, Henley became increasingly protective of Smith, memorably tossing out an unruly fan who kept calling for Don Felder during an Eagles show.

“Steuart’s quite a musician, and he’s added a lot of much-needed creative spark to the band,” Henley told The Washington Post in 2003. “He’s incredible, one of the best I’ve ever seen and one of the few people who could have stepped into this position and handled it as gracefully as he has. The thing that is most gratifying to me is that the crowds seem to love him: They applaud him vigorously every night and when he’s introduced, they chant his name.”

Still, Smith wasn’t included in the promotional material when Eagles reconfigured things in the wake of Glenn Frey‘s death. He doesn’t sit for individual interviews. His fan page has less than than 1,000 likes. Instead, Smith remains part of largely unknown group of Eagles backing musicians that includes drummer Scott Crago and keyboardists John Carey, Will Hollis and Michael Thompson.

Apparently, he wouldn’t have it any other way. Smith remains doggedly anonymous, despite fans who call for him to be added to the lineup. He apparently just wants to do the work, free of the fame that usually attaches: When Henley had Colvin play opening gigs while touring the Americana-focused Cass County, Smith pulled double duty by appearing with both acts.

Henley said he knew from the start that the versatile Smith would be a great fit for Eagles, at a critical moment when they needed someone to step into a pair of disparate roles once filled by the rootsy Bernie Leadon and the rock-oriented Felder. Still, it took some convincing.

“I’m a big Shawn Colvin fan,” Henley said during the 2017 Q&A, “but my eyes were riveted on this guy named Steuart Smith. And I went, ‘Jesus, this guy is great, incredible.’ So, I got in touch with him, and I said, ‘You know, I’m in this little group called the Eagles, and we’re really looking for a guitar player who can play in this style that you play in. And there really aren’t very many of them in the United States or in the world.’ And he went, ‘Well, I kind of like playing with Shawn. I like her music, and it’s a good gig for me.’ And I said, ‘Listen, I’m talking about some serious employment here.'”

Henley encouraged Smith to meet Frey, after telling the late band co-founder that Smith “can play anything.” They ran through a few songs at Frey’s West Los Angeles studio, “and Steuart’s kind of nervous and he’s sitting there and he’s playing, and Glenn’s just sitting there listening to him,” Henley recalled. “We finish, I say, ‘Glenn and I have to talk about this now,’ and Steuart leaves the room. And I looked at Glenn and I said, ‘What do you think?’ And he went, ‘Bingo.’ He said, ‘That’s the guy.’ And so he’s been with us ever since.”

More than that, Henley said Smith’s presence steadied things when Eagles were suddenly pared down to a foursome. “If we hadn’t found him, I’m not sure if we could have continued, frankly,” Henley admitted. “Because there are not many guys around that can do what he does.”

The Complicated History of Eagles’ ‘Victim of Love’