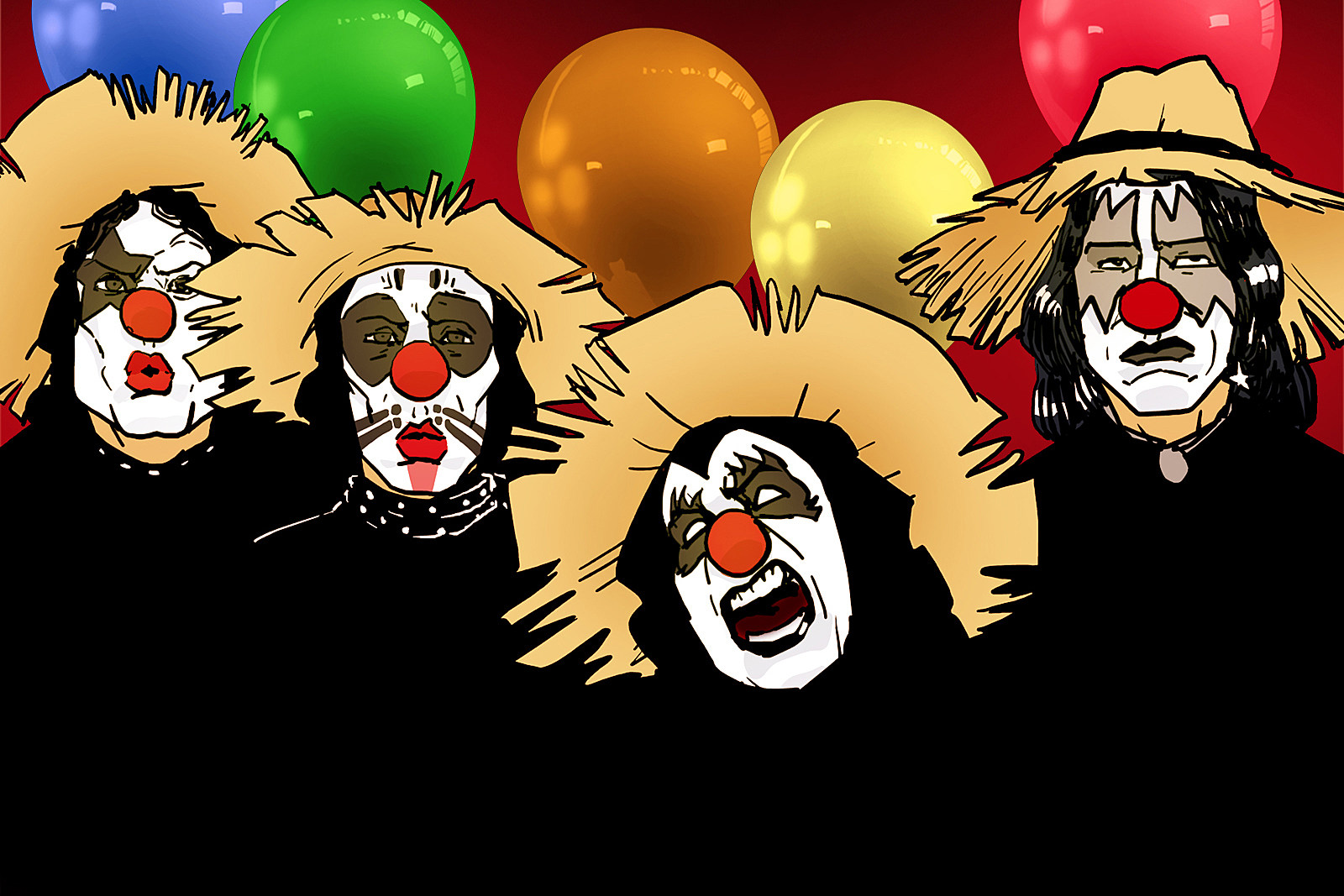 If they hadn’t pushed back against a sorely misinformed photographer, Kiss say their first album cover would have become a literal clown show.

After failing to hit it big together as the more experimental Wicked Lester in the early ’70s, Paul Stanley and Gene Simmons recruited Ace Frehley and Peter Criss to form a new band with a tougher, stripped-down sound and a unique look. Each member of Kiss would use face paint to assume an iconic, identity-concealing persona: A Demon, a Catman, a Spaceman, the Starchild.

The cover art concept for their 1974 debut was simple. The Demon, Catman, Spaceman and Starchild would stick their heads out from behind a black curtain, in a style similar to the Beatles‘ 1963 album With the Beatles, to put as much focus as possible on their painted faces.

The only problem was that photographer Joel Brodsky, who also shot famous covers for the Doors, Carly Simon and Funkadelic, didn’t realize that Kiss were serious about their look. “When we showed up at his studio, he was very friendly and seemed genuinely excited,” Stanley recalls in 2014’s Face the Music: A Life Exposed. “‘Look what I’ve got for you!,’ he said. He brought out a carton filled with all sorts of straw hats and red rubber noses.”

“Oh, I get it, you guys are like clowns,” Simmons remembers the photographer saying in Nothing to Lose: The Making of Kiss 1972-1975. “Wait, let me get some balloons.”

The duo quickly set Brodsky straight. “No, I don’t think you understand,” said Stanley. “We’re serious. We’re not clowns. This is what we do.” According to the frontman, such misunderstandings were common in the band’s early days. “A lot of people didn’t understand that this wasn’t fun and games to us. It wasn’t frivolous. It was a religion. It was a crusade.”

Both Frehley and Criss look slightly different than usual on the Kiss album cover for other reasons. Before the shoot, the guitarist used a silver paint to lighten up his usually dark brown hair. It was later rumored that an allergic reaction from this spray caused Frehley to temporarily lose his sight, a myth he debunked in a 2014 interview with Loudwire.

Instead of applying his own makeup as the rest of his bandmates did, Criss elected to let the makeup person hired by Brodsky create a new and much more ornate design. In Face the Music, Stanley described the end result as “some sort of tribal lion mask. We had never seen that makeup before, and we were glad not to see it again.”

Criss has backed up Stanley and Simmons’ version of the straw hats, balloons and rubber noses story, but it should be noted that in the 2004 book Kiss: Behind the Mask, Brodsky begs to differ. “The story about me wanting to put balloons behind them, thinking they were circus clowns, is not true. That’s someone’s imagination.”

As you can see from the gallery below, this wouldn’t be the last time a Kiss album cover was the subject of last-minute changes, debate or controversy.