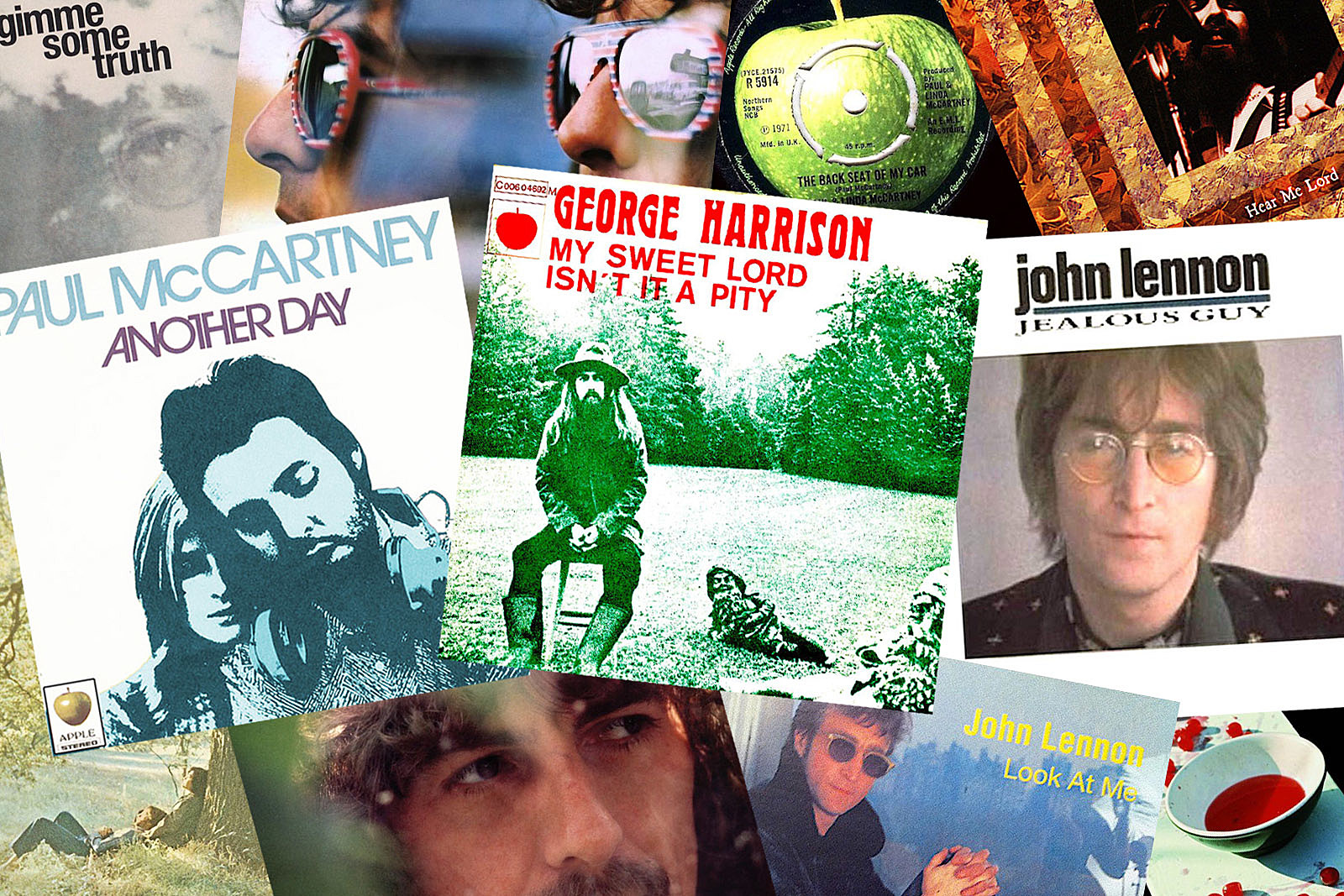 George Harrison‘s late-era emergence as a songwriting force is, perhaps unsurprisingly, an underlying theme on the below list of Top 20 Unfinished Beatles Songs That Ended Up on Solo Projects.

He accounts for more than half of the songs on the list. But Harrison also continued returning to this stockpile for a longer period, finishing incomplete ideas on albums released many years later – including 1976’s Thirty Three & 1/3 and 1982’s Gone Troppo.

By contrast, John Lennon and Paul McCartney quickly left those days behind. Lennon recorded “Jealous Guy,” an update of his White Album-period demo “Child of Nature,” just a year after the Beatles’ final album arrived in stores. By then, McCartney had already completed his solo version of “Back Seat of My Car,” which he originally offered to his bandmates in 1969. They never looked back again.

Beyond that Ram deep cut, the drawn-out Let It Be sessions accounted for a list-leading 10 other solo moments; the fertile period leading up to the White Album produced seven others.

In the end, some of the old magic remained: Harrison’s “Isn’t It a Pity” became part of a double-sided No. 1 single with “My Sweet Lord.” “Another Day” was McCartney’s first solo hit, rising to No. 2 in the U.K. and No. 5 in the U.S. Lennon’s “Jealous Guy” emerged as one of his most-covered songs, including a 1980 version by Roxy Music that topped the U.K. chart.

Others tracks can be found tucked away in their solo discography, serving as small reminders of what might have been, as you’ll see in the below list of the Top 20 Unfinished Beatles Songs That Ended Up on Solo Projects.

Harrison’s initial take on “Circles” – recorded on a warbling organ as the others apparently continued a conversation – was basically forgotten as the Beatles demoed 27 songs during sweeping May 1968 sessions held at his Esher bungalow. Nearly 20 of them ended up on the White Album, while “Circles” gathered dust until Harrison finally returned to it 14 years later.

The Beatles made several passes at “Teddy Boy” in January 1969, one of which was included on Glyn Johns’ shelved edition of Get Back. John Lennon was simply not interested, as he can be heard openly mocking the tune (“take your partners, and do-si-do”) during an edit from the sessions released on 1996’s Anthology 3. McCartney ended up keeping “Teddy Boy” for himself.

Harrison thought so much of “Hear Me Lord” that he made it the closing song on the sprawling All Things Must Pass, before tacking on some loose jam recordings. Perhaps because of its overtly religious theme, the Beatles didn’t share his enthusiasm. They ran through the song in January 1969 at Twickenham, but never returned to it during the final Savile Row-based sessions that completed Let It Be.

Written in response to public criticism when Paul McCartney admitted to trying LSD, Harrison’s time signature-shifting “See Yourself” is one of the oldest entries on this list of Top 20 Unfinished Beatles Songs That Ended Up on Solo Projects. When it finally emerged almost 10 years later on Thirty Three & 1/3, Harrison had decorated an elliptical lyric about self-realization with some noodly time-specific synthesizers.

McCartney wrote this delicately conveyed song, along with “Teddy Boy,” during the Beatles’ visit to India in 1968. He demoed both tunes at Esher, and both were passed over until his debut solo album appeared two years later. The Beatles-period version has since been issued twice, first in slightly shorter form on Anthology 3 and then as a longer take on the expanded White Album reissue. Not much had changed when “Junk” finally appeared on McCartney – except (again) its length. He’d trimmed it by about half a minute.

Harrison wrote “Wah-Wah” on the day he briefly walked out of an unhappy Beatles recording date, and it shows: He never rocked harder on All Things Must Pass, a necessity amid so many meditations on higher consciousness and faith. More than another snippy put-down song, “Wah-Wah” emerged as an article of solo faith: “I know how sweet life can be,” Harrison cries out from the din, “so I’ll keep myself free.”

Lennon began this song during the White Album sessions, and he retained that era’s feel by inviting Harrison to take over on guitar. But much had changed in the interim, as Yoko Ono became a key – though often overlooked – lyrical collaborator. Her fingerprints are all over “Oh My Love,” with its diaphanous references to clouds and wind. This became the only official Lennon-Ono collaboration on Imagine.

The emotional toll of the Beatles’ troubles is writ large during a song Harrison wrote before they reassembled for Abbey Road. As he wrestled with a rueful kind of love, co-producer Phil Spector allowed for a rootsy, Band-like musical structure. That moment of surprising restraint was later underscored when one of Harrison’s initial run-throughs appeared on 2012’s Early Takes Vol. 1. Spector didn’t add much; he didn’t have to.

Harrison began work on “Woman Don’t You Cry for Me” during his guest turn on a Delaney and Bonnie tour held after Abbey Road arrived but long before the Beatles officially split. It subsequently became a contender for All Things Must Pass, but was instead shelved for years. At that point, this song’s principal innovation – unheard on the acoustic-driven version from Early Takes Vol. 1 – had become old hat: Harrison tried out slide guitar for the first time while writing “Woman Don’t You Cry for Me.”

Another song off the pile written in India in 1968, “Look at Me” unwittingly posed questions of identity and purpose that formed the basis of Plastic Ono Band, so it was a perfect fit. On the finished version, Lennon retained the throwback Merle Travis-style picking that drove other standout moments from the White Album, notably “Julia.” The demo released on 2004’s Acoustic featured a more straightforward approach on the guitar, however, and didn’t double the vocal.

Harrison just wouldn’t give up on this one. “Isn’t It a Pity” was notably tried during January 1969 Beatles sessions under the not-very-intriguing title of “George’s Demo.” (Perhaps unsurprisingly, it went nowhere.) At that point, he’d apparently been fooling around with some form of this song since the Revolver period. When Harrison finally got a chance to record it, he included two takes on All Things Must Pass. Harrison then paired version one of “Isn’t It a Pity” with “My Sweet Lord” to create his double A-side debut solo single.

McCartney presented “Another Day” at Twickenham and then at Apple in January 1969, having basically completed the verses. It didn’t stick, perhaps because the song so closely recalled the everyday-people themes of “Eleanor Rigby.” McCartney went back as sessions began for Ram, and “Another Day” became his solo debut single – but only after he changed the songwriting credits to “Paul and Linda McCartney” while in the midst of a royalty dispute.

One of the great lost Beatles tracks, “Not Guilty” should have ranked higher on our list of Top 20 Unfinished Beatles Songs That Ended Up on Solo Projects. Unfortunately, Harrison’s adult contemporary-ish solo version drained all the blood out of it. Things started out much differently, as heard on highly superior Beatles outtakes. The Anthology 3 version, recorded in August 1968, features a shelved edit; 2018’s expanded White Album reissue restored the entire 4:28 running time and also included the original Esher demo.

The multipart Brian Wilson-inspired finale to Ram was also offered to the Beatles, but in much more unfinished form. McCartney’s belief in the song, which finds a pair of love-struck teens taking on the world, was nevertheless unwavering. He even released “Back Seat of My Car” as a single, though it just barely cracked the Top 40 – likely because of its compositional complexity.

Harrison started “Beautiful Girl” with the Beatles, creating something that the late writer Nicholas Schaffner rightly noted felt like a callback to Rubber Soul. He then tried out the still-unfinished song during May 1970 sessions for All Things Must Pass, but ultimately didn’t find a way to complete it until he found love with Olivia Arias. Billy Preston stopped by to add a remarkable turn at the organ.

McCartney’s failed January 1969 attempts at “Every Night” included some unfortunate slide contributions from Lennon. McCartney ended up completing his own version on the same day he cut “Maybe I’m Amazed” at Abbey Road in February 1970. Recording alone, he perhaps unconsciously returned to the melody of “You Never Give Me Your Money” during the song’s wordless bridge. He never released “Every Night” as a single, but it became a modern-era concert staple.

“Gimme Some Truth” took a winding road to its Side 2-opening slot on Imagine. Lennon’s initial idea for the song grew out of the Beatles’ 1968 trip to study Transcendental Meditation with Maharishi Mahesh Yogi in Rishikesh, India. He later briefly revived it during the Let It Be sessions, before reworking the entire thing with stinging new Nixon-inspired invective in May 1971. Harrison’s slide-guitar solo is just as delightfully churlish.

Harrison tried to get the others to make this a proper Beatles recording on at least four different days in January 1969, to no avail. It was their loss. Harrison’s episodic tribute to the ageless tension between worldliness and spirituality became a highlight of All Things Must Pass. He personally oversaw a 30th-anniversary reissue that included a gorgeous new version of the song, combining the original demo with additional new instrumentation.

Inspired by a talk given by the maharishi in Rishikesh, Lennon demoed “Child of Nature” before the White Album sessions and then tried it again on the first day recording the album that became Let It Be. But the song remained unfinished until Lennon restructured it into “Jealous Guy” a few years later. His original Esher version still includes an idyllic ’60s-style theme (and a reference to the Beatles’ time in India), but the melodic structure is the same.

Harrison initially gave “All Things Must Pass” to Billy Preston when the Beatles rejected it. By the time Preston’s version arrived in September 1970, Harrison had thankfully decided to take it back. Like “Run of the Mill,” his subsequent update was influenced by the the Band’s recent Music From Big Pink. Two earlier tries have since been officially released: Harrison is unaccompanied on the double-tracked birthday demo found on Anthology 3, while the Early Takes version features an uncredited backing band.