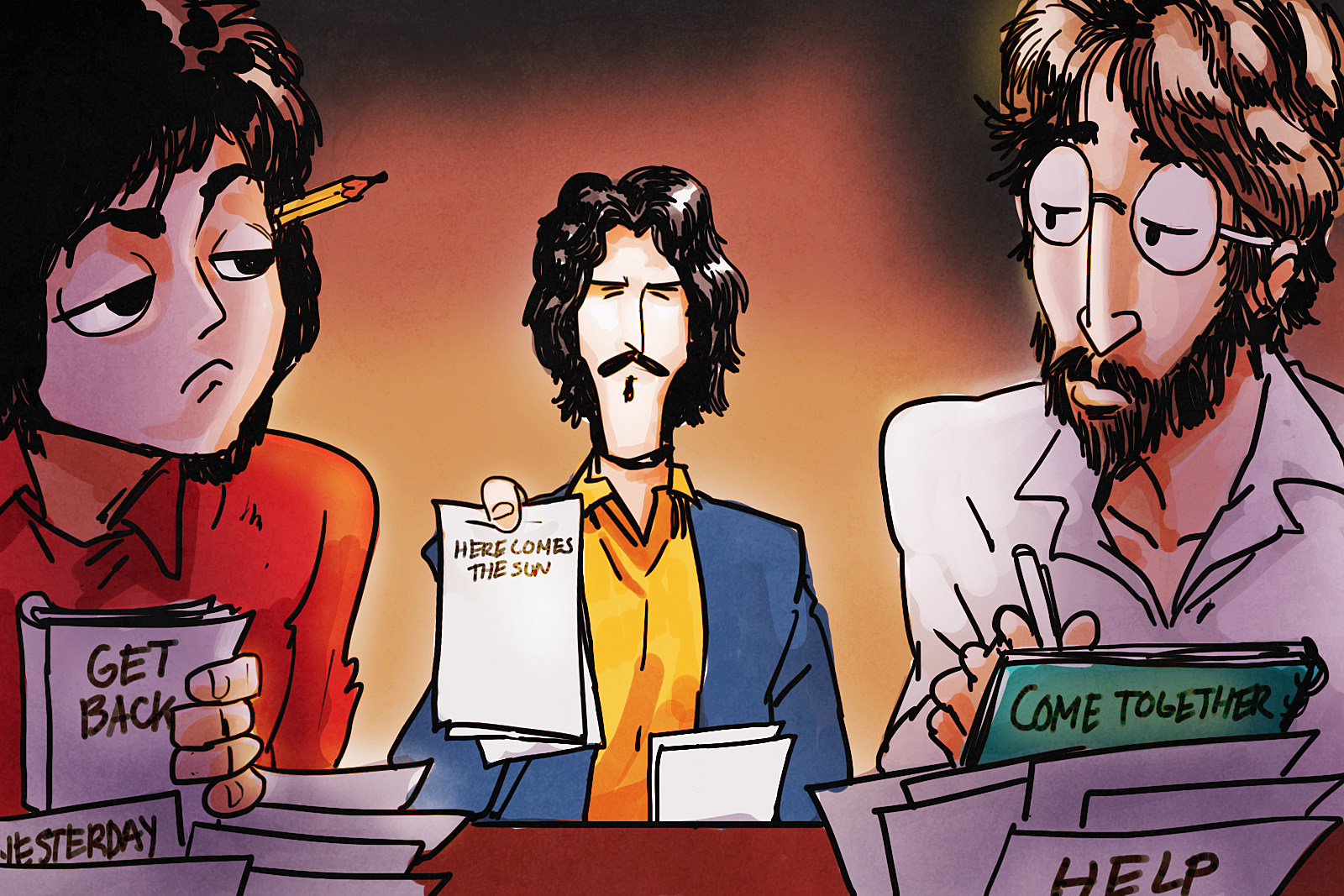 John Lennon was the dominant early creative force in the Beatles. But Paul McCartney quickly began to catch up as their career together unfolded. George Harrison made a late push into songwriting as well.

So, who wrote the most Beatles songs?

As you’ll see, there are individual albums where Lennon and McCartney take center stage. Lennon, for instance, wrote or co-wrote an astonishing 10 songs for 1964’s A Hard Days Night. On the other hand, McCartney is credited for the vast majority of 1967’s Sgt. Pepper’s Lonely Hearts Club Band.

On several occasions, things were in complete equilibrium: 1965’s Help! and Rubber Soul, and 1966’s Revolver. They basically split the songwriting difference on 1968’s The Beatles, too. But there was clearly a sense of competition about things: Lennon would write “Day Tripper” and McCartney delivered “We Can Work It Out”; Lennon brought in “Strawberry Fields Forever,” and McCartney countered with “Penny Lane.”

All were ascribed to “Lennon-McCartney,” creating lingering questions about who did what. One resourceful fan became so desperate to figure it out that he resorted to mathematical formulas.

There have been a few surprising admissions along the way: Lennon later told David Scheff that he had a big hand in creating “Eleanor Rigby,” which is typically credited solely to McCartney. (“The first verse was his,” Lennon said in his final major interview, “and the rest are basically mine.”) Meanwhile, McCartney revealed that he wrote the melody for “In My Life,” a track that has become intrinsically linked to Lennon.

We’re taking the Beatles’ word for it, since they were the only ones in the room – save for producer George Martin and engineers like Geoff Emerick – as their storied discography was created.

The junior members of the Beatles’ songwriting stable are also included here, though Harrison didn’t begin to make major statements of his own until the group’s later era. (The youngest member of the Beatles had only one credit over their first four studio albums – but then made 11 contributions over their final four.) Ringo Starr often sang others’ words, but added a handful of songwriting credits as well.

We’re focusing on officially released Beatles songs, not bootlegs, radio recordings, anthology extras or songs they gave away. Keep reading to find out who wrote the most Beatles songs: It’s a rundown that promises a photo finish.

Considering the majority of this zippy debut album was recorded on a single day – Feb. 11, 1963, to be precise – Please Please Me is a wonder of pop smarts and lyrical wit. Lennon wrote one more song than did McCartney for the final track listing, giving away “Do You Want to Know a Secret” for Harrison to sing.

Released only a matter of months after the debut, With the Beatles found the prolific Lennon again writing one more tune than McCartney – but McCartney scores the biggest hit with “All My Loving.” Harrison makes his songwriting debut, but the throwaway, decidedly standoffish “Don’t Bother Me” hardly points to the wonders of his late-’60s output.

Harrison vanished just as quickly as he’d appeared, with Lennon taking center stage for the Beatles’ first major motion-picture project. McCartney had only three originals, but he made every one count. A Hard Day’s Night includes three of his best early songs.

McCartney’s ascension as the group’s most prolific late-period songwriter was officially underway. This is the first – but certainly not the last – album in which Lennon doesn’t dominate, in this case likely because he had run out of gas creatively so soon after A Hard Day’s Night. So, Beatles for Sale is heavily populated with cover songs. Harrison is missing again, relegated to singing one of Lennon’s tunes.

This album found the Beatles turning a creative corner, and that included Harrison, too. “I Need You” was his most fully formed composition to date. But as with their last movie project, Lennon is firing on all cylinders: Two of his contributions went to No. 1. Meanwhile, McCartney contributes a timeless classic with “Yesterday” – but in a sign of things to come, nobody else performed on it.

Touring now nearly behind them, the Beatles completed the first project that felt like an album-length experience. This finally gave them the space to experiment with sound and feel, notably on Lennon’s sitar-driven “Norwegian Wood.” Starr earns his first-ever co-writing credit on the tangy “What Goes On,” while Harrison offers a convincing jangle with “If I Needed Someone.”

The Beatles’s best album is a balancing act of Lennon-McCartney brilliance, as they showcase every element of their songwriting genius. Even the goofy song they gave to Starr is a triumph of childlike wonder. Harrison earns the coveted opening slot with “Taxman,” part of a three-song flurry of activity – the most he’d ever have on a single-album Beatles release.

McCartney took a leadership role in conceiving and executing this project, and that plays out in the songwriting totals. He even made a key contribution to Lennon’s crowning-achievement finale. The increasingly spiritual Harrison didn’t think much of the album concept, relegating himself to just one entry for Sgt. Pepper’s – and none of his bandmates are featured on his raga-inspired “Within You Without You.”

Originally an EP release in the Beatles’ native U.K., Magical Mystery Tour was another McCartney-driven concept. Lennon contributed the titanic “I Am the Walrus” but otherwise was largely silent. (The full-length U.S. version included three stand-alone Lennon singles to balance things out.) “Flying” was the only Beatles instrumental ever released by EMI, and the first-ever song credited to all four members.

Everybody came back from a trip to India with a satchel full of songs – including Starr, who garners his first-ever solo composing credit. It’s worth noting, however, that there isn’t a single collaborative song here. In many cases, the others simply served as a backing band for the main composer. Some of the songs were even recorded as solo projects. That underscores both the irony of self-titling this project and the issues still to come for a splintering group.

The soundtrack to an animated film of the same name included some previously issued songs (including Starr’s title track), some songs that had earlier been left on the cutting-room floor (including Harrison’s “Only a Northern Song,” a Sgt. Pepper-era reject) and one killer rock song (“Hey Bulldog”) that somehow found Lennon and McCartney collaborating again like the days of yore.

Recorded after Let It Be but released before, Abbey Road is the sound of the Beatles giving it one more try. Glad they did. Lennon came in with two great ideas (“Come Together” and “I Want You”), then acquiesced to McCartney’s soaring Side Two medley concept by handing over some witty unfinished snippets. Harrison’s striking pair of contributions, however, make it clear that the center can’t hold much longer. Really, it’s a miracle that these wildly creative voices had been contained in one unit for this long.

A by-then rare Lennon-McCartney co-write on “I’ve Got a Feeling” was really just a combining of two other stray ideas. Otherwise, Lennon’s late-period recession continued: “Across the Universe” had been bouncing around for a couple of years at this point. McCartney wrote the album’s two big hits, while Harrison’s “I Me Mine” provided a glimpse into his Phil Spector-produced early-solo sound.

Lennon was the principal songwriter on the Beatles’ stand-alone singles; the bulk of McCartney’s credits recognize his collaborative role. Lennon also began the demo that sparked the band’s reunion in his absence for “Free as a Bird.” The other three Beatles completed the song in the mid-’90s, 25 years after their final sessions together. Back then, they’d gathered to finish recording Harrison’s “I Me Mine” – and Lennon wasn’t there that day either.