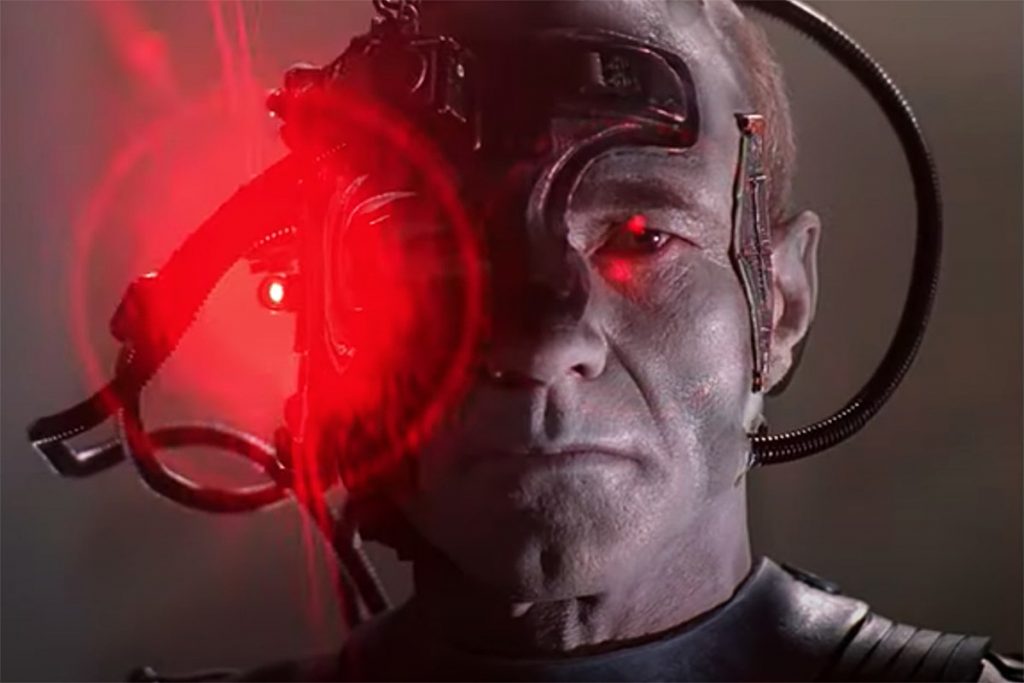 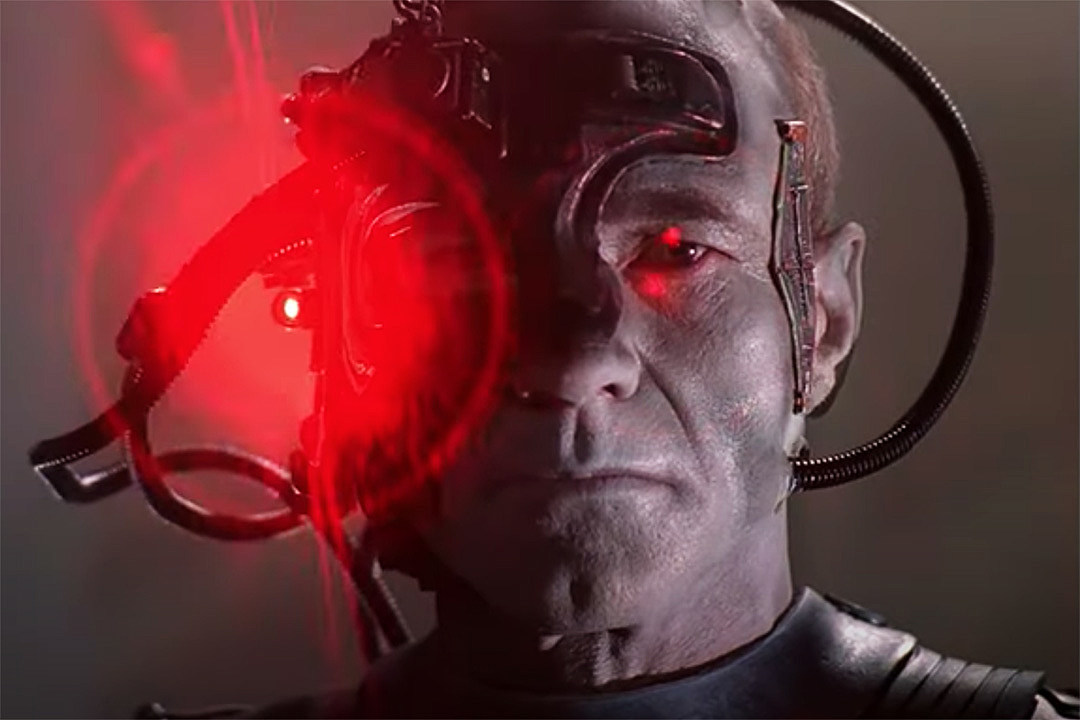 On June 18, 1990, Capt. Jean Luc Picard appeared on the view screen on the Enterprise bridge, half his face covered with the robotic additions forced upon him by the genocidal Borg Collective.

A red laser shined from the side of his face into the screen. From the Borg ship he told Commander William Riker, “I am Locutus of Borg. Resistance is futile. Your life as it has been is over. From this time forward you will service us.” The laser filled the screen. The camera approached and turned on Riker, who, without looking at his weapons officer, gave the instruction: “Mr. Worf, fire.”

So ended the episode that’s reputed to have secured the position of Star Trek: The Next Generation in the long-running franchise’s history. “The Best of Both Worlds, Part 1” was the final episode of the third season, but the show had struggled against Trekkies’ loyalty to William Shatner’s Captain Kirk and the original series. It worked, in part, because it was a strong story – and also because it was the first-ever Star Trek cliffhanger, and one of the few times the leading character of a leading TV show had been put at risk.

The Borg were previously featured on TNG and proved themselves to be an archenemy in the vein of Doctor Who’s Daleks. Terrifyingly advanced, they valued improvement over everything, including life, and existed only to assimilate other races, leaving no survivors. While leading Star Trek characters like Spock and Data became icons of the franchise, as non-humans who revealed who we are as we struggle to better ourselves, the Borg depicted the complete rejection of humanity as an element of improvement.

At the end of the third season, they’ve had their interest piqued by humanity and, concluding that a less direct approach is the best way to assimilate the best of the race, they form a plan to have a human spokesperson who’ll streamline the process with minimal massacres. Hence the arrival of a Borg cube, the kidnapping of Picard, the failure of his crew’s attempts to rescue him and his reappearance as Locutus, the voice of the Collective – leading up to the final scene, in which Riker gives the command to open fire on his captain.

Watch ‘Star Trek: The Next Generation’: ‘The Best of Both Worlds, Part 1’ Cliffhanger

“All of us were quite thrilled they had the balls to leave Picard on the Borg cube,” said Jonathan Frakes (who played Riker) in 2015. “It’s commonplace now. Shows like Lost and House of Cards — they’ll kill off a regular and think nothing of it. This was 1990. It was not commonplace to be killing off any of your series regulars. That was a big ‘Who shot J.R.’ type of plot.”

Riker’s future was also at stake in the episode. After two seasons of being seen as the “best number one in Starfleet,” it seemed strange he didn’t have his own command, and protestations that he was happy where he was didn’t sit well with the ambitious young officer he appeared to be. But while he dealt with the possibility of killing the senior officer who’d helped turn him into an even better number one, he was also trying to decide whether to accept his first command, while a younger and even more ambitious officer, Shelby, vied to take his place on the Enterprise. “The episode was key to Riker’s character,” Frakes said. “Previously, I thought it was not very cleverly handled.”

With Picard’s future seemingly stolen from him after being kidnapped by the Borg and turned into the spokesperson they’d use to make assimilating the human race easier, and Riker’s future in doubt because he had a crisis of loyalty, putting the two characters head-to-head made for very powerful drama. There was always the possibility that if Picard didn’t survive, Riker could become a captain without leaving his home ship.

A real-life dilemma helped inspire late writer Michael Piller, who, unusually, didn’t share the plot-development chores with the rest of the writers room. “Michael had a very personal connection to that particular story,” fellow script creator Ronald D. Moore said. “The episode starts with Riker getting an offer to go command another ship. … Michael said very overtly that he was in a very similar place. He was the number two guy on the show, and he was debating whether or not to leave Star Trek and go and run his own show. … So, he was Riker, and he wrote the story from that perspective. … When Michael did ‘Part I,’ he said, ‘I have no idea how this thing ends. We’re going to end on this cliffhanger of “fire” and we’re going to figure it out next season.’”

Watch ‘STTNG’ ‘The Best of Both Worlds, Part 1’ Trailer

Rumors persisted that the cliffhanger was in part a producers’ ploy to put pressure on Patrick Stewart (Picard), whose contract was ending and whose agents were applying their own pressure, while the actor had made some outspoken comments about TNG. But Stewart denied his position was ever in doubt, saying in 1999, “I speak my mind about all the work I’ve been involved with. There have been times when I’ve perhaps been too public with opinions that should have been expressed privately. But, as far as the series was concerned,I was always very proud of it. … There was never a point when I tried to leave, despite popular opinion.”

“The Best of Both World, Part 1” closed with the caption “To be continued … ” and fans began a three-month wait to find out what would happen next. That’s the element that appears to have helped TNG find favor with the TOS hardcore. “What people forget now is in the first couple of seasons of Next Generation, we were sort of not taken seriously as Star Trek,” Moore observed.

“You would go to conventions and there would be bumper stickers and T-shirts that basically said, ‘I’m a real Trekker. Forget the bald guy.’ … When ‘Best of Both Worlds’ came out, suddenly there was all this buzz. And it got in the press and there was all this tension and people were talking about the cliffhanger and Picard. … Suddenly, we had done something that was legitimate and got people’s attention and told a great story. From then on out we carried the torch. We were legitimate and that was the show that turned it around for us.”

In 2013, Frakes argued that an additional layer of tension was added onscreen because even the producers, writers and cast didn’t know how the plot would be resolved. “We were left hanging out to dry,” he said. “And I think it was that seriousness of the story that made for such a brilliant cliffhanger. I think it is one of the greatest cliffhangers in television history.”

However, if Stewart had his way, the episode would never have been made. “I originally said no to doing it,” he recalled in 2020. “I remember questioning whether that storyline was a good one to follow. I wasn’t sure that it was.” As he struggled to work out how to depict what was happening to Picard, he found inspiration in the makeup room. “The best part about Locutus was that I have something to reference, the drama Picard had to endure … the makeup process for me, which was extremely unpleasant and painful and unsettling. No experience is wasted.”

The story was indeed continued with “The Best of Both Worlds, Part 2” as the fourth-season opener, though it wasn’t exactly completed. Even after Picard was saved from the Borg, the experience he had at their hands would fuel many other stories, including the TNG episode “Family” and the plot for Star Trek: First Contact. It also supplied one of the main themes for the first season of Star Trek: Picard.