45 Years Ago: ‘The Deep’ Almost Bellyflops 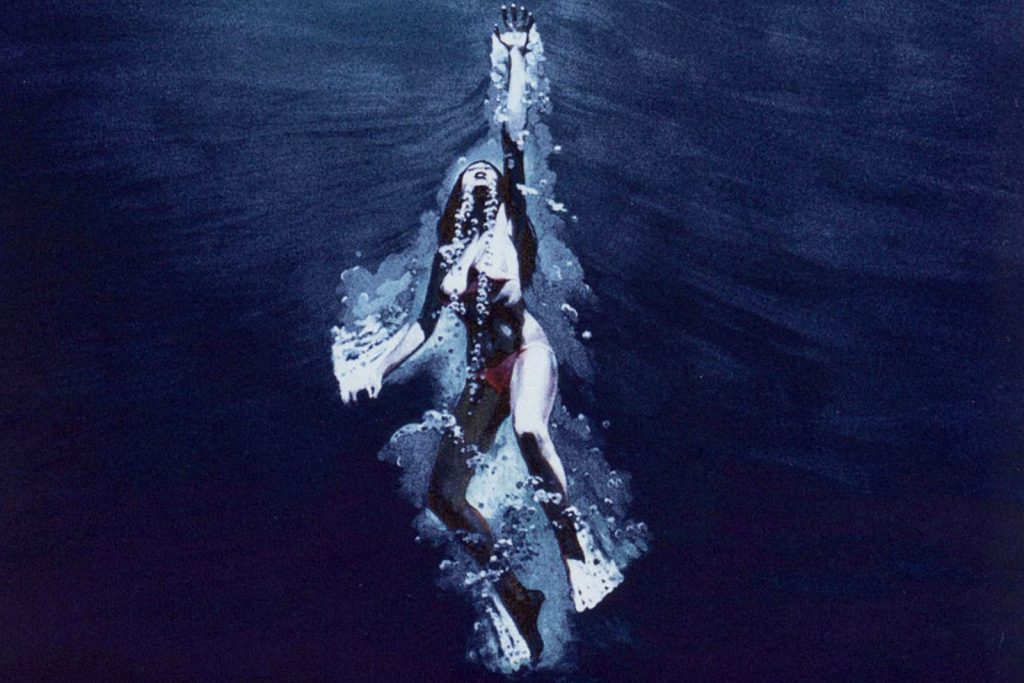 One of the most important things to remember about movies is that it’s incredibly hard to make a good one. A film can have everything going for it – an exciting story, a good director, star power, a great location, a phenomenal marketing campaign and all the rest – and still not sniff greatness, because it lacks that one last thing.

Call it magic, call it luck, call it the touch of fate: If it’s missing, a film’s not going to fully succeed. For an example, look no further than The Deep, which was set up in the summer of 1977 to be a mega-hit and succeeding only in being mediocre.

The film’s beginnings, like so much of ’70s cinema, lie with the phenomenal success of Steven Spielberg’s Jaws two years before. That film had been based on a novel by Peter Benchley, made by a stylish director and featured an adventurous water-born story. So why not use all of those elements again?

Columbia Pictures bought the rights to Benchley’s follow-up novel about treasure hunting off Bermuda. They hired Peter Yates to direct, who had a number of fine action movies on his resume, including the classic 1968 Steve McQueen vehicle Bullitt and the 1973 Robert Mitchum gem The Friends of Eddie Coyle.

They also cast a mix of established and up-and-coming actors to give The Deep both street cred and buzz: Robert Shaw, who had given an all-time great performance as Quint in Jaws; Eli Wallach, who was never less than stellar in any of the 90-some films he appeared in; Jacqueline Bisset, whose it-girl looks belied her serious acting chops; and Nick Nolte, who had only one other big feature film to his credit but was clearly on the cusp of stardom.

Watch the Trailer for ‘The Deep’

Released in the summer of 1977, The film featuring all of this talent follows a young couple named David Sanders and Gail Berke (Nolte and Bisset), who discover what appears to be a piece of treasure from a sunken Spanish galleon when they’re diving off the coast of Bermuda. On the same dive, they also find what turns out to be a small ampule of morphine from a sunken World War II cargo ship.

They take the gold to local treasure hunter Romer Treece (Shaw), who eventually helps them discover that because the two ships sank more or less on top of each other, the Spanish gold has been covered by the World War II wreck. Unfortunately, the morphine attracts the attention of a Haitian drug-runner named Henri Bondurant (Louis Gossett Jr.), who is determined to bring up the rest of the shipment of morphine and sell it on the street.

Bondurant torments the young couple with some voodoo shenanigans until they and Treece agree to bring the morphine up and sell it to him. When he finds out through a local rummy named Adam Coffin (Wallach) that they’re more interested in salvaging the treasure than his drugs, however, Bondurant takes two of his henchmen out to the dive site to kill them. Instead, Bondurant is killed by a giant moray eel that haunts the area, and the good guys get away with the treasure.

Although the movie doesn’t work, it’s not for a lack of trying. The Deep was filmed on location in Bermuda, and all of the primary actors (along with Yates) learned to dive so they could shoot their own underwater scenes. Some of these were shot at depths of up to 100 feet, and Nolte and Bisset both survived potentially fatal moments in the process.

To expedite filming of the sequences in the World War II wreck, a million-gallon pool was constructed to serve as an underwater soundstage. Because so much of The Deep was set in the water, new technology was invented for the film, including a rig whereby a Panavision camera could shoot underwater, and 5,000-watt underwater lights.

Watch the Main Title Scuba Diving Sequence From ‘The Deep’

Due in large part to an $8 million ad campaign – which included pilfered photos of Bisset in a see-through teeshirt, as well as a Marvel comic-book adaptation ­­– The Deep turned a profit on its release. But all the promotions, all the money and all the effort on the part of the actors and crew couldn’t quite cover up the fact that the movie is resoundingly flat.

The problems start with the story, despite the fact that a first draft of the script was written by Benchley himself then polished by screenwriters Tracy Keenan Wynn and Tom Mankiewicz. The trope of two ships wrecked one on top of the other might work in a novel, where there’s unlimited room for exposition, but it becomes deflating in The Deep. Rather than focusing on either the gold-hunting storyline or the morphine-salvaging one, the plot bounces aimlessly from one to the other.

Nor does The Deep do well with its particulars. There are certainly some good underwater sequences, but too much of the rest never comes together. The giant moray eel feels gimmicky – like a grade-school knock-off of the shark in Jaws – and exists in the film solely for the purpose of killing the bad guy in the final scene.

Bondurant’s voodoo sequences are half-hearted at best: at one point he tortures Berke by dipping a chicken foot in blood and rubbing it on her stomach, which is certainly unpleasant, but not really a cause for a screaming breakdown. Despite the two-hour-plus runtime, there is neither any real character development nor any sources of internal conflict between them. The people who want the drugs are bad, and the people who want the treasure are good – and it’s all just as bland as that.

In the end, the financial success of The Deep saved its short-term reputation. Yates went on to direct the wonderful Breaking Away, and many other films. The actors all continued booking good roles. Looking back, however, it’s clear that the movie came uncomfortably close to becoming the kind of flop that would have put a serious dent in people’s careers – because making a good movie is a hard thing to do.