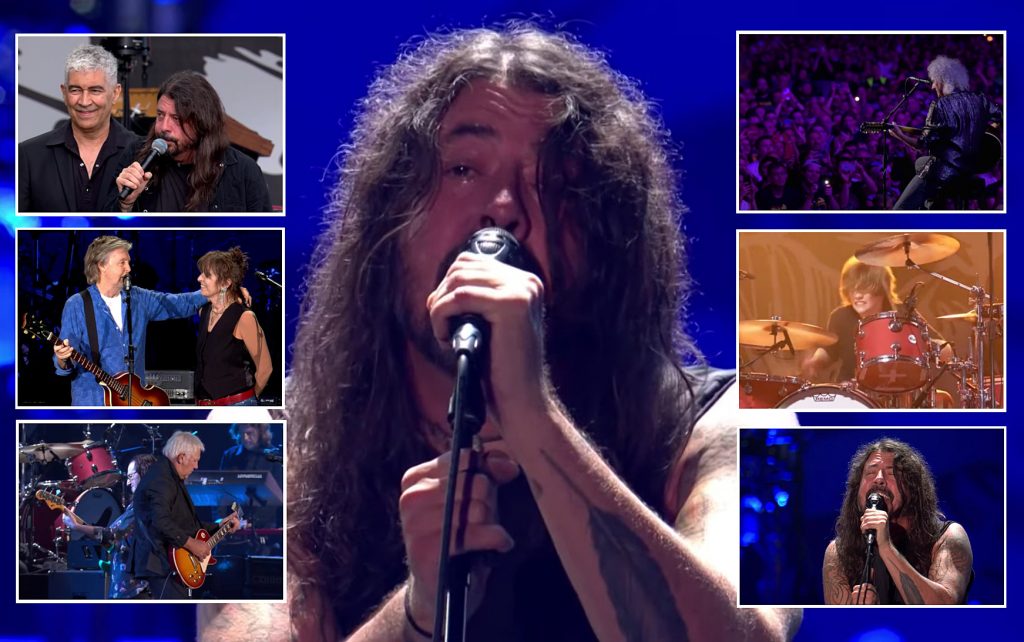 While the event was much more of a celebration of life than a mournful affair, emotions naturally ran high. That’s to be expected given the circumstances. In March, Hawkins’ tragic death sent shockwaves through the music world, as fans and fellow musicians alike were stunned by the unexpected loss.

A Rock & Roll Hall of Famer thanks to his work with the Foo Fighters, Hawkins was extremely passionate about music. The drummer regularly forged friendships with other musicians, including those whom he grew up idolizing. He also mentored younger artists, lending his own knowledge to future stars.

The London tribute concert featured many moments of humor, happiness, poignancy and sorrow. Below, we’ve rounded up seven tear-jerking moments from the incredible show.

Dave Grohl’s Opening Speech
The Foo Fighters were welcomed with a thunderous ovation as they walked on stage to welcome fans at Wembley Stadium, as well as those watching at home. Before Dave Grohl could even get a word out, thousands of fans in attendance began chanting “Taylor! Taylor!” prompting the frontman to take a moment to let the sound wash over everyone.

“Ladies and gentlemen, tonight we’ve gathered here to celebrate the life, the music, and the love of our dear friend, our bandmate, our brother, Taylor Hawkins,” a visibly-moved Grohl then said. “For those of you who know him personally, you know that no one else can make you smile, or laugh or dance or sing, like he could. And for those of you that admired him from afar, I’m sure you’ve all felt the same thing. So, tonight, we’ve gathered with family and his closest friends, his musical heroes and greatest inspirations to bring you a gigantic fucking night for a gigantic fucking person. So, sing, and dance, and laugh and cry and fucking scream, and make some fucking noise so he can hear us right now.”

Rush Honors Two Drumming Icons
Hawking idolized Neil Peart, and was understandably crushed when the Rush drummer died in 2020. As Geddy Lee and Alex Lifeson joined Grohl and Greg Kurstin during the tribute concert, they made note of both departed drummers.

“So, for Alex and I, it’s a privilege to be up here to play with Super Dave, and Greg,” Lee explained. “In 2008, as Dave told you, we got a call from Foos’ management, asking if we’d come to the Toronto show and show up so that Taylor could play one of his favorite Rush songs with us. We obliged and that was the beginning of a beautiful friendship. So tonight, in honor of that — and in honor of our own lost brother,” Lee added, in a nod to Peart, “we’d like to play that song.”

The group then rocked through a powerful rendition of “YYZ.”

Brian May Conjures the Spirit of Freddie Mercury
Queen was one of Hawkins’ biggest influences, and though he eventually became close friends with Roger Taylor and Brian May, the drummer never seemed to lose his sense of fandom for the band. The Queen stalwarts delivered a dynamic five-song set in celebration of Hawkins, with May’s rendition of “Love of My Life” serving as an emotional high point.

“What an amazing evening of love and music – thank you for being here and for sharing all this stuff,” the guitarist declared as he took a seat with his acoustic guitar. “In 1986 we were on this exact spot, singing this song together, and in 1992, 30 years ago, we said goodbye to Freddie in a style similar to this. So I know Freddie would be happy to share this song in the memory of Taylor Hawkins.”

Thousands in attendance joined May as he performed the classic Queen ballad, with the guitarist encouraging them to hold up their cell phones. “Let’s light up Wembley Stadium for Taylor Hawkins,” the rocker declared, his instructions resulting in a display both stunning and heart wrenching.

Times Like These
While the event was engrossing from the start, fans were undoubtedly waiting on pins and needles for the Foo Fighters to perform their own material. The group had not taken the stage together since Hawkins’ death, and anticipation was high for their return. The band opted to begin their set with “Times Like These,” the moving tune off of 2002’s One by One. The song started in heartbreaking fashion, as Grohl, Hawkins bandmate and closest friend, struggled through the emotion of the moment. Through tears, the frontman sang the tune’s first two verses, the audience seeming to lift him up with every word. After the second chorus, Grohl and the rest of the Foo Fighters let loose, delivering a loud, cathartic second half of the song.

Macca Gets Choked Up
Paul McCartney has certainly dealt with his fair share of personal tragedies over the years, but nobody — regardless of how successful or revered they are — ever becomes numb to such loss. So, when McCartney came on stage to join the Foo Fighters for a pair of songs, the former Beatle got choked up explaining what the evening meant to him.

“God bless Taylor,” the icon declared, his voice wavering as he addressed the crowd. McCartney then announced a duet with Chrissie Hynde of the Pretenders, who joined him on stage. “Me and Chrissie are gonna do a special song here that I haven’t done since we recorded it a hundred years ago. I’ve never done it as a duet. But we’re gonna do it tonight, for the first time, for you.” The two singers, joined by Foo Fighters, then performed the Beatles classic “Oh! Darling.”

A Different Hawkins Takes the Spotlight
Most of the drummers who stepped behind the kit during the tribute concert are already legends. Yet, it was a musician most fans had likely never seen before who delivered one of the night’s most touching performances. Shane Hawkins, Taylor’s 16-year-old son, took his father’s chair behind the Foo Fighters and looked like a natural doing so. The young Hawkins seemed energized to honor his dad when he first arrived on stage, but Grohl motioned to him to pause for just a moment to appreciate all the love the crowd was bestowing on he and his family. After a breath, Hawkins — showcasing much of the charisma and talent that made his father a star — led the band through a soul-stirring rendition of “My Hero.”

Everlong
The final song of the night was arguably the Foo Fighters’ most beloved track, “Everlong.” But while the tune has traditionally been a raucous closing number during previous Foo Fighters shows, it took on a deeper sense of reflection here.

Much like he had started the Foo Fighters set, Grohl opted to end the show performing solo. The frontman, clearly exhausted from a long and emotional evening, earnestly thanked fans for joining them to celebrate one of his closest friends. The crowd sang along as Grohl crooned the classic tune, and as the final notes of “Everlong” were played, the frontman delivered a simple message.

“I love you Taylor,” Grohl proclaimed. “Let’s hear it big and loud for Taylor fucking Hawkins!”