A Primer for Radiohead’s Unheard ‘Kid A Mnesia’ Songs 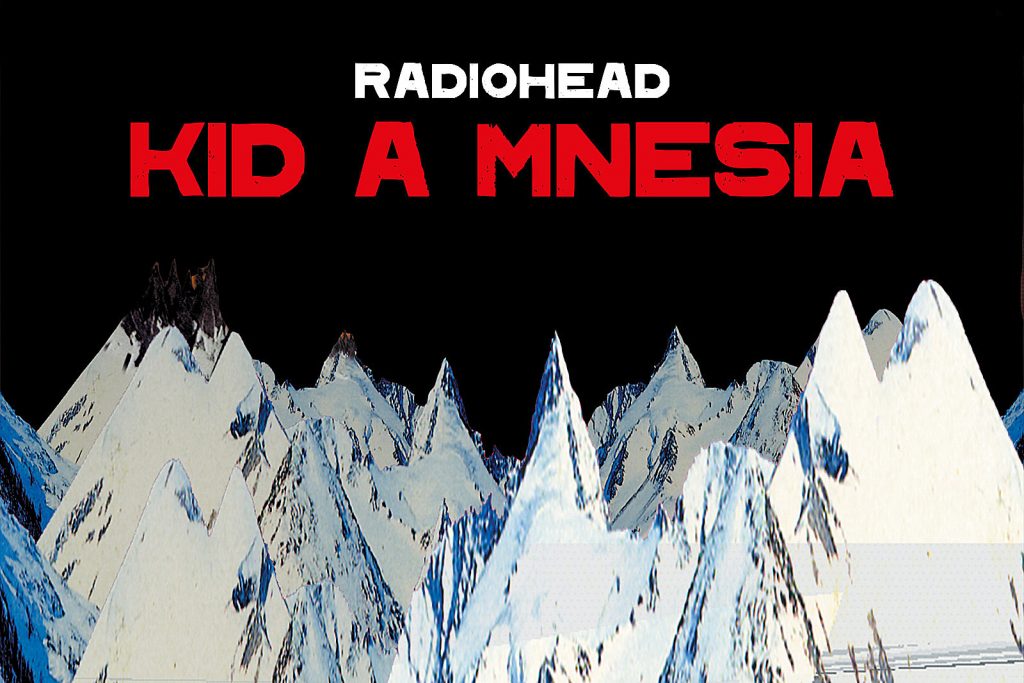 When Radiohead released 2001’s Amnesiac, most fans were surprised to find an alternate version of “Morning Bell,” the ghostly, loopy oddity that appeared on their earth-rattling electro-rock masterpiece Kid A.

Radiohead had become popular music’s most famous studio tinkerers, never afraid to scrap an arrangement and start completely from scratch. But during the sprawling sessions that spawned both Kid A and Amnesiac — which were nearly released as one double-LP — they recorded so much material that tracks often fell through the cracks.

“We literally forgot about [‘Morning Bell/Amnesiac’],” guitarist Ed O’Brien told Channel 4’s Planet Sound in 2001, according to the renown fan site Citizen Insane. “We often record different versions of songs, and the new one is the first time it has been strong enough to bear hearing again. Most of the other versions often get scrapped halfway through.”

He ended that thread with a kicker that, two decades later, is both fitting and kind of hilarious: “We’re saving them for our box set in 20 years when no one’s interested in us anymore.”

He nailed part of that prediction. Following the release of 2017’s OKNOTOK, an expansive 20th anniversary package for OK Computer, Radiohead-heads immediately started speculating about a joint Kid A/Amnesiac reissue: the formatting, the sequencing, the artwork and, crucially, what long-buried treasures might be unearthed. Alas, the band finally announced that long-awaited box set, Kid A Mnesia, featuring a third disc with 12 previously unheard cuts.

Consider this your primer: some spoiler-free history and conjecture on the year’s most coveted rarities.

While this track’s “Why Us?” parenthetical is likely a mystery, hardcore fans already know the tortured backstory of this eerie Amnesiac highlight. The original song sprung from an aborted take on “I Will,” a tale of post-apocalyptic parenting that the band revamped and rerecorded for 2003’s Hail to the Thief. But the original, synth-anchored “I Will” — later dismissed by front man Thom Yorke as “dodgy Kraftwerk” — was still put to good use.

Unsatisfied with the actual song, they reversed the recording, and Yorke was inspired by these new alien textures and the accidental sounds they’d shaped. “We’d turned the tape around, and I was in another room, heard the vocal melody coming backwards, and thought, ‘That’s miles better than he right way round’, then spent the rest of the night trying to learn the melody,” Yorke told The Wire in 2001 (per Citizen Insane). After endless experimentation, he wound up with a mostly reversed vocal that, when played forward, has intelligible lyrics — a strange in-between.

Listen to Radiohead’s Original Version of ‘Like Spinning Plates’

When Radiohead released the “disc box” version of 2007’s In Rainbows, they included a second album of leftover tracks, including a pair of short, ambient interludes titled “MK1” and “MK2.” These three “Untitled” tracks are similarly brief and vaguely titled, leading to much speculation about their origins. One of the mysteries was seemingly solved when a track titled “Untitled v1” popped up on YouTube, pairing garbled Yorke vocals, electronics and gleaming electric piano into a tumbling soundscape that feels like a mash-up of “Everything in Its Right Place,” “Kid A” and “Pulk/Pull Revolving Doors.”

“How to Disappear Into Strings”

The orchestrations — and Jonny Greenwood’s role in shaping them — marked a pivotal development in the Kid A era. And no track better illustrates that point than “How to Disappear Completely,” in which Radiohead drift through a dream state of suspended strings.

“We’ve kind of shirked away from strings in the past as they seem to have been recorded in the same manner for the last 30 years (ever since the Beatles),” O’Brien wrote in his online diary at the band’s website, detailing the protracted sessions. “Jonny is particularly keen to use an orchestra but not in the standard cliched way … more like the end of [OK Computer’s ‘Climbing Up the Walls’].”

The song was originally debuted live during the chaotic OK Computer tour, its title inspired by a stress-relieving mantra shared to Yorke by R.E.M.’s Michael Stipe. And its beautiful yet unsettling vibe seemed to spark something in a band rattled by creative indecision: The strings — conducted by John Lubbock and played by the Orchestra of St. John’s in a nearby church in Dorchester, England — were a particular boon.

“I think [producer/engineer Nigel Godrich] was totally blown away by the whole sound of it,” O’Brien noted. “But most importantly john and the players were so enthusiastic about it all … Jonny has certain things that he wants/wanted to try out that aren’t your usual string [arrangements]. And rather than dismiss his ideas (which is what happened on the ok computer session) they were open-minded enough to try them.”

Listen to Radiohead’s ‘How to Disappear Completely’

Few other songs, if any, hold such a lofty spot in the archival Radiohead canon — partly because it’s so great, partly because it’s been around so damn long without an official release. This stripped-down, unusually bluesy song dates back to the OK Computer sessions — and was even sound-checked by Yorke during that tour, as famously documented in the harrowing band documentary Meeting People Is Easy.

Their attempts to nail the tune during Kid A/Amnesiac were equally unfruitful at the time: “twice around ‘follow me around’ – mmm. Not great,” O’Brien wrote in his diary. Despite leaving it off both track lists, Radiohead just couldn’t quit “Follow Me Around,” playing it live various times over the years. (Yorke also performed the song with his side band Atoms for Peace in 2010; then he and Greenwood dusted it off seven years later for a riveting duo version heavy on droning loops and drum machine.)

Even though Radiohead have revived songs numerous times for later albums (see: “Nude” on In Rainbows, “Burn the Witch” for A Moon Shaped Pool), they apparently couldn’t figure this one out. Perhaps it’s best preserved as part of a reissue time capsule.

“Fast-Track” is one of the most demented Radiohead B-sides, an experimental collage of creepy effects, manipulated vocals and droning rhythms. The track, released on a “Pyramid Song” single, began with a rough Yorke arrangement in the Cubase recording software, augmented by O’Brien’s wild tones from a Roland guitar synth. “[Godrich] is really into this thing of throwing down random shit and then simply keeping the really good stuff,” O’Brien wrote in his diary. “It’s a cool way of writing, if only because you end up with things that you couldn’t possibly contrive to do.”

How many bands can write a poignant piano ballad with the lyric “Baby alligators in the sewers grow up fast?” Maybe only one. Radiohead debuted “Fog” during a July 2000 show in Israel, with Yorke using a different, more on-the-nose rhythmic feel and occasionally struggling to find the right chords. The song only appeared during six more Radiohead shows (most recently in October 2008, followed two years later by an Atoms for Peace gig), but they wound up releasing two versions in — shocker! — wildly different arrangements. A muted, percussive, full-band “Fog” first came out as the B-side to Amnesiac’s “Knives Out”; and in 2003, a solo Yorke live take, under the name “Fog (Again),” landed on the B-side to Hail to the Thief track “Go to Sleep.” Who knows how many “Again”s are in the vault?

One of Radiohead’s most melodically beautiful songs inadvertently spawned one of their ugliest, most difficult detours: When Yorke recorded a demo of the ballad “True Love Waits” during the OK Computer era, he also planted the seeds for Amnesiac’s electronic freak-out “Pulk/Pull Revolving Doors.”

The “True Love Tape Loop,” released on the OKNOTOK cassette, is a kaleidoscope of piano and keyboard loops that sorta sounds like their future tour mates Sigur Ros. And you can faintly hear Yorke singing “True Love Waits” in the background — a disorienting middle ground between two opposite realms. Radiohead eventually revisited some of these loops and fragments during the Kid A/Amnesiac sessions, Yorke adding a pitch-corrected spoken vocal about various kinds of doors (“And there are trap doors that you can’t come back from”).

“[It] was me fucking around with Pro Tools for the first time!” the front man told Elektronauts. The “True Love Waits Version,” meanwhile, seems to suggest a more direct blend of elegance and chaos.

Radiohead obviously feel strongly about the string parts from this era — and with good reason: The woozy orchestrations of “Pyramid Song” add an otherworldly touch to one of the band’s all-time classics. The rhythmically stammering song — inspired by jazz legend Charles Mingus’ 1964 cut “Freedom” and an exhibition about Egyptian underworld mythology — underwent the usual studio surgery. (At one point, they even incorporated their own handclaps, a direct nod to “Freedom,” before erasing them.)

But they wound up satisfied relatively quickly: Four months after they debuted the track as “Egyptian Song” at the Tibetan Freedom Concert, O’Brien wrote, “Thom thinks it’s the best thing we’ve committed to tape, ever.” He later echoed that opinion to Rolling Stone, calling it “the best song we’ve recorded.”

“If You Say the Word”

Radiohead first previewed Kid A Mnesia with this long-coveted rarity, which O’Brien initially dubbed “C-Minor Song” (and later simply “Say the Word”) in his diary. No song was apparently a breeze to record, but the band struggled mightily here, eventually reworking it in what O’Brien called a “Stax stylee.” The guitarist documented Greenwood “attempting to put the vocal mic through his analogue filters,” creating “sudden bursts of unearthly noises, both extremely good and extremely bad.” At some point, though, Greenwood felt the piece was becoming “a little too tasteful and nice,” and O’Brien agreed, later noting he’d become “a bit anxious,” unable to realize the sound swirling around his head.

What were they thinking? With its subtle triplet fingerpicking, muted bass, spiderweb guitar lines, tick-tock drum groove and splashes of ondes martenot and glockenspiel, it’s a sensuous slow-burn. Radiohead might be the only band good enough to hoard away a track of this quality for two decades.

Listen to Radiohead’s ‘If You Say the Word’

“The Morning Bell” (In the Dark Version)”

Most of Radiohead’s alternate takes wound up on the cutting-room floor. But their enthusiasm over “Morning Bell” led to an unconventional decision: releasing separate versions on Kid A and Amnesiac (one recorded during a session in Copenhagen, Denmark; another during a stint at Batsford Park, an empty mansion in Gloucestershire, England).

They messed around a lot with “Morning Bell”: In his diary, O’Brien referred to Godrich’s “very nice” Pro Tools work on “some complete gibberish that [he] played.” But their two-versions plan wasn’t always set in stone — they only went that route after discovering the Amnesiac take later on. Asked about the approach by a fan on Radiohead’s Spin With a Grin site, Yorke replied, “because it came from such a different place from the other version. Because we only found it again by accident after having forgotten about it. Because it sounds like a recurring dream. It felt right.”

Radiohead fans are currently in the dark with this “In the Dark Version,” including the band’s decision to expand the title with a definite article. But it shouldn’t shock anyone that they have another alternate in the can.