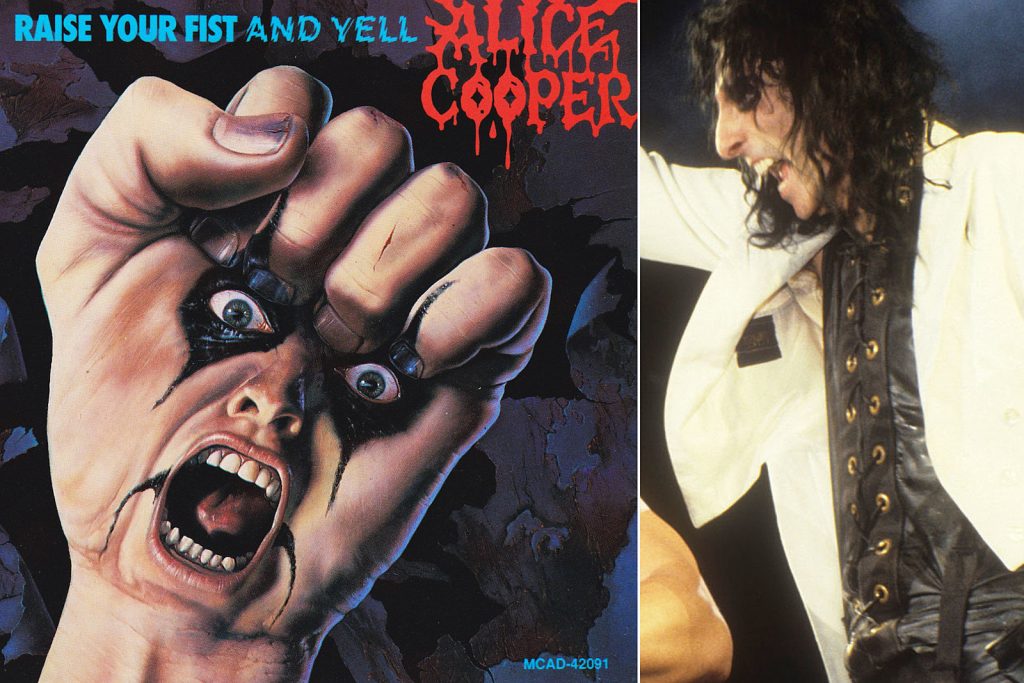 Alice Cooper wasn’t keen on squandering his new lease on life after roaring back with 1986’s Constrictor, and he quickly followed up the career-rejuvenating LP with Raise Your Fist and Yell, released on Sept. 29, 1987. Constrictor found the veteran shock-rocker emerging from a self-imposed music industry exile with newfound sobriety, clarity of purpose and a metallic edge that could contend with a fresh generation of big-haired Sunset Strip rockers.

Time might have quenched Cooper’s thirst for debauchery, but it did nothing to dull his righteous anger. Raise Your Fist‘s opening track, “Freedom,” aims at the Parents Music Resource Center, the committee co-founded by Tipper Gore in 1985 that published a “Filthy Fifteen” list of morally objectionable songs (including AC/DC, Motley Crue, Judas Priest, Twisted Sister, Black Sabbath and W.A.S.P.) and slapped Parental Advisory stickers on albums with explicit lyrics. “You want to rule us with an iron hand,” Cooper sneers on the track. “You change the lyrics and become Big Brother / This ain’t Russia, you ain’t my dad or mother!“

“I’ve never left behind that phase of my development during which I hated bigoted authority and fought against it, too,” Cooper told Metal Hammer in 1988. “I wrote the song ‘Freedom’ instead of a letter of complaint to let the PMRC and everyone they stand for know what I think about them. This group mustn’t be taken too seriously. Really, they are just four old ladies in Washington who try and get as much publicity as possible for their husbands, who are all influential politicians. Since the main man behind the PMRC, Albert Gore, has admitted himself that he used to smoke pot and listen to loud rock music when he was a kid, the movement won’t last long anyway.”

This spirit of youthful defiance pervades the other anthemic tracks on Raise Your Fist‘s first side, including “Lock Me Up” (I’m in for the kill / I’m back with a rage / I want them to write in the paper each night how I bloodied the stage!) and “Give the Radio Back” (You think I’m wasting all my precious time / You say my music oughta be a crime / Well, give the radio back … to the maniacs!) But it’s on the back half that Cooper indulges his other love: macabre, over-the-top horror.

“Prince of Darkness,” which initially appeared on the soundtrack to John Carpenter‘s 1987 supernatural horror film of the same name, kicks off Side 2 of Raise Your Fist and Yell with an evocative tale of a godless, blackhearted creature hell-bent on destroying humanity. “Time to Kill” and “Chop, Chop, Chop” leave little to the imagination with their pulpy, shock-metal titles and lyrics, which could easily describe any of the villains in flourishing slasher flick franchises such as Halloween, Friday the 13th or A Nightmare on Elm Street. But it’s the last two songs on Raise Your Fist and Yell — the ominous, keyboard-driven “Gail” and the morbid shred-fest “Roses on White Lace” — that show just how sharp Cooper’s songwriting still was.

“It’s kinda autobiographical,” Cooper told Kerrang! in 1987 while explaining the album-closing one-two punch. “This guy watches so many horror videos — that’s all he does — to the point where he doesn’t know if he’s in the videos or just watching. And for some reason, he keeps killing — but all his victims are called Gail, every one. He just keeps killing them, and he can’t discern between actors in the videos and real victims! And at the end, when he’s killed this girl in the song ‘Gail’, and he’s thinking about her bones in the ground and about how the bugs are inside her ribcage, and the dog is digging up the bones — he wonders how the dog remembers Gail.”

Then it hits him. “And he sees this wedding dress and it’s got bloodstains on it everywhere — but he doesn’t see the bloodstains, he sees roses!” Cooper exclaimed. “This guy’s a romantic, you know? He’s so crazy, he looks at this blood and all he sees are roses. ‘Roses on White Lace’ is this whole thing about him not knowing that it’s really blood. For him, he’s painted these lovely roses on this white dress. So he’s really a psycho.”

Cooper matched Raise Your Fist‘s lyrical grotesquerie with a smorgasbord of ghastly stunts on the accompanying Live in the Flesh tour, including chopping up prostitutes, beheading monsters and hanging himself on his infamous gallows. The production was so intense that the German government demanded that he remove sections of the show, including the disemboweling of a pregnant woman and the impaling of baby dolls on a sword after reports emerged from England of girls fainting in the audience. A failed crusade to ban the show outright in England was also launched — ironically, by blind politician David Blunkett.

As always, some critics derided Cooper’s stage antics as tasteless schlock, but the singer took a different view. “Alice takes it to the point where it’s not violence anymore, where it gets to be funny,” he told Kerrang! “It’s the same thing with horror movies. When I first saw Friday the 13th I went, ‘Hey, this is really violent, I hope people are going to be able to take this’. But after about the fourth one I started laughing at them and going, ‘This is really funny!'”

With hungry young rockers like Faster Pussycat and Guns N’ Roses in tow, Cooper’s Live in the Flesh tour proved he could still run with the pack. Unfortunately, it did little to help his album’s commercial prospects. Raise Your Fist and Yell conked out at No. 73 on the Billboard 200, and following the tour, all of its songs disappeared from his set lists until 2019, when “Roses on White Lace” made a comeback.

Still, despite being a minor entry in Cooper’s discography, Raise Your Fist and Yell served as an important stepping stone in the singer’s career. It proved his Constrictor success wasn’t a fluke and allowed him to take his live show to all-new heights — and it set the stage for his proper comeback album, 1989’s Top 20, platinum-selling Trash.