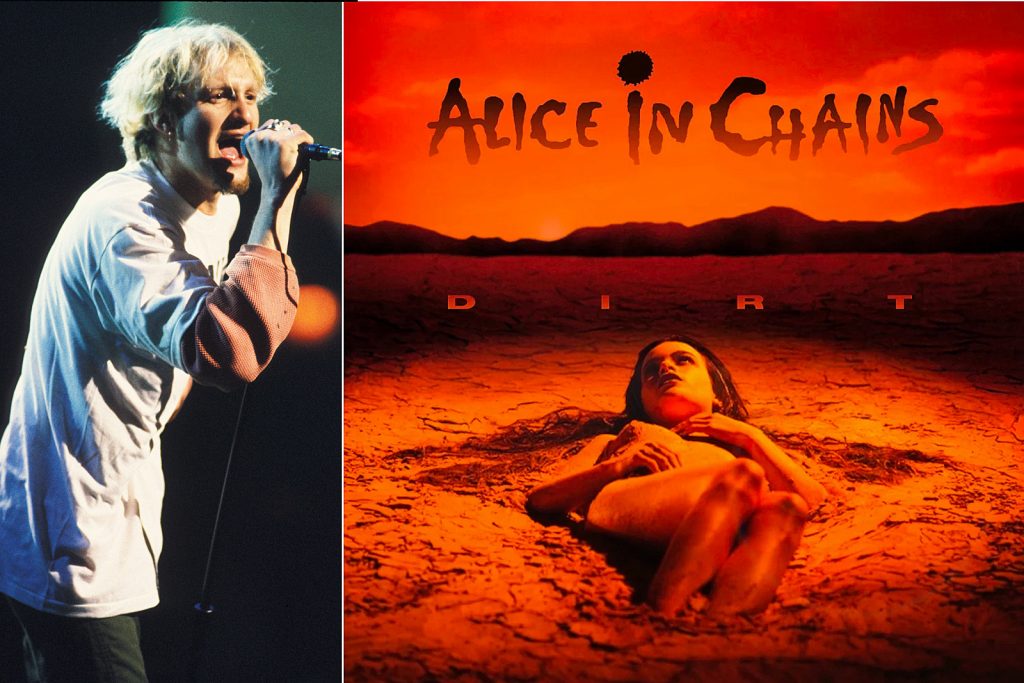 On paper, Alice in Chains had every reason to be a happy band when it began working on its sophomore full-length album.

The Seattle quartet had become one of rock’s hottest newcomers with its 1990 debut, Facelift. The slow-building set spawned a Grammy Award-nominated hit single in “Man in the Box,” was the first from the new Seattle “grunge” generation to be certified gold and put Alice in Chains on stage opening for Van Halen, Poison, Iggy Pop and others. Facelift would eventually go on to triple-platinum sales. Meanwhile, the band was featured in Cameron Crowe’s hit Seattle-based movie Singles, while their song “Would?” kicked off the film’s soundtrack album.

That success hardly seemed a harbinger for the dark opus that came in its wake — Dirt, a 13-track set that came out on Sept. 29, 1992 and vaulted Alive in Chains to status as one of the grunge scene’s own Big Four, along with Nirvana, Soundgarden and Pearl Jam.

Listen to ‘Would?’ by Alice in Chains

“It’s a dark album, but it’s not meant to be a bummer,” guitarist and principal songwriter Jerry Cantrell told RIP magazine in 1993. “Shit happens. That’s what it’s about. It’s a release for us. I’d hate for somebody to get the picture that I’m saying you’ve got to be bummed out all the time and go out and get fucked up. I’m not telling anybody to do anything. That’s not what the album is about at all, and that’s not what we’re about.

“There’s a lot of fiction and symbolism involved on the record, but there’s a heavy grain of truth.”

Cantrell was also quick to dismiss the notion that success led to happiness for his and his bandmates. “There’s a whole lot more to it than I expected,” he told RIP. “We bit off a big chunk, but we’re chewing it up and spitting it out.”

There was certainly some heaviness on Facelift and Alice in Chain’s subsequent Sap EP, released early in 1992. But those did not fully prepare the group’s fans or the rock audience in general for the angst and emotional turmoil that would populate Dirt — from the leadoff track “Them Bones,” Cantrell’s semi-sarcastic rumination on death, to the closing “Would?,” which was inspired by the death of Mother Love Bone‘s Andrew Wood. In between were ruminations about drugs (“Sickman,” “God Smack,” “Junkhead”), family turmoil (Cantrell’s heart-wringing “Rooster”) and in “Dam That River,” the recounting of a fight between Cantrell and drummer Sean Kinney some years earlier.

Listen to ‘Rooster’ by Alice in Chains

Frontman Layne Staley notably stepped up to write two tracks, “Hate to Feel” and “Angry Chair,” by himself — on which he also played guitar — while collaborating with Cantrell on five others. Slayer‘s Tom Araya, meanwhile, co-wrote and performed guest vocals on “Intro (Dream Sequence)/Iron Gland.” Facelift producer Dave Jerden was back again for Dirt, which was recorded in Seattle and Los Angeles — the latter while riots were taking place following the controversial acquittal of four police officers charged with assaulting a black motorist, Rodney King.

“That was the album where we just laid everything out,” Kinney recalled in the liner notes for the box set Music Bank. “It’s all there, no holding back, no hiding, it’s a bare and honest look at what we’d experienced.”

There was certainly a market for that intensity. Dirt received widespread critical acclaim — which continues to this day — and hit No. 6 on the Billboard 200 on the way to five-times platinum sales and another Grammy nomination, for Best Hard Rock Performance with Vocal. It also spawned five singles, four of which — “Would?,” “Them Bones,” “Rooster” and “Down in a Hole” — went platinum or better.

Listen to ‘Down in a Hole’ by Alice in Chains

In the book accompanying Dirt‘s 30th anniversary deluxe box set, Slipknot‘s Corey Taylor attests that Dirt “is just a prefect album. Simply put, it’s one of the greatest hard rock/heavy metal albums of all time. It transcends genres. It speaks to people regardless of age or generation. It’s literally a clinic on how to make nihilism and contemplating work together… They showed me that you would write/marry the heavy to be beautiful and combine the sadistic with the hopeful.”

Alice in Chain’s members were ambivalent about that legacy, however. Staley, who had resumed using heroin while making the album after a stay in rehab, told M.E.A.T. after Dirt‘s release that the album was “the whole story of the last three years of my life.” But three years later he expressed to Rolling Stone that, “I wrote about drugs, and I didn’t think I was being unsafe or careless writing about them… I didn’t want my fans to think that heroin was cool. But then I’ve had fans come up to me and give me the thumbs up, telling me they’re high. That’s exactly what I didn’t want to happen.”

Cantrell, meanwhile, told The Skinny in 2013 that, “The darkness was always part of the band, but it wasn’t ALL about that. There was always optimism, even in the darkest shit we wrote. With Dirt, it’s not like we were saying ‘Oh yeah, this is a good thing.’ It was more of a warning than anything else, rather than, ‘Hey, come and check this out, it’s great!’ We were talking about what was going on at the time, but within that there was always a survivor element — a kind of triumph over the dark elements of being a human being. I still think we have all of that intact, but maybe the percentage has shifted.”

Alice in Chains followed Dirt with a self-titled effort in 1995 that was its first and only No. 1 on the Billboard 200 (Dirt remains the band’s best-seller, however). But Staley would never regain equilibrium, going in and out of drug addiction until his death in April of 2002 at the age of 35 from an accidental overdose. Alice in Chains would regroup three years later with William DuVall joining Cantrell, Kenney and Inez, releasing three more studio albums and continuing to tour.