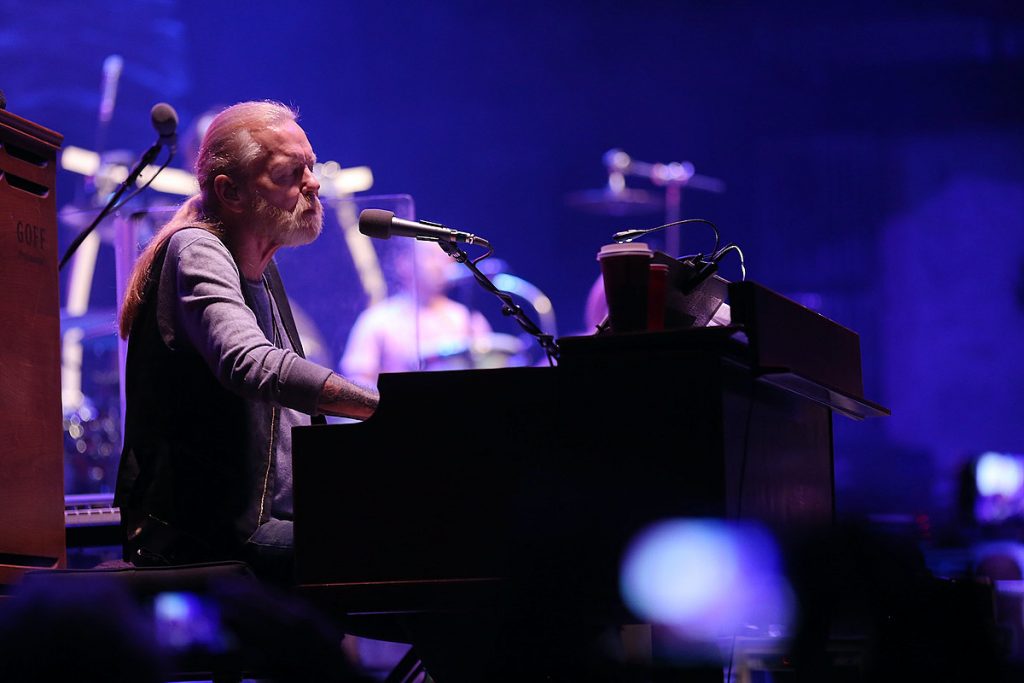 The final Allman Brothers Band concert was followed by seasons of loss.

Gregg Allman‘s bout with bronchitis forced a short postponement during their career-ending run of shows at their home base, New York’s Beacon Theatre, which concluded with a 238th sellout on Oct. 28, 2014. Unfortunately, that was a sign of devastating health issues to come.

Five years after the stage lights dimmed following this triple-set concert, Dickey Betts and Jai Johanny “Jaimoe” Johanson were the only remaining original members — and Jaimoe was the only one still touring. The drummer originally formed Jaimoe’s Jasssz Band as an offshoot project during breaks in the Allman Brothers Band schedule.

Betts had long since left the lineup, departing in 2000 after tangling with Gregg Allman. The group rebuilt around the twin guitars of Warren Haynes and Derek Trucks, nephew of co-founding drummer Butch Trucks, but many held out hope for a reunion that never occurred.

Derek Trucks said there was talk of bringing back Betts as part of the Beacon shows, “right up to rehearsal, even during the show week” – but the details couldn’t be worked out. “It’s too much history to wrap up in showing up and playing a set,” he told Rolling Stone in 2014. I know he should have been there. But it was like, ‘If no one’s jumping on it, it wasn’t meant to happen.'”

Butch Trucks came up with the idea of ending this final performance with the first song the Allman Brothers Band ever played together, Muddy Waters’ “Trouble No More.” They began with a long medley tracing back to their founding by Gregg’s sibling, the late Duane Allman.

“It is a little bittersweet,” Haynes told UCR a few weeks later. “It’s a very emotional time right now, because it was such a huge part of my life. Especially when I was in the band, but even prior to that. That music means more to me than anyone could imagine. Being on the inside of it and helping keep it alive was an unbelievable experience.”

After the Allman Brothers Band stopped, Butch Trucks initially concentrated on work with the Freight Train Band. He also led the Les Brers project, which featured some group alumni, and spearheaded various Allmans-related super-jams before dying by suicide in January 2017. “I’m heartbroken,” Gregg Allman said back then. “I’ve lost another brother and it hurts beyond words.”

A few months later, Gregg Allman was gone too. He’d fought off cancer, undergoing a liver transplant in 2010, and dealt with a broken wrist, atrial fibrillation, a tough case of pneumonia and bulging discs. He also re-entered rehab in 2012. At that point, the Allman Brothers Band were firmly focused on the road, having become sold-out staples at the Beacon Theatre. Allman always found a way to bounce back. His liver cancer returned, however, while he was in the midst of recording a solo album that would be posthumously released as Southern Blood in 2017.

Johnny Sandlin, an early Allman Brothers Band musical collaborator who later produced their multi-platinum Brothers and Sisters album, died in September of that year, after his own battle with cancer. A couple months later, Betts abruptly retired from the music business, then un-retired the following spring.

Betts was off the road again by August 2018, however, after suffering what was believed to be a mild stroke. He slipped and fell at home a month later, and underwent successful brain surgery. Betts released a live album in 2019, titled Ramblin’ Man Live at the St. George Theatre, but hasn’t yet returned to the stage again.

Betts, who helped lead the Allman Brothers Band past the tragedy of losing Duane Allman, remained indefatigable. “I don’t count my band completely out,” he told the Sarasota Herald-Tribune in March 2019.

Duane Allman was actually the first of two consecutive members lost to a motorcycle accident in the early ’70s. Original bassist Berry Oakley died in eerily similar circumstances around a year later.

Plans were announced in 2018 to update and improve their final resting places at the Rose Hill Cemetery in Macon, Ga. By then, Devon Allman and Duane Betts, sons of Gregg and Dickey, had formed a band together with Berry Oakley Jr., then began touring as the Allman Betts Band.

The modern-era lineup left little in the way of studio recordings; their most recent album together had been 2003’s Hittin’ the Note. Gregg Allman ended up releasing his first solo project since 1997, notching a No. 5 roots-focused record with 2011’s Low Country Blues.

Frustrated, both Haynes and Derek Trucks announced they were leaving in the months before the final Beacon run, and Gregg decided to close up shop. Haynes and Trucks have since focused on Gov’t Mule and the Tedeschi Trucks Band, respectively.

Haynes openly wondered why the group didn’t hold a larger public gathering to commemorate their retirement, perhaps something on the scale of the Grateful Dead‘s celebrated Fare Thee Well shows in Chicago. “I think we should have made more out of our last year,” Haynes told UCR in 2015. “And I think in hindsight everybody probably thinks that.”

Instead, fans were left with a smaller, though no less emotional, memory at a New York City cathedral to the Allmans’ history: Derek performed with Duane’s 1957 Goldtop Les Paul, and the final notes were played in the early hours of Oct. 29 – the day Duane Allman died in 1971. (You can see the set list below.)

The Allman Brothers Band’s three remaining original members – Gregg, Jaimoe and Butch – gathered as one just before the last song of the encore that night at the Beacon Theatre. “Never did I have any idea it would come to this,” Gregg Allman said, finally. “We give you a heartfelt thank you.”