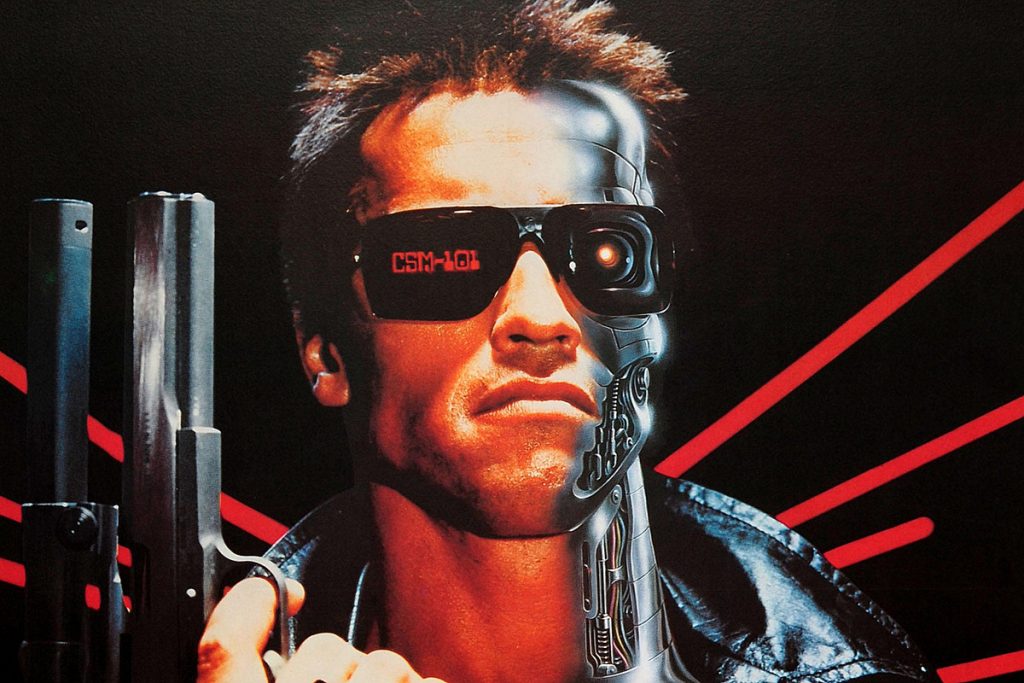 With his second film, The Terminator, James Cameron established himself as perhaps the premiere action director of his generation. Released on Oct. 26, 1984, the movie also radically changed the career trajectory of Arnold Schwarzenegger, turning him from a muscle-bound meathead with an Austrian accent into a cinematic icon.

Cameron reportedly wrote the script’s first draft following a dream in which a mechanical monstrosity pursued him across his kitchen floor. At first, the director struggled to draw interest in the film, possibly due to the fact that his only other feature film was the low-budget flop Piranha II: The Spawning. But he’s nothing if not a man who accomplishes what he sets his mind to. Case in point, in 2012, driven by his fascination for the undersea world, he became only the second human being to pilot a submersible into the Pacific Ocean’s Challenger Deep, the deepest known spot on Earth.

Given this inherent determination, finding financing and actors for a film about a robot sent back in time to kill the mother of a future resistance leader may not have presented much of a challenge. Cameron pitched the project by having actor Lance Henrickson (whom he would later cast as a cop in The Terminator) dress up like a Terminator and precede him into a producer’s office. He also managed to nab Schwarzenegger, who was initially disdainful of the project, thinking that it was his role as Conan the Barbarian that would make him a huge star.

After Schwarzenegger signed on, Cameron refined his script until it was a tight, straight-line chase narrative and put together the rest of a pitch-perfect cast. This included Michael Biehn and Linda Hamilton, whose role as Sarah Connor would become equally as iconic as Schwarzenegger’s. As if to confirm his eye for spotting talent, Cameron also cast Bill Paxton, Rick Rossovitch, Brian Thompson and Paul Winfield in various smaller roles.

The result is an immensely entertaining film. For the first 15 minutes or so, the audience has no idea of the stakes involved. Two men, or what we think are men, appear in the streets of Los Angeles, naked, and begin to look for Sarah Connor. Slowly we realized that one, Schwarzenegger’s Terminator, is trying to kill her while the other, a solider from the future named Reese (Biehn), is trying to save her.

But how do you stop a futuristic cyborg with only the weapons of the present? Reese and Connor alternatively try to run away, and figure out ways to destroy the Terminator, including throwing pipe bombs at him and blowing up the gas tanker truck he’s driving. None of it works. Eventually, the Terminator is reduced to nothing more than his metal frame. After that, he’s brought down to simply a metal torso with arms. And yet still he drags himself after the wounded Connor (and thus fulfilling, at the end of the film, the dream Cameron had that initiated the project.)

In the end, it is only Connor’s determination that saves her. Through the course of the film, we watch her grow from an ordinary young woman working as a waitress to a steely heroine who knows she’s destined to give birth to, and then train, the man who will save humanity. In this way, the film makes a surprisingly strong feminist statement. Several years later, with Aliens, Cameron would explore this same arc with Sigourney Weaver‘s character Ripley, who goes from uncertain participant in a space exploration to a badass who takes on the queen alien with guns, grenade launchers and, ultimately, a metal exoskeleton.

But the most iconic element of The Terminator is Schwarzenegger’s titular character. What the industry had considered to be limitations up until then – his ridiculously sized muscles, blunt facial features, accent and rudimentary acting skills – became in a single movie a set of tropes that he could play with, and off of in a humorous way, for the rest of his cinematic life.

His most famous line from a career full of them — “I’ll be back” — comes from this film. He returns by smashing a car into the police station and then parading through it with a long gun in each hand, killing every cop he sees. And it was a line that almost never existed – in a 2012 interview, he noted that at the time of filming he still had trouble pronouncing “I’ll” in English and suggested to Cameron that the line might be better as “I will be back.” It would not have been.

Beyond this line, though, there is a menace in the Terminator character that’s so striking it might almost be a swagger. “It can’t be reasoned with, it can’t be bargained with. It doesn’t feel pity or remorse or fear and it absolutely will not stop,” the character Reese aptly says of the cyborg. But at the heart of this unstoppable force lies an almost arrogant disdain for, and even amusement with, the puny humans it must kill. This hubris makes the Terminator something more than a machine, and it allows Schwarzenegger a subtlety in exploring the character’s depth.

The ability to project this feeling of sly implacability has served Schwarzenegger well in later life, both as an actor and as a public figure who was elected as the governor of California. After The Terminator it always felt like there was something inevitable about his longevity. And Reese’s assessment that it “absolutely will not stop,” serves as a nice summation not only of Schwarzenegger’s career, but Cameron’s too, as well as the franchise he started.