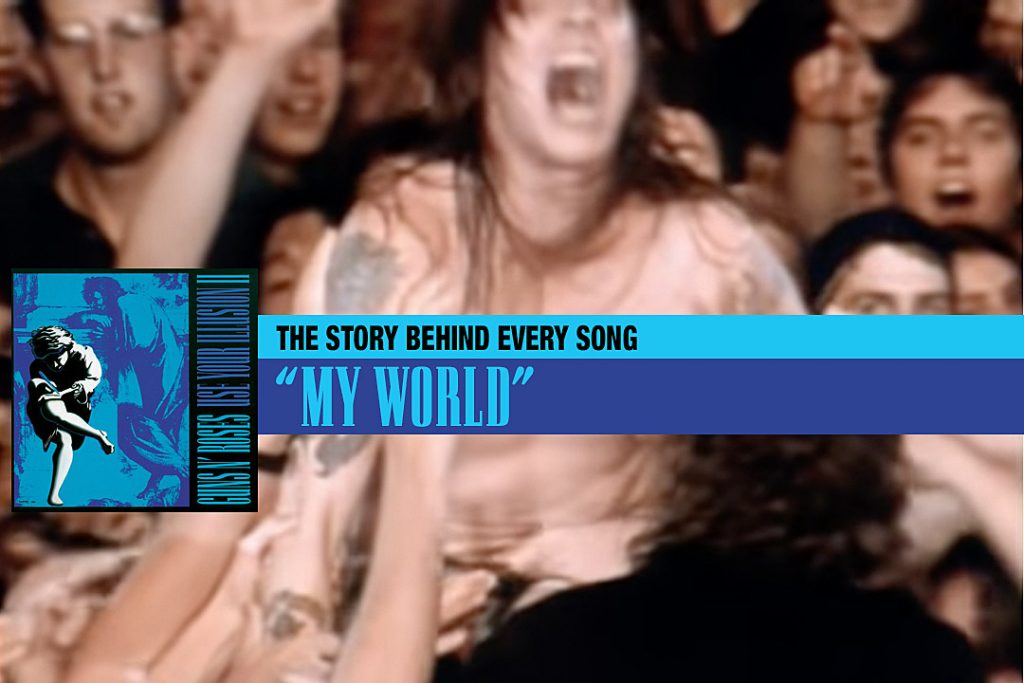 It took less than 90 seconds for Axl Rose to draw a sharp line between Guns N’ Roses‘ past and future on Use Your Illusion II‘s closing track, “My World.”

The song, which broke from the band’s established hard-rock sound to explore industrial and electronic styles, also managed to anger a soon-to-be-former bandmate.

“There was one song on that record that I didn’t even know was on it until it came out, ‘My World,'” guitarist Izzy Stradlin told Rolling Stone in 1992. “I gave it a listen and thought, ‘What the fuck is this?'”

The incident helped hasten the guitarist’s departure from the group: He quit two months after the Illusion albums were released. “Axl made it clear that he was going to do things his way, and there was no space for debate,” Stradlin noted. “So I had to make it clear to everybody that this was the end of the line for me.”

“Axl was well-versed in what was new and happening,” Guns N’ Roses drummer Matt Sorum explained in a 1999 Spin feature (via Guns N’ Roses Central.) “He was the first to play me Nine Inch Nails. He said, ‘They’re going to be huge.'” “He was there when the rest of us were still listening to Judas Priest,” Metallica drummer Lars Ulrich noted in the same article. “We were all sitting there going, ‘What the fuck are you talking about?'”

Stradlin’s replacement, Gilby Clarke, told Spin it didn’t take long for the idea of updating Guns N’ Roses’ approach to take root in Rose’s mind: “Basically, Axl said, ‘I want to change the sound of the band. I want to use more industrial type things.”

“‘My World'” happened when were were sitting around being a bit bored,” Rose told Musician in 1992. “I’d been listening to a lot of industrial music, and all of a sudden I said, ‘Hey, man, let’s do something. Let’s just make it short and sweet, and see what we come up with.’ In three hours we wrote and recorded the song.”

When asked about future recording plans by Rip in November 1992 (via HereTodayGoneToHell), Rose made it clear that “My World” wasn’t just a one-off experiment. “I’d like to see if we could add anything to GNR, possibly bring in a new element that hasn’t been there before,” he said. “There was a certain focus we all wanted to keep for Illusion I and II, but when I did ‘My World,’ everyone dug it and wanted it on the record. By the next record I think we can branch out a lot further.”

It would be eight more years before Guns N’ Roses, with Rose now the sole remaining founding member, released an original new song. “Oh My God,” from 1999’s End of Days soundtrack, goes even deeper into the industrial and electronic experimentation of “My World.” Similar elements can be heard in varying doses throughout Chinese Democracy, 2008’s long-awaited follow-up to the Illusion albums of original material.