Beatles’ Dashed-Off ‘She Loves You’ Was Actually Carefully Made 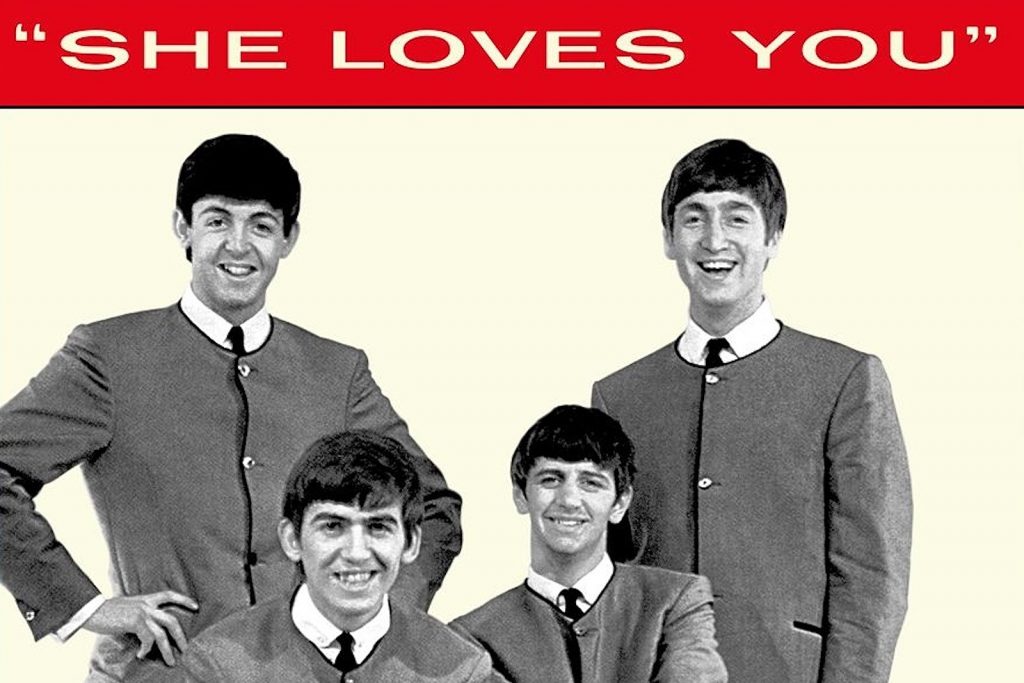 In fact, they took weeks constructing this song, and “She Loves You” didn’t hit in the U.S. – finally detonating Beatlemania – until well after its stateside release on Sept. 16.

Paul McCartney and John Lennon fine tuned “She Loves You” during downtime between opening gigs for Roy Orbison in May and June 1963. McCartney wanted to do a call-and-response song, in the style of Bobby Rydell’s then-current hit “Forget Him,” but Lennon pushed him toward something more original.

At this point, they were already huge stars in their native U.K. and that had an isolating effect on their writing partnership as the Beatles were shielded from hoards of screeching fans. “She Loves You” was better for it.

Given time, they landed on a hook that became an early signature for the band: “Yeah, yeah, yeah.” Lennon later downplayed the phrase, describing it in throwaway terms.

“There have been lots of ‘oh yeah’ and ‘yeah’ and ‘uh-huhs’ in rock ‘n’ roll,” he says in David Sheff’s All We Are Saying. “Lonnie Donegan always did it. He was a Britisher who had done a lot of American folk music, and I remember Elvis [Presley] did that in ‘All Shook Up.’ But I can’t remember who we got the ‘yeah, yeah, yeah’ from for sure.”

They’d all but finished the track by then. “We’d written the song, and we needed more,” Lennon later mused, “so we had ‘yeah, yeah, yeah,’ and it caught on.”

Listen to the Beatles’ ‘She Loves You’

McCartney’s father, himself a working musician, was less than thrilled about their slang usage.

“We played it to my dad and he said, ‘That’s very nice, son, but there’s enough of these Americanisms around. Couldn’t you sing, “She loves you, yes! yes! yes!”‘ McCartney told Barry Miles in Many Years From Now. “At which point we collapsed in a heap and said, ‘No, Dad, you don’t quite get it!'”

By June, as Lennon and McCartney gathered at a Newcastle hotel, they were ready to put it all together as a finished composition.

“I suppose the most interesting thing about it was that it was a message song. It was someone bringing a message,” McCartney says in Many Years From Now. “It wasn’t us any more. It was moving off the ‘I love you, girl’ or ‘love me do.’ It was a third person, which was a shift away. ‘I saw her, and she said to me, to tell you, that she loves you,’ so there’s a little distance we managed to put in it, which was quite interesting.”

That’s where the first legend – that the Beatles dashed off one of their most recognizable songs in a single furious writing session – was born. But “it was never,” McCartney later argued, “an overnight success.”

Not as a composition, and certainly not as a single.

The Beatles spent an impressive five hours recording “She Loves You” and its eventual B-side, “I’ll Get You,” at Abbey Road, less than a week after writing was completed. They’d continue pushing boundaries but with the same eye for careful detail.

Listen to the Beatles’ ‘I’ll Get You’

Ringo Starr kicks things off with a surprising, characteristically disordered fill, almost as if the band started playing the song before recording started. Then they switch up things by belting out the single’s key phrase (“she loves you, yeah, yeah, yeah“), rather than beginning with a verse.

Everyone was particularly proud of the song’s ending, which was George Harrison‘s idea. Producer George Martin said the chord was previously unknown to the Beatles.

“I was sitting in my usual place on a high stool in Studio 2 when John and Paul first ran through the songs, George joining in on the choruses,” Martin told Beatles historian Mark Lewisohn. “I thought it was great but was intrigued by the final chord, an odd sort of major sixth, with George doing the sixth and John and Paul the third and fifths – like a Glenn Miller arrangement. They were saying, ‘It’s a great chord! Nobody’s ever heard it before!’ Of course, I knew that wasn’t quite true.”

Martin had initially tried to persuade them to abandon the ending, apparently describing it as “too like the Andrew Sisters.” The Beatles even tried a disappointing take or two without the chord, McCartney later remembered. “He would often give us parameters, like, ‘You mustn’t double a 3rd,’ or ‘It’s corny to end with a 6th, and a 7th is even cornier,'” McCartney said in the Beatles’ Anthology. “We’d say, ‘We like it, man. It’s bluesy.’ It was good that we could override a lot of his so-called professional decisions with our innocence. If anyone now asks, ‘What is the sign of a great songwriter?’ I say, ‘If the songs sound good.’ So, we never listened to any rules.”

In the end, what drove them to such recording heights may just have been old-fashioned desire – and not just for chart success.

Listen to a 1963 Live Performance of ‘She Loves You’

Engineer Geoff Emerick said the day began with removing dozens of teenage fans who invaded the studios in hopes of catching a glimpse of the Beatles. One particularly aggressive young woman had to be tackled by roadie Mal Evans, then escorted out. Finally, local police were called as the “barbarians stormed the walls,” Lennon subsequently joked.

“The huge crowd of girls that had gathered outside broke through the front door,” Emerick wrote in Here, There and Everywhere. “Scores of hysterical, screaming girls [were] racing down the corridors, being chased by a handful of out-of-breath, beleaguered London bobbies.”

Rather than being startled by the disruption, the Beatles seemed emboldened. “She Loves You” crackles with a nervy sexuality. “[The chaos] helped spark a new level of energy in the group’s playing,” Emerick added.

The single soared to the top of the U.K. charts after its August release there, remaining at No. 1 from September through December 1963. But Capitol – EMI’s counterpart in the United States – refused to release it. Vee Jay, the small label that had previously issued “Please Please Me” and “From Me to You” to little notice – politely declined, as well.

Manager Brian Epstein finally convinced the Philadelphia-based Swan Records to take a chance on “She Loves You,” but radio stations stayed away in droves. It took a bit of footage of the Beatles performing the song, leased by NBC’s Jack Paar show that November from a recent BBC documentary called The Mersey Sound, to finally draw stateside notice. CBS also ran a news story.

The Beatles suddenly had a hit – but not with “She Loves You.” Capitol Records rushed out “I Want to Hold Your Hand” to store shelves and it went to No. 1 in January 1964, sparking the so-called British Invasion of the American charts. Record buyers finally found “She Loves You,” and the single spent four weeks at No. 2 behind “I Want to Hold You Hand,” before finally replacing it atop the charts. By then it was March 1964.

From the cheery ‘Please Please Me’ to the kinda dreary ‘Let It Be,’ we rank all of the group’s studio LPs.