Behind the Scenes at the Doobie Brothers’ Reunion Photo Shoot 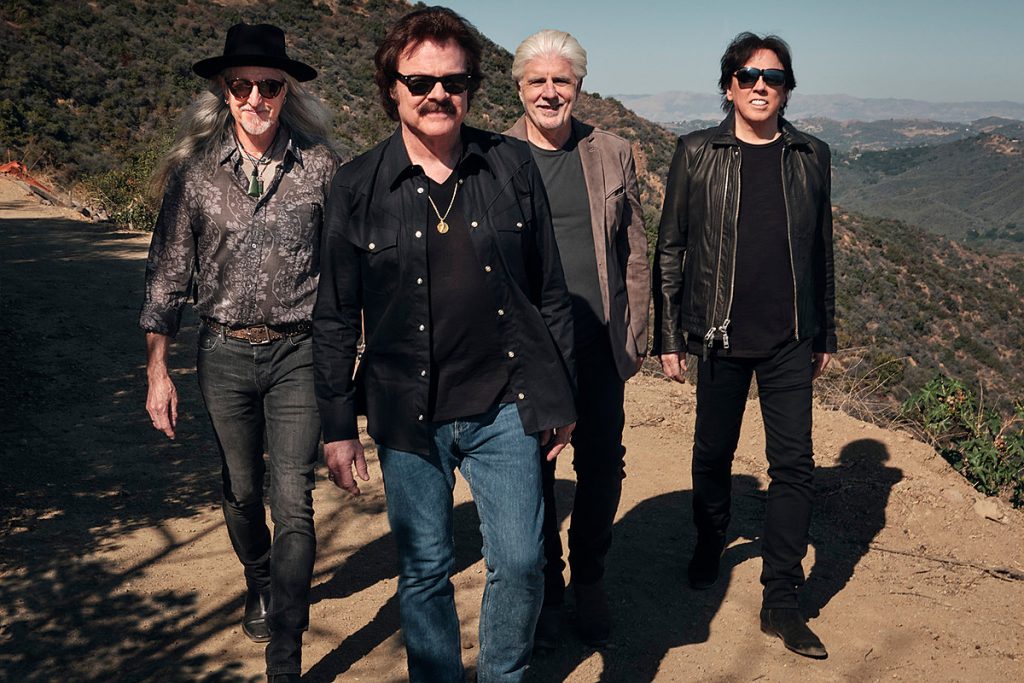 A large black van pulls into the dusty staging area high in the mountains above the Santa Monica Bay. It’s early on a warm, sunny November morning. Off in the distance, some of California’s recent fires are still burning, but up here all is clear and calm.

Moments later, another vehicle grinds to a halt up here in the oak-studded grove. Out ambles the silver-haired, golden-throated vocalist Michael McDonald. His career, for all intents and purposes, was truly launched when he joined in 1975 after Johnston went down with some serious health issues. McDonald was with the band until they went on hiatus in the early ’80s; Johnston’s return later in the decade jump started the Doobie Brothers again.

Gentle and quiet in demeanor, McDonald greets his former cohorts, and there are warm exchanges all around the craft-services table. Soon after, with the old friends still getting re-acquainted, they all hop into a vehicle together for a white-knuckle climb up a narrow goat path to the top of the mountain. Nervous jokes are made as everyone tries to enjoy the startlingly beautiful views of the blue Pacific and rolling, emerald-green mountains.

In about 10 minutes, they reach their destination, the Moonfire Ranch. Built in the mid ’60s, the rambling compound perched on this mountainside features a rustic redwood house, a geodesic dome, and the sacred Moon Fire Temple – where everyone from Jim Morrison to George Harrison to Andy Warhol once hung out. It’s the perfect setting for an all-day photo shoot as the band readies the announcement of their first reunion tour with McDonald since 1995.

Wandering the wild, sprawling grounds as the photographer finishes setting up, the Doobie Brothers share old memories and new thoughts on the 2020 tour. McDonald, for all of his musical achievements both with the Doobies and as a solo artist, remains humble to the point where he almost sounds like a fan who has simply stumbled into the proceedings.

“I always loved this band,” McDonald says. “What Pat and Tom did early on, in terms of writing and performance, were the absolute highest standards. I was playing in a bar band when I first got the word they needed some help. We were actually playing some Doobie Brothers songs. If they didn’t give me that opportunity back then, we’d probably not be talking here today. It’s just that simple.”

Simmons, lanky and laid back as ever, simply shrugs when he thinks about that mid-tour moment in 1975 when Johnston was unable to stay on the road and McDonald was brought in. “Jeff Baxter had played with Michael in Steely Dan and thought he could at least help out.” Simmons pauses and adds with a laugh, “then he played ‘Takin’ It to the Streets‘ for us and we knew he had a future.”

He then explains why the Doobies have been so durable: “We just always kept an open mind and didn’t have too many rules,” Simmons says. “If someone wanted to try something, if it helped the music, we did it. Whatever made us a better band, that’s what it was all about – and if you look at the number of guys that have played in this band, I think you’ll see what I mean. We were always open to just about anything – as long as it made things better.”

Like other stalwart homegrown bands including the Grateful Dead, the Band and the Allman Brothers, the Doobie Brothers were always pushing the boundaries of American music. Inspired by the legendary ’60s Bay area band Moby Grape, who were mentioned by each member more than once on this day, the Doobies became early proponents of the two-drummer system. Live shows often featured wildly expansive jams, attracting the likes of Pete Townsend and Elton John (among others) to get up and join in.

Watch the Doobie Brothers Perform ‘What a Fool Believes’

The Doobie Brothers also reflected diversity early on, a rarity back in the early ’70s, with African-American bassist/vocalist Tiran Porter positioned onstage right in the front line with Simmons and Johnston. They weren’t making a statement; they were just doing what felt right.

“Man, we never thought things through or planned too much,” chuckles Johnston, whose soaring riffs and gritty vocals on radio-ready classics like “China Grove,” “Long Train Runnin’” and “Listen to the Music” helped solidify the band’s success. “We were just playing rock and roll with the best guys we could find. That’s all we cared about,” he adds. “Honestly, we still approach it the same way today. Put together a great-sounding band, then just go out and give the people what they paid for. Give ‘em a hell of a show.”

Despite the differences in style from McDonald, Johnston is looking forward to sharing the lead vocals. “Mike’s a massive talent. His songs are much different than mine,” Johnston concedes, “but I think fans are really going to love the blend on this tour. They’ll get every era of this band over the course of 50 years, lots of hits and as always, some deeper things too.”

Next year, the Doobie Brothers will be releasing new music, produced by six-time Grammy nominee John Shanks. This year, for the very first time, they are on the Rock & Roll Hall of Fame ballot. “It’s nice to finally be recognized, but we’ll just keep doing what we do no matter what,” Simmons says, matter-of-factly. “We’re a band. And right now we’re a band that’s really excited to be touring next year with an old pal of ours. That’s the focus now, just getting a great show together.”

McDonald offered his own take on the nomination: “I’ve always felt like the Doobies, since their inception, really earned their place in the Rock & Roll Hall of Fame, if anyone did, you now? And of course, they have a long history of hits and iconic songs before I joined them. Probably the hardest duty they did was prior to me joining. Things were a lot more luxurious by the time I got in the band. They guys that really paid the dues were Tommy and Pat and the early configuration of the band.”

Someone calls out from the house. The photographer is ready for the guys to assemble. Johnston, in his trademark black leather jacket and dark shades, takes a moment to stare out at the vast blue horizon before heading up the hill. “Hall of fame nomination,” he says, grinning. “This new music we are so excited about. A big 50th anniversary tour. I’m telling you, man: 2020 could be one hell of a year for the Doobie Brothers. One hell of a year.”