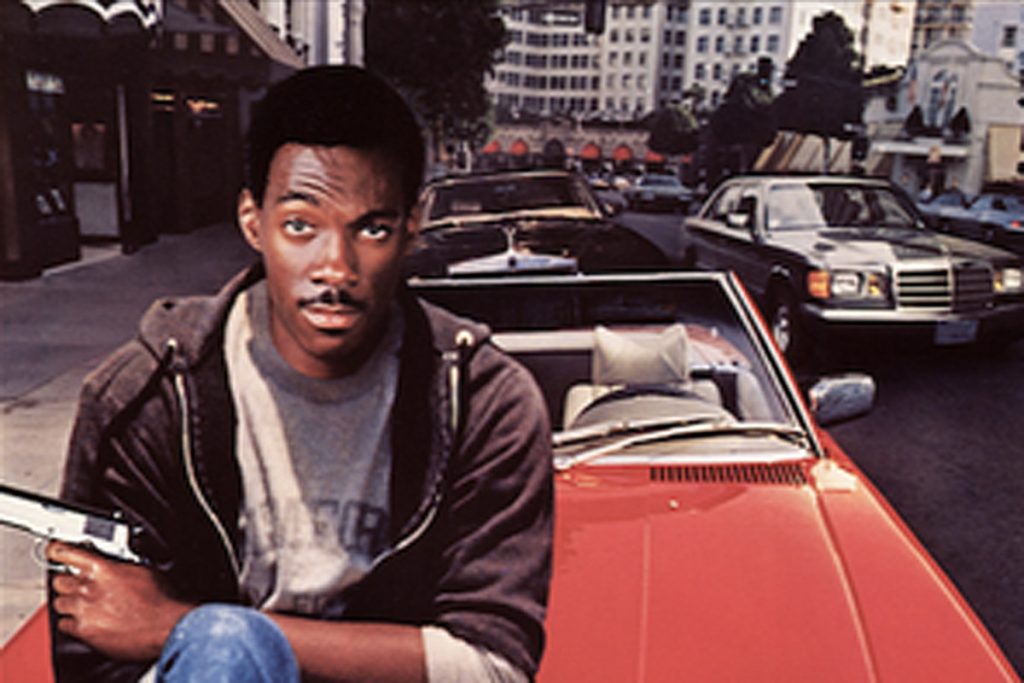 Released Dec. 1, 1984, Beverly Hills Cop was the most successful movie of Eddie Murphy‘s career and almost certainly the best.

It’s also not too much to say that it represents a high point of a certain kind of cinematic culture that would mostly disappear from the screen after the ’80s. It was a time when California was crazy and blue-collar cops could save us from the predations of the wealthy, when filmmakers didn’t have to hit you over the head with their social messages but could sneak them in with a wink and a smile.

In typical Hollywood fashion there are any number of people who have taken credit for the idea for the movie. But a New York Times article from 1984 says that then-Paramount president Michael Eisner came up with the idea in 1975 after getting stopped for speeding. When Dan Petrie Jr.’s script was finally approved, producer Don Simpson, who would later claim it was his idea, came close to getting Mickey Rourke and Sylvester Stallone to star in the film.

When Stallone dropped out, Murphy was quickly brought in, with Martin Brest directing. It was Murphy’s fourth feature movie role, and the one that re-established him as a superstar after the failure of Best Defense. For Brest it was a high point in a remarkable career which included other classics like Midnight Run (1988) and Scent of a Woman (1992), and which would be brought to a screaming halt with the epochal and not entirely deserved failure of Gigli (2003).

Murphy plays Axel Foley, a streetwise young cop from Detroit whose best friend Mikey is murdered by two thugs with connections to Los Angeles. Although his sergeant warns him on pain of losing his job not to try to investigate the murder, Foley packs up a ratty old duffel bag and hops into his beat-up blue Chevy Nova for the journey to Beverly Hills.

What follows is a classic fish-out-of-water tale, half-slapstick comedy and half-action movie, that beneath its surface suggests a searing assault on the lives of the rich and fabulous. For Foley, Beverly Hills might as well be Mars. The people dress in ridiculous ways, spend obscene amounts of money on meaningless art and generally seem to have lost what common sense God gave them.

He looks up his old high school friend Jenny (Lisa Eilbacher) who works in a high-end art gallery alongside a requisite ’80s L.A. artsy weirdo named Serge (a scene-stealing Bronson Pinchot). Their boss is the immediately suspicious Victor Maitland (Steven Berkoff), for whom the slain Mikey also worked.

In his inimitable way, Foley bluffs his way into a suite at a Beverly Hills hotel by pretending to be a reporter on assignment to interview Michael Jackson and starts to investigate Maitland. This gets him thrown through a window by Maitland’s goons, and brings him to the attention of the Beverly Hills police department in the persons of Sergeant Taggart and Detective Rosewood, played with gusto by John Ashton and Judge Reinhold. These by-the-book cops are given the task of keeping up with Foley, a task he complicates by sending them room service from his hotel when they’re staking him out and then disabling their car by stuffing bananas up the tailpipe.

These shenanigans are given a more action-movie turn when Foley discovers that Victor Maitland is indeed smuggling drugs into the county under his guise as an art dealer. Despite their better intentions, Taggart and Rosewood become involved in Foley’s investigation, and when Maitland kidnaps Jenny, the three burgeoning buddies lay siege to his mansion to rescue her.

It’s a tribute to both the much-worked script (which was nominated for an Oscar) and Brest’s skills as a director that there is not a single off-note sequence in the film. The opening chase, in which Foley gets thrown around in the back of a semi carrying black market cigarettes as it flees from the cops in Detroit, and the final shootout are both impeccably filmed and edited. The comedic bits throughout are uniformly well-imagined and executed. The film moves with pace and charm, giving us one memorable scene after another.

Although at times it seems like he has only two expressions – a grin and scowl that’s still almost a grin – Murphy has more than enough charisma to carry the leading role. But it’s the talented character actors surrounding him that really elevate the film. From Paul Reiser’s brief appearance in the early moments – “This is not my locker!” – to Bronson Pinchot’s espresso-making Serge – “Do you want it with a lemon twist?” – to Judge Reinhold’s comparison of himself and his partner to Butch Cassidy and the Sundance Kid about to be killed by the Bolivian army, the film is filled with small human expressions of humor and pathos.

It’s also these character actors that allows Brest to work in a bit of a social message, because Axel Foley from Detroit has something to teach these high rollers on the West Coast. He approaches everyone he meets in the same open, humane way. He likes people, and he’s interested in them, no matter how different they are than he. He befriends Lieutenant Bogomil, the stuffy leader of the Beverly Hills cops, and he befriends the man handing out bananas at the fancy hotel buffet (played by Damon Wayans); everywhere he goes, he creates camaraderie.

At base, Beverly Hills Cop is a film about friendship and solidarity, about people from different walks of life encountering each other and discovering to their surprise that they have more in common than they have differences. Like so much from the ’80s, it seems like a distant dream.