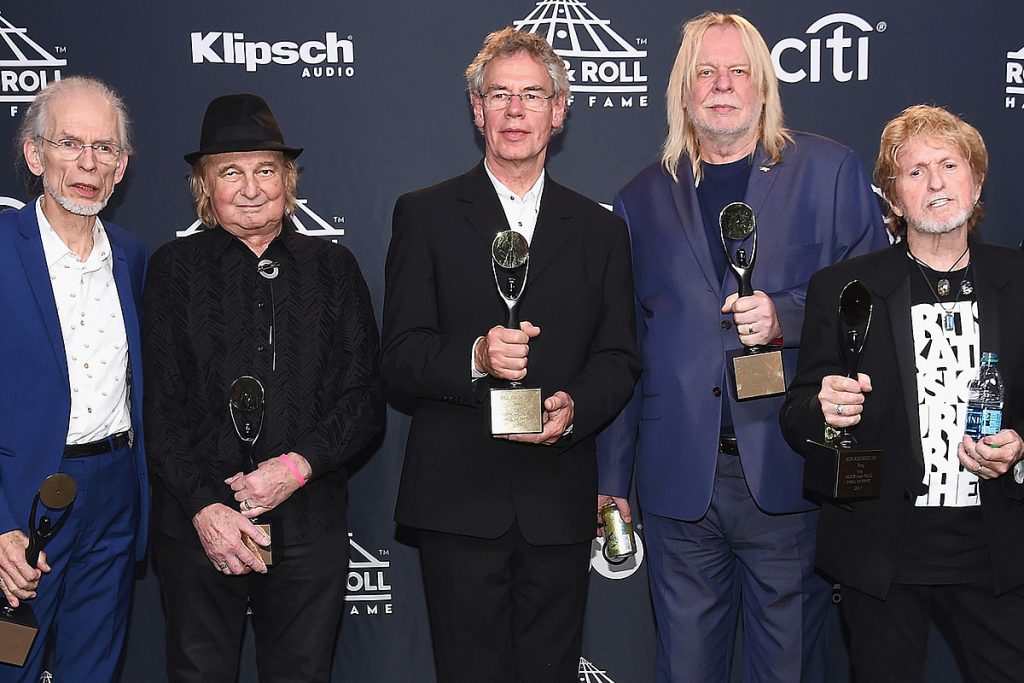 Bill Bruford recalled Yes’ induction into the Rock and Roll Hall of Fame, saying it wasn’t quite the big deal he might have made it out to be at the time.

The retired drummer, who was also a member of King Crimson, added that he doubted Robert Fripp’s band would ever receive the same honor.

Asked if the 2017 induction was a big deal, Bruford told Rolling Stone, “That’s a good question. Well, not really as much as I probably made it out to be to the owners and people who run the Hall of Fame, who need constant reinforcement that their show is the best show on Earth and that we’re all lining up to be in the Hall of Fame.”

Bruford noted that he “was thrilled to be included, and it was a lovely acknowledgement and I took the evening for what it was. The statuette is probably in my bathroom somewhere — I’m not very big on trophy rooms and things. So I’m just not good at prizes, really. To have your work acknowledged by [pioneering jazz drummer] Max Roach or somebody is probably worth more than a Hall of Fame statuette, but hey, I’m happy to go along with it. I’m not the curmudgeon who just can’t stand the idea of being invited or who just complains all the time about not being invited. I’m easy on it.”

He agreed it would “mean something” for King Crimson to be inducted, but added, “I don’t think it ever will because I don’t think Robert would ever go along with that. I mean, if I’m not super-enthusiastic, I think he’s even cooler. So I wouldn’t want to speak for him, but deep down, he’d probably love it, but I don’t think he’d accept it, somehow. I don’t know — what do I know? He’s changed a lot over the years and so have I.”

Bruford, who stopped playing drums soon after his retirement in 2009, argued that younger progressive bands face a different challenge than the ones experienced by his generation. “They have to find their own way, though it’s difficult, because we’ve taken a lot of space,” he explained. “We old boys took up a lot of loose slack that was lying around that we could use for our progression.