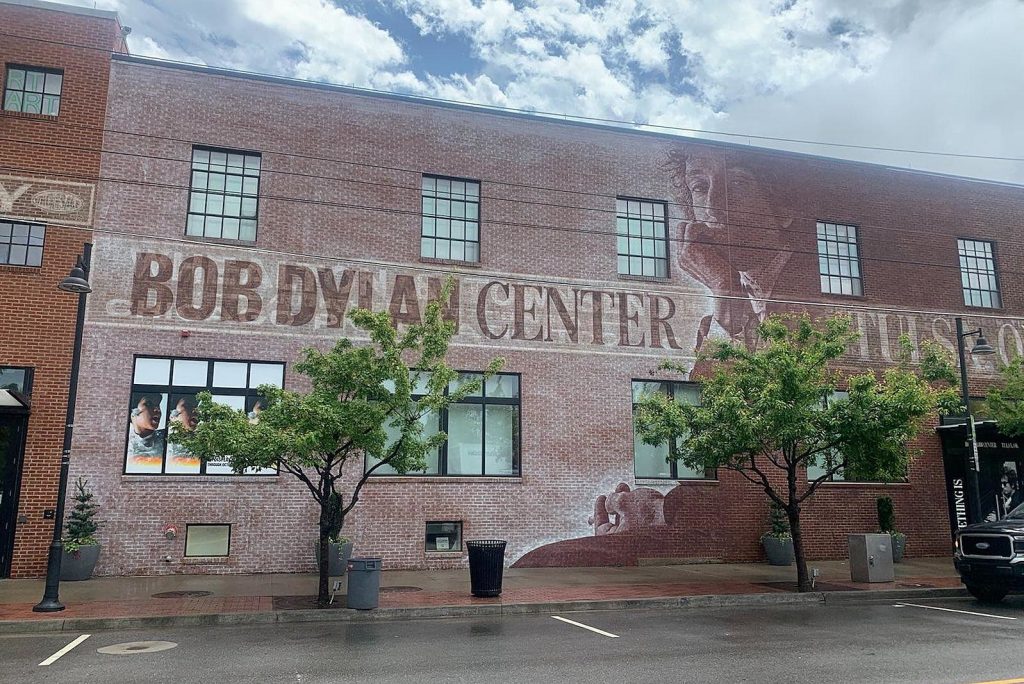 Many have tried to get to the bottom of Bob Dylan throughout his 60-year career. No one has succeeded. His famously enigmatic personality, combined with a decades-deep catalog that runs the gamut from folk to rock to religious music has often left fans, writers and even his fellow musicians puzzled.

There are clues, however, in his massive archive, a significant portion of which is now housed at the Bob Dylan Center in Tulsa, Okla. Dylan admirers can now peruse hundreds of artifacts from nearly every corner of his career, from instruments and lyric sheets to manuscripts and photographs. The $10 million installations will open to the public on May 10, following three days of inaugural events, which will include performances by Mavis Staples, Patti Smith and Elvis Costello.

You can see a gallery of photos from the center below.

Dylan gave his entire archive to Tulsa’s George Kaiser Family Foundation a few years back. The same organization also founded the Woody Guthrie Center, which is located down the block from the new Dylan Center. But besides Dylan’s open admiration of Guthrie, the news still prompted an obvious question: Why Tulsa? “There’s more vibrations on the coasts, for sure,” Dylan told Douglas Brinkley, one of the many donors of the center, in Vanity Fair. “But I’m from Minnesota, and I like the casual hum of the heartland.”

Outside the building, a stoic-looking portrait of Dylan is printed onto the brick wall. “Something is happening here,” it says on the doors. A 16-foot ironwork gate, one of Dylan’s creations, is among the first things that greet visitors as they step inside.

The two-story building is a maze of all things Dylan: the leather jacket worn at the 1965 Newport Folk Festival, spiral notebooks used to scribble ideas for Blood on the Tracks, “Get Well Soon” letters sent to him by fans after his 1966 motorcycle crash, a few of Dylan’s paintings, Christmas cards from the members of the Beatles and notes from Presidents Carter and Clinton, to name a few. Half a dozen Dylan songs were selected as highlights for the center’s opening: “Chimes of Freedom,” “Like a Rolling Stone,” “Jokerman,” “Not Dark Yet,” “Tangled Up in Blue” and “The Man in Me.” Each is paired with various artifacts.

But the Center features more than just the physical items Dylan accumulated over the years. It’s a 21st-century interactive experience that includes a recreation of Tulsa’s Church Studios, where visitors can try their hand at mixing Dylan’s music; a digital jukebox with 162 songs selected by Costello; and audio checkpoints set up throughout the entire space designed by 59 Productions, the company that worked on the David Bowie Is exhibition.

Part of the center’s goal is to encourage people to tap into their creativity. “Just as Dylan has had so much to communicate and share with listeners across decades — in songs, albums, books and performances that are at once startlingly direct, mysterious, ruminative, joyous and confounding — I am certain that you, too, have messages to impart, masks to try on, dreams to share,” the BDC’s newly named director, Steven Jenkins, said in a statement.

There are a few ways the Center will be upheld as “living.” For one, U.S. poet laureate Joy Harjo will be the BDC’s first artist in residence, with more to come. Plus, a rotating gallery of artwork will be located upstairs. (The first creator to be featured is Jerry Schatzberg and his portraits of Jimi Hendrix, the Rolling Stones, Aretha Franklin and, of course, Dylan.) The jukebox and Church Studios recreation will also regularly be swapped out for new curators and songs.

There’s an emphasis on the word “center” in Dylan Center, stressed Alan Maskin of Olson Kundig, the architecture and design firm behind the venue. “I’m more interested in this as a living archive than as a museum,” he recently told The New York Times. “Museum implies a voice that everyone accepts as truth.”

As full as the Dylan Center may seem, it only scratches the surface of its depth. The full archive is available to only credentialed researchers and will regularly receive additions. (For example, in 2016, the foundation purchased the original tambourine belonging to Bruce Langhorne, the man who inspired “Mr. Tambourine Man.”)

Dylan, who will turn 81 later this month and recently wrapped up a leg of his worldwide Rough and Rowdy Ways Tour, hasn’t been involved with the Center’s creation and is not expected to visit during the opening weekend. For an artist whose life and career have been so diligently discussed and widely studied — musically,  culturally, politically — the BDC offers a remarkably satisfying experience to learn more about one of the world’s most oracular figures.

An original advertisement for Blood on the Tracks, on display in the Center, perhaps articulates it best: “We don’t know what change has come about in Dylan’s life. Maybe even he doesn’t. In any case, he isn’t saying. But there’s evidence. And you can judge for yourself.”