Bob Dylan’s ‘Blood on the Tracks’ at 45: A Track-by-Track Guide 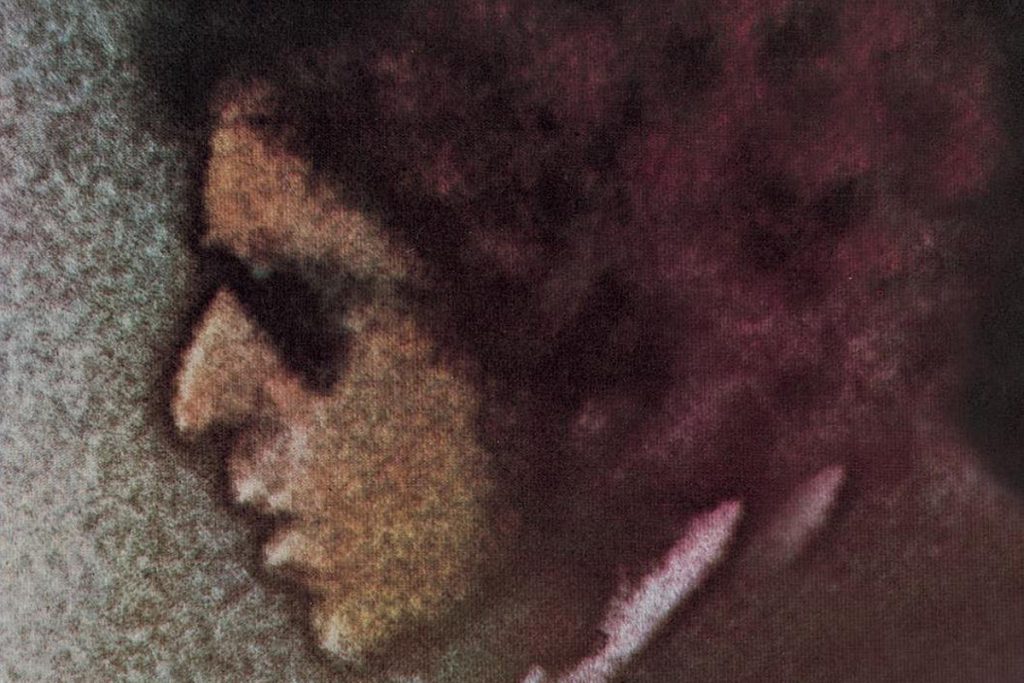 Blood on the Tracks is one of Bob Dylan‘s most celebrated albums, and we’re looking at the stories behind every song below.

The famously private Dylan has said that the songs on this 1975 album aren’t autobiographical, writing in his memoir that they were instead inspired by the works of Anton Chekhov. But it is known that the marriage between the songwriter and the former Sara Lownds was coming to an end, and just about all of the songs deal with the end of a lengthy relationship (“Simple Twist of Fate” is about a one-night stand), with emotions like grief, bitterness and regret permeating the lyrics.

Recording began at New York’s A&R Studios on Sept. 16, 1974. After Dylan made passes at six songs by himself, a band consisting of guitarist Eric Weissberg and his band Deliverance — Charles Brown III and Barry Kornfeld (guitars); Thomas McFaul (keyboards); Tony Brown (bass); Richard Crooks (drums) and Buddy Cage (steel guitar) — were brought into the studio. Only Brown and Cage were brought back on Sept. 17, with Paul Griffin adding keyboards, although Cage and Griffin only played on about half of the songs attempted that day. But after a brief solo session on Sept. 18 — only four takes of “Buckets of Rain” were attempted, Brown returned for the last day.

Test pressings had been made and sent to reviewers, but Dylan then had a change of heart. While visiting his family in Minneapolis in late December, he asked his brother David Zimmerman to recruit some local musicians. He found guitarists Kevin Odegard and Chris Weber, keyboardist Gregg Inhofer, bassist Billy Peterson and drummer Bill Berg. They spent two days in Minneapolis’ Sound 80 Studio, Dec. 27 and 30, cutting new versions of five of the numbers, giving a bit more variance to the music, changing keys, melodies and, in some instances, lyrics.

Thirteen songs were recorded during the six days of tracking, with 10 making it on to the official release and two songs, “Up to Me” and “Call Letter Blues,” finding a home on Biograph and The Bootleg Series Volumes 1–3 (Rare & Unreleased) 1961–1991, respectively. You can learn more about all of those below. The 13th, a cover of an old cowboy song called “Spanish Is the Loving Tongue,” was unearthed on 2018’s More Blood, More Tracks, the six-CD box set that gave an official release to every take from the New York sessions.

“Tangled Up in Blue”

Blood on the Tracks‘ classic opener, “Tangled Up in Blue,” was recorded in both New York and Minneapolis. The one that was originally slated for the record, eventually released on The Bootleg Series, was cut on Sept. 19, 1974 and featured Tony Brown on bass. By the time Dylan remade it on Dec. 30, the key was raised from G to A, and he had changed a few minor lyrical details (he drifted to New Orleans where he had previously gone to Los Angeles and the sixth verse was entirely different, albeit with the same result) and one major one: The lyrics were now entirely in the first person.

Dylan’s lyrics for Blood on the Tracks are often celebrated for the way they take liberties with the concept of time, in particular “Tangled Up in Blue” and “Shelter From the Storm.” But “Simple Twist of Fate” is the most linear lyric on the record. Dylan tells the story of a one-night stand that meant much more to the man than to the woman. (it’s possible, given the part about him looking for her on the docks in the hopes that she’ll pick him again, that she was a prostitute). In the last verse, he switches from third person to the first person. The song was attempted solo and with Deliverance on the first day of sessions, but the version that was released was the third take on Sept. 19 with Brown on bass.

The version of “You’re a Big Girl Now” that appeared on the test pressing, the second attempt on Sept. 17, with Brown, Griffin and Cage, was the first of the New York songs that were remade to have gotten an official release when it appeared on 1985’s Biograph box set. The Blood on the Tracks take was cut in Minneapolis on Dec. 27. Throughout the process, Dylan experimented with the order of the middle three verses of the five-verse song, whose lyrics deal with the sadness of seeing that an ex has moved on to someone else.

One of the high points of Blood on the Tracks, the brutal “Idiot Wind” is a master class of narrative songwriting. Dylan starts off by ranting against his life as the subject of gossip columns, then turns against his ex-lover and, in the last chorus, accepts his own share of the blame for the failure of the relationship. Between the test pressing take, recorded Sept. 16 with Griffin overdubbing an organ three days later, and the Dec. 27 session in Minneapolis, Dylan changed a handful of lyrics, meaning that gems like “Ladykillers load dice on me behind my back while imitators steal me blind” and “You can have the best there is but it’s going to cost you all your love / You won’t get it for money” went unheard until The Bootleg Series in 1991.

In 1994, Hootie and the Blowfish lifted a good chunk of the first verse was lifted for their hit, “I Only Wanna Be With You,” which also quotes “Tangled Up in Blue” and “You’re a Big Girl Now.” Dylan was eventually given a co-writing credit on the Top 10 hit.

“You’re Gonna Make Me Lonesome When You Go”

The session with Deliverance ended after nine attempts at “You’re Gonna Make Me Lonesome When You Go,” most of the time using a country arrangement, with Take 5 re-worked to sound a bit like the Band. But the musicians never got the hang of it — only three of the takes saw them get through the whole song — and Dylan and Brown tried it again the next day, getting the master take on the third try. If there’s a lighthearted moment on Blood on the Tracks, it’s here, with Dylan sounding almost playful when he rhymes “Ashtabula” with “Honolula” and almost mocking his self-pity by comparing his own relationship history to that of the French poets Paul Verlaine and Arthur Rimbaud, whose romance ended when Verlaine shot his lover, wounding him the wrist.

“Meet Me in the Morning”

The only track from the session with the full Deliverance band to make it on to Blood on the Tracks, “Meet Me in the Morning” was nailed on the first and only try, although a verse was edited out on both the test pressing and official release. Dylan and Brown went back to the 12-bar blues on Sept. 19, with one of the takes showing up as the b-side of 2012’s “Duquesne Whistle.” Mick Jagger showed up at A&R Studio on that last day, and suggested to Dylan that he play slide guitar on “Meet Me in the Morning,” but his attempt at it didn’t work out.

“Lily, Rosemary and the Jack of Hearts”

Clocking in at nearly nine minutes, the sprawling “Lily, Rosemary and the Jack of Hearts” is the longest cut on the album. It’s a Western film — set in a cabaret, complete with gambling, duplicitous men and women, a drunk judge, a killing (followed by a hanging) and an enigmatic, shadowy figure who pulls off a bank heist — told over the course of 15 verses. A 16th, placed after the one that begins, “The backstage manager was pacing all around by his chair,” was on the test pressing, recorded solo on Sept. 16, the second take and the last solo recording before Deliverance showed up. The official version was recorded on Dec. 30 in Minneapolis.

“If You See Her, Say Hello”

“If You See Her, Say Hello” was one of the three tracks from the New York sessions that made its way onto the first Bootleg Series box, with Dylan’s solo version from Sept. 16 getting released. However, it wasn’t the same one as the test pressing, which was the only attempt at it on Sept. 19. But Dylan still wasn’t happy, and re-cut it on Dec. 30, overdubbing a mandolin part after Peter Ostroushko couldn’t get what Dylan was after.

“Shelter From the Storm”

As with “Tangled Up in Blue,” “Shelter From the Storm” picks up different moments of an ended relationship that exists outside of time, and yet it coalesces into a full story of one who was rescued, loved and ultimately hurt by a woman, with biblical imagery abounding. Throughout it, Dylan keeps coming back to her words (“‘Come in,’ she said, ‘I’ll give you shelter from the storm'”), giving it different meanings throughout its 10 verses. He and Brown only needed four takes, all of them from Sept. 17, to land the master. The first one, which features Griffin on piano, was eventually released on the Jerry Maguire soundtrack.

Blood on the Tracks closes on a note of resignation with “Buckets of Rain,” which concludes with Dylan realizing that “Life is sad / Life is a bust / All ya can do is do what you must.” It was attempted 12 times over the course of the last three days in New York, with Dylan and Brown getting the definitive version on the 10th try.

Dylan’s lyrical genius is at its peak on “Up to Me,” filled with lines like “I’ve only got me one good shirt left and it smells of stale perfume,” “It frightens me, the awful truth of how sweet life can be” and “I was just too stubborn to ever be governed by enforced insanity” leaping out of the speakers. Why he kept the song, recorded on Sept. 19, in the vault until Biograph is anyone’s guess. However, his friend Roger McGuinn recorded the first seven and last two verses of the 12-stanza song for 1976’s Cardiff Rose.

The only other tune with Deliverance to have gotten an official release (on The Bootleg Series), “Call Letter Blues” features an overdubbed steel guitar part from Cage and some of Dylan’s most impassioned blues vocals, particularly when he sings, “The children cry for mother / I tell them mother took a trip.”