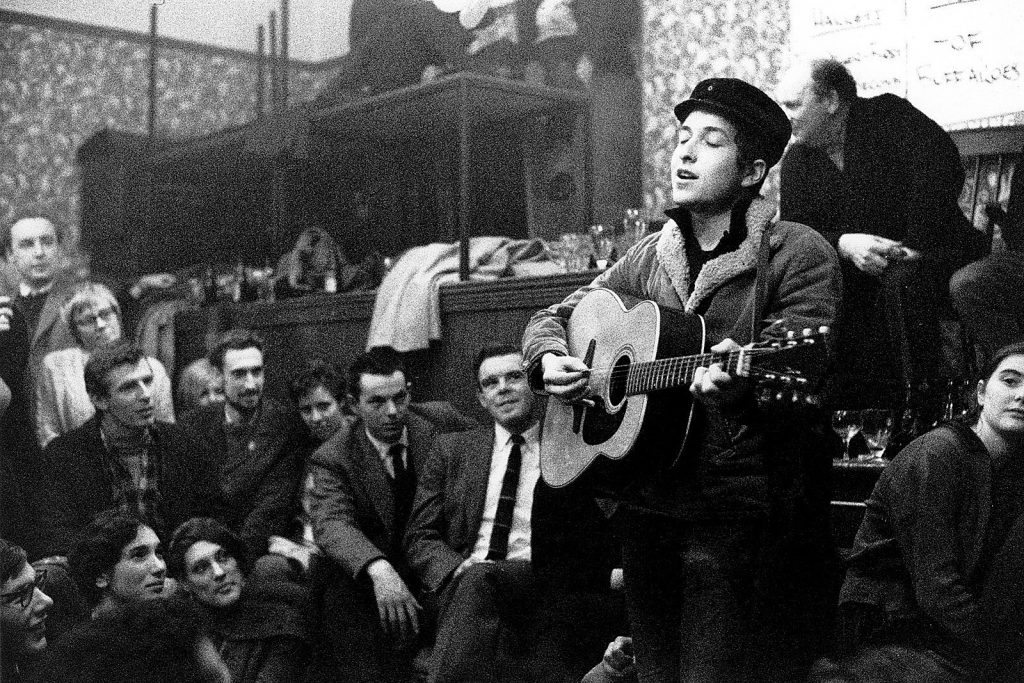 Nearly 60 years ago, on April 12, 1963, Bob Dylan made his debut at the Town Hall in New York City, a historic venue in Manhattan’s Theater District that first opened its doors in 1921. It was his first large-scale concert.

Dylan’s set that evening included several songs from his then-unreleased second album, The Freewheelin’ Bob Dylan — songs like “A Hard Rain’s a-Gonna Fall” and “Masters of War” that would ultimately become some of his most cited politically-tinged works.

“A memorable evening of new songs by an incredibly gifted songwriter,” Robert Shelton wrote of the performance in The New York Times, describing the 21-year-old Dylan in his blue jeans as appearing like “a Holden Caulfield who got lost in the Dust Bowl.”

On Friday night, just shy of six decades since that concert, a memorable evening of no-longer-new songs was performed at the Town Hall by a cast of musicians including Bill Frisell, Sara Bareilles, Margaret Glaspy, Joe Henry, Julian Lage and the McCrary Sisters, among others. Organized by T Bone Burnett, a longtime collaborator of Dylan’s, in partnership with the newly opened Bob Dylan Center, the show specifically commemorated Dylan’s 1963 debut at the Hall, with proceeds from the evening benefitting the venue.

“Town Hall has been the location of many fateful moments, and I’m grateful for the invitation to celebrate one of those historic evenings on the 60th anniversary of Bob Dylan’s first concert there,” Burnett said in an earlier press release. “He sang twenty four songs that night, all of which have been woven into the fabric of our culture. We are going to play a few of those songs, and we are also going to celebrate the sixty years of songs that have followed that night.”

Frisell, one of the country’s premier jazz guitarists, has collaborated with Burnett on previous occasions, as well as contributed to albums by Elvis Costello, Marianne Faithfull, Bonnie Raitt, Lucinda Williams and Robert Plant, to name a few. But he’s always kept an ear turned toward Dylan.

“[He’s] one thing that just stayed consistent throughout whatever phases I’ve gone through, you know, with getting more into blues and then into jazz and into whatever I was into,” Frisell told UCR in an exclusive interview prior to the Town Hall concert. “I never stopped being into him the whole time.”

Frisell was first introduced to Dylan’s early records in school by one of his English teachers — “the hippest English teacher that ever lived” — and was immediately enthralled. He’s been listening to Dylan ever since. “He’s just constantly reinventing himself…that’s so inspiring for me. That’s what I’m trying to do,” Frisell said. “I mean, I could play the same songs every night, it’s not about that. But it’s about finding something new and unexpected every night, and trying to stay in that place where you’re not quite sure what’s going to happen next. And that’s where the real stuff happens and the way you keep growing. And for me, that’s what [Dylan]’s done his whole life.”

The show was opened by poet Joy Harjo, who is currently the Artist-In-Residence at the new Bob Dylan Center. She began with a poem that bled into a few verses of “Blowin in the Wind.” The set list for the evening then stretched from Dylan’s early works, to some of his later, like “Serve Somebody” from 1979’s Slow Train, performed by Glaspy, Joe Henry and the Punch Brothers, and the show’s encore song, “Not Dark Yet” from 1997’s Time Out of Mind. (The 2022 Town Hall concert was held on the 25th anniversary of Time Out of Mind‘s original release.) Behind the artists, a large photograph of Dylan was displayed, taken on the evening of his 1963 Town Hall performance.

Following “Not Dark Yet” was a brief, satirical version of “Rainy Day Women #12 & 35,” featuring lyrics inspired by Dylan’s career. Burnett appeared on stage to join the fun, adding a few lines that emphasized just how far Dylan has come since his first large concert at the Town Hall in 1963 — “They’ll stone you when you win the Nobel Prize,” he sang.