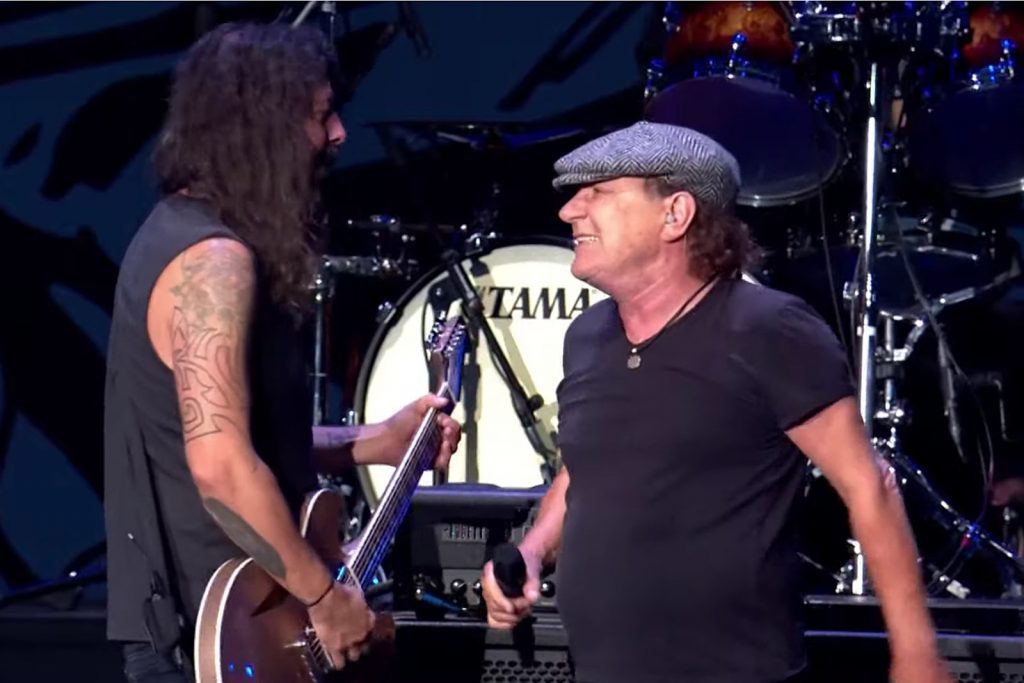 The rough-and-ready performance took place more than midway through the Wembley Stadium concert. Taking the stage before it began, Dave Grohl warned the crowd: “We’re not even fucking close – I hope you wore comfortable shoes! Please welcome to the stage our good buddy Lars, and Brian Johnson from AC-fucking-DC!”

“This is fantastic!” Johnson declared before Foo FIghters, with Grohl playing third guitar, launched into “Back in Black.” Justin Hawkins of the Darkness briefly joined in as well, although he seemed to encounter technical difficulties with his microphone.

Next, the band broke into “Let There Be Rock,” which proved to be another rough but fun performance. Johnson worked up a big sweat while making air-guitar motions nonstop and shouted “Taylor, this one’s for you!” as the song reached a close. “That was some noise,” he said afterward as he, Ulrich and Grohl shared a group hug.

“Taylor, I know you’re watching, I know you’re hearing this, I know you can see this,” Ulrich said. “We fucking love you. On behalf of everyone in Metallica, nothing but love.” Johnson could be heard still laughing as the pair left the stage together.

Johnson and Hawkins crossed paths many times during the late drummer’s lifetime. One instance took place following the Grammys in Los Angeles. As recalled by Grohl, he, Hawkins and some other members of Foo Fighters were planning to go out to dinner following the awards show. Paul McCartney asked if he and his wife could join them.

“So then [McCartney] bumps into AC/DC in a hotel or something. And then they say, ‘What are you doing after the show?’ And he says, ‘I’m gonna go have dinner with the Foo Fighters,’” Grohl explained. “And Paul said, ‘Do you wanna come?’ So Paul’s wife calls my wife, and then my wife says, ‘Hey, do you mind if AC/DC comes to dinner?’”

Hawkins regularly covered AC/DC in his side project Chevy Metal. In 2021, he got to experience the real thing. During Global Citizen’s VAX LIVE: The Concert to Reunite the World, Foo Fighters brought out Johnson as a special guest. The artists then rocked through an emphatic rendition of “Back in Black.”

Johnson and Hawkins also appeared in What Drives Us, a 2021 documentary directed by Grohl, which looked at the highs and lows of life on the road for young bands touring in a van.

“Taylor was a lovely man, his smile was legend, his drumming intense and brilliant, and he could sing as well,” Johnson recalled in a statement prior to the tribute concert. “When we gather to salute this man and his family we do it as friends, we do it for him, and we do it with his band the Foo Fighters, who I know will do him proud. I’m honored to be part of it.”

Although Ulrich and Hawkins never shared the stage, they crossed paths several times. Hawkins and Grohl co-hosted the “Death on the Radio” world premiere of Metallica’s Death Magnetic in 2008, where they chatted with all four members about their new album. (Hawkins praised “My Apocalypse” in particular and said it was his favorite song on the record.) Hawkins also interviewed Metallica at the second installment of the band’s Orion Music + More festival in Detroit in 2013.

The drummer flexed his Metallica chops during a Foo Fighters show in 2018, when they brought a 10-year-old boy onstage and played a truncated version of “Enter Sandman,” along with snippets of “Welcome Home (Sanitarium)” and “Wherever I May Roam.”

Ulrich shared a photo of him and Hawkins on Instagram with a touching caption the day after Hawkins’ death. “Thank you, Taylor,” the post began. “Thank you for always having the biggest warmest smile on your face and for lighting up every room with your infectious energy and good vibes.

“At BottleRock recently, I had the best seat in the house right above you and once again stood in amazement watching as you effortlessly steered Foo Fighters through a two-hour festival set with the perfect balance of swing, swagger, bounce and insane chops,” he continued.

“Your phone call a week ago touched and inspired me and I will always be appreciative for you championing our community as in your parting words … ‘Drummers stick together!’ Damn right, brother. Except now the community is lesser without you. Rest in Peace.”