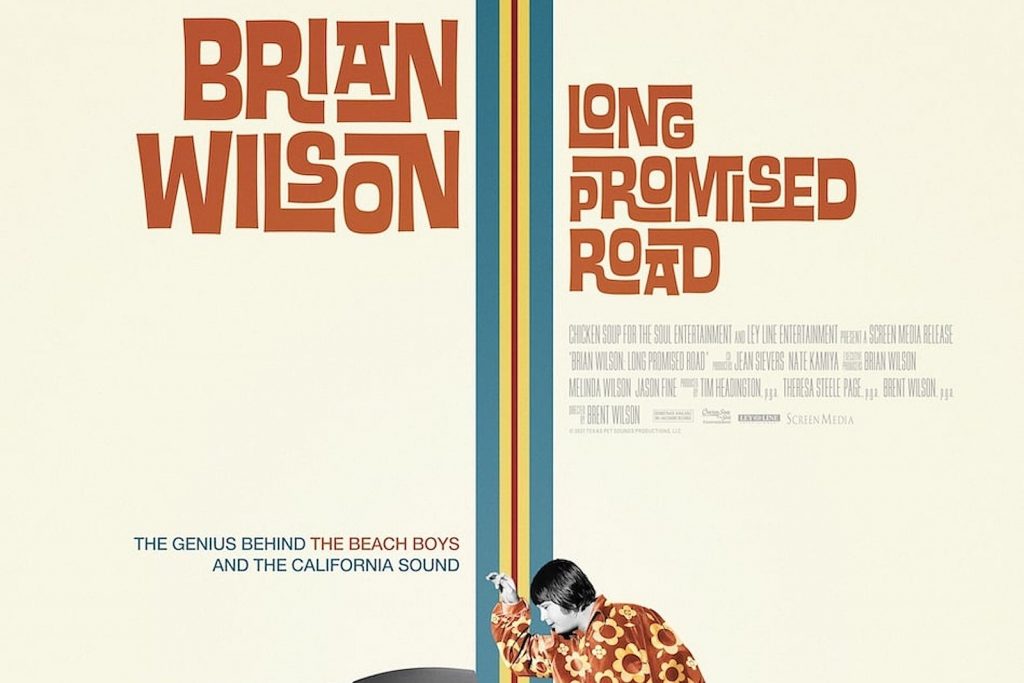 Brian Wilson‘s story is one of both unparalleled creativity and undoubted resilience.

Beyond the catchy bops of the Beach Boys earliest years — “Fun, Fun, Fun,” “Surfin’ USA,” “I Get Around”— it was clear that Wilson was chasing a different kind of sound: a harmonically complex and uniquely layered one that utilized orchestral instruments and studio techniques in ways no artist had done before. It was 1966’s Pet Sounds, Wilson’s most acclaimed piece of work, that the Beatles later cited as the inspiration for Sgt. Pepper.

But while Wilson was chasing sounds in the studio, he was also attempting to escape the ones he heard inside his head. Now 79, Wilson has battled mental health issues for over 50 years having been diagnosed with schizoaffective disorder and depression. Heavy drug usage over the years and a controversial relationship with his psychologist, Eugene Landy, only amplified Wilson’s internal struggling. But today, Brian, the last living Wilson brother from the Beach Boys, is still making music, performing live and delighting audiences around the world.

A new film, Brian Wilson: Long Promised Road, aims not to highlight Wilson’s complicated past, but his remarkable present. The movie, directed by Brent Wilson, (no relation to the artist), features dash-cam footage of Brian driving around southern California with Rolling Stone magazine editor Jason Fine as the pair talk about old times, listen to music and occasionally stop at restaurants. Supplemented with interviews with a wide range of fellow musicians from Bruce Springsteen to Elton John, Jakob Dylan to Nick Jonas, Long Promised Road portrays one of the world’s most influential musicians through the lens of his “third act.”

Brent Wilson discusses the making of the movie, which premieres in theaters tomorrow via Screen Media, with UCR.

You first met Brian on the set of your film Streetlight Harmonies and you told him you were interested in a project focussed on what you call the “third act” of his career. When you first proposed the idea to Brian, what did he think?
We spoke to his manager first, so I’m not exactly sure what Brian’s reaction was, but I know that Brian was up for anything. … Brian likes to work. He likes to be touring, he likes to be out working, he likes to have something to do. So I suspect when we approached them, and they talked to him, he was okay with it, because Brian doesn’t do anything he doesn’t want to do. … Brian is secure in his legacy. He’s comfortable with what his music means to people now, I think he’s comfortable with his own history, and what’s been told and what’s not been told … And so when he said yes, I was like, ‘Alright, this is gonna be great.’

The thing that stands out to me is just how well Brian and Jason get on. I know Brian wasn’t all that comfortable with the traditional sit-down interview style, but working with Jason, whom he considers a friend, meant he had a familiar face to chat with. What do you think it is about Jason in particular that makes Brian feel more at ease?
I think what Jason has earned with Brian is that he doesn’t force him. Jason is very patient with Brian, he doesn’t feel like ‘Okay, I’ve got my 20 minutes with Brian and I’m gonna just keep asking my questions and see where I’m at 20, 30, 40 minutes from now. ‘Jason is like, ‘If I don’t get anything, if he doesn’t want to talk, we don’t talk. If he feels like talking, then I’ll listen.’ But he doesn’t force that issue. And I think there’s a real art to that. … It’s almost kind of like a buddy picture, in some ways — you know, Butch Cassidy and the Sundance Kid, or something, and we just kind of approached it that way. Two friends, when they’re together, don’t always have to talk. And if you’re really good friends, you can just kind of sit in the car and listen to music.

Whose idea was it to shoot the footage from inside in the car?
I tried to interview Brian — it went terrible. You see a little bit of that at the beginning. And I was like, ‘Okay, I’ve got to find a better way to make this work.’ And so I approached Jason, through Brian’s manager, Jean Sievers, and she had suggested I talk to Jason and get some advice. But I read an article called Brian Wilson’s Better Days he had written for Rolling Stone, it was about four or five years ago. And in that article, he talks about driving around L.A. with Brian and they go to the movies and see the Wrecking Crew documentary, they go out to dinner, they cruise out to Malibu and have sushi and Jason describes all this. And I thought to myself, as I was reading that article, I was like, ‘That’s the movie I want to see. That’s my film.’ I said, ‘What if I could rig up a car where Brian doesn’t have to wear a microphone, and there’s no lights, and the cameras are on the dash and all of that and just let those guys drive?’

Another interesting part about this film is that, technically, Brian scored the soundtrack himself because it’s him picking and choosing what he wants to listen to in the car. Was that the plan all along?
Not necessarily. We knew we were going to let Brian pick the music, but I didn’t think he would. I knew we would load it up, but what I was so pleasantly surprised by was how much Brian likes to listen to his music. You know, you hear interviews with actors or whatever and they’re like, “Oh, I’ve never seen that movie since the premiere.” … But Brian likes his music. He’s proud of his music. I didn’t realize that at the time. He had it there, he kept asking. And what I loved was that he kept asking for the songs that meant something to him, not necessarily the hits. He chose songs that his brothers sing on and participate in – I think it was a way for him to connect with his brothers, which became a central part of the film.

You ended up with dozens of hours of footage and it must have been really difficult to edit it down. Was there anything that ended up on the cutting room floor that you wish people could see?
Oh, absolutely. There’s a ton of stuff, such painful decisions to cut some of the material. There was a moment where Jason and Brian went back to Brian’s high school, Hawthorne High School. And Brian, very famously, got an F in music class, and when we asked the principal about coming back to the school, she goes, “You know, Brian has an F here and we’ve always felt like that’s wrong. We should probably change that.” And she goes, “I have the power to change that. Do you think Brian would be okay with that?” “I think Brian would love it.” And so that was a great scene that ended up on the cutting room floor. And there’s a lot of kind of what I call non sequitur moments, where Brian will just say something completely random and something completely funny. I wish I could have had those kind of non sequitur moments in there. There’s a great moment where Brian was talking about how he used to work out because he wanted to have good pecs. I was like, ‘Well, that’s just funny.’

It’s really incredible to watch the footage of him in the studio today working on music. And when he’s performing live too. He’s still got such a creative edge, it’s really cool to see.
Yeah, it was lovely to see and to discover, because what I found amazing about this “third act” is that, you know, Brian quit, at 25, touring, he stopped. So I was intrigued by this guy, this person, who was doing something at 75 that he didn’t have the courage or the ability to do at 25. Typically, I think most of us, that ability to kind of shed that baggage, and that ability to discover that strength — that baggage gets heavier as we get older. And Brian found a way at an age in his life, to shed that baggage and to confront those fears and put himself out there on the road when he couldn’t do it at 25.

One thing that’s really interesting about the interviewees you have in this film is that they’re so wide ranging. You go from Bruce Springsteen to Nick Jonas, Elton John to Jakob Dylan. Of course, the common thread is their love for Brian’s work, but how did you go about selecting these people?
The idea was that I wanted a really diverse list. I was trying to not to find redundancy. You have Bruce Springsteen who’s an American icon, you have Elton John who’s an English icon, the other side of the ocean. You have Gustavo Dudamel, who is the world’s most famous conductor and he’s from Venezuela. You have Jakob Dylan, who grew up in Southern California and is exposed to the Beach Boys through his dad. And then Nick Jonas is of another generation. He’s three generations removed, but he had popularity as a teenager, much like Brian, in a group with two brothers, and then in his 20s is now trying to make his sound more adult and try to break away from his pop sounds. So I thought to myself, ‘My God, if there’s anybody out there today that understands Brian Wilson, it would actually probably be Nick Jonas because he has walked that path.’ … The idea was, as you said, I wanted these people to have only one connection, which was Brian Wilson. So if you’re flipping through the channels and you see Gustavo Dudamel and Nick Jonas and Bruce Springsteen, you go ‘What in the world do these people have in common?’ The only answer could have been Brian Wilson.

Was there anything that surprised you while you were making this film?
I think the biggest surprise was when we went into the studio. I wanted to see Brian produce — I wanted to see that and I wanted the audience to see that. And so our producers indulged me by allowing us to have Brian’s full band into a giant studio recording live, which nobody hardly ever records that way anymore. They don’t record that way because it’s expensive and you can just pull up a file on a computer if you want and do it. And so to put 12 members of a band into a room and play at one time is just pretty rare. But I know that’s how Brian recorded in ’64, ’63, ’62, that’s what he was doing. And I thought to myself, ‘I want to see if that’s how he still does it.’ …  Pretty much what you see in the film is exactly what happens. Brian comes in, he sits down and he just starts. He starts telling these guys: this is how we’re going to do it. That was amazing to see. That was a gift.

You’re a longtime Beach Boys / Brian Wilson fan yourself. What do you hope viewers take away from this film?
I’m hoping that we demystify, Brian. You know, there’s a myth around Brian. If you Google “Brian Wilson paintings,” there’ll be 1000 paintings that show up. There’s dozens of books and essays and documentaries and feature films and he’s become a mythic character in some ways. — there’s the Barenaked Ladies song, “Brian Wilson.” … He’s not a myth and he’s not a recluse. He’s a sweet, kind man.