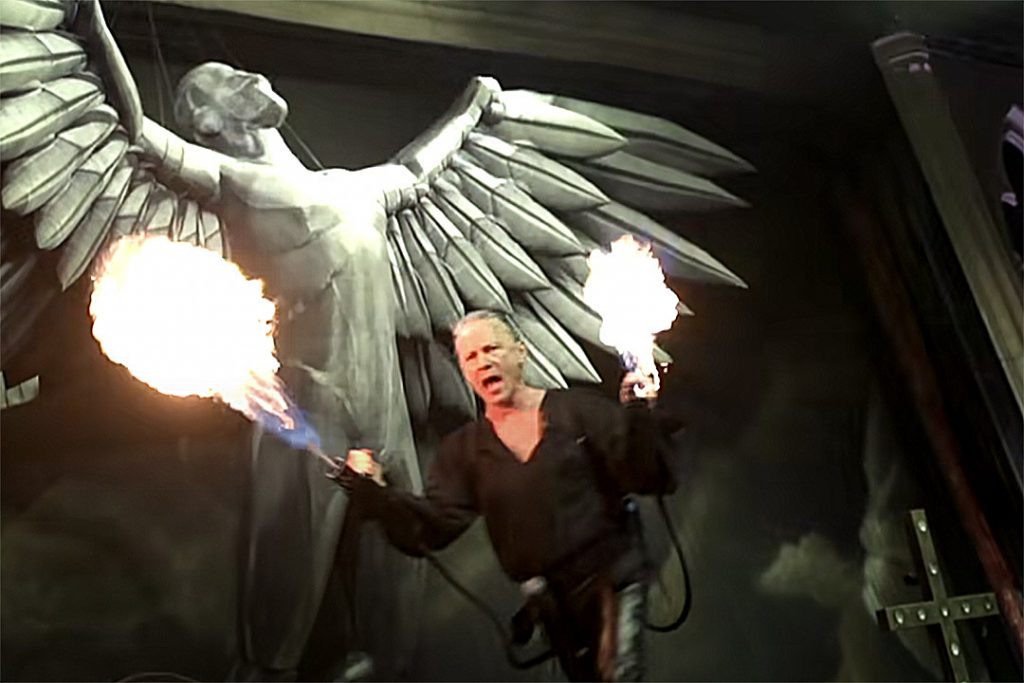 Bruce Dickinson has detailed some of the problems he’d faced with onstage props during Iron Maiden’s recent tour.

In a pair of behind-the-scenes videos, available below, the frontman offered a guided tour of how he delivers his performance every night.

Among the revelations were that he has a roadie to ensure his costume changes go smoothly, and that many of the clothes he wears are reused from previous performances. “Nothing goes to waste!” he observed.

Dickinson reported that the flamethrower backpack he uses weighs around 30 pounds. “Sometimes I get a few burns on the hands because the thing won’t go out,” he said of the prop’s nozzles. That came after he’d had to climb a tight flight of steps onto the stage wearing the flamethrower under a cape while also carrying a prop cross. “I’ve got the hood down so people can’t see – and neither can I,” he said. “I have to get rid of the cape, and you have to really make sure it goes because it’s got stuck on the flamethrower a few times, and that’s really embarrassing.”

The costume change that followed was one of his biggest. Dickinson said that before he was ready he could often hear drummer Nicko McBrain counting the next song in. ‘I’m like, ‘Stop! Not yet!’” he laughed.

Later in the show he had to be take care around a noose being hung from above, because at one point it was set to fall to the ground. “Except one night it didn’t,” he said, explaining that he’d had to physically pull it. “It came down and nearly knocked me senseless – heavy piece of rope, whack, ow!”

Dickinson later had to pick up one of two prop swords to perform a battle scene with the band’s mascot, Eddie. “Make sure you have the right sword,” he said. “One of them is bendy, one of them is not. If you hit Eddie with the bendy sword, it’ll bend in half. it’ll look shit.”

He also reported that he suffered from a “snotty” nose while singing, and he always had a cup of coffee at his prop station, although he hardly ever drank it. “I literally smell the coffee,” he joked. “I go through between a liter and a half and two liters of water and I lose about three to three and a half liters during a show… I’m about a liter in deficit by the time I get back to the hotel, so I put that [back] on.”

Iron Maiden brings the Legacy of the Beast Tour to Austin’s Moody Center on Sept. 13, 2022.