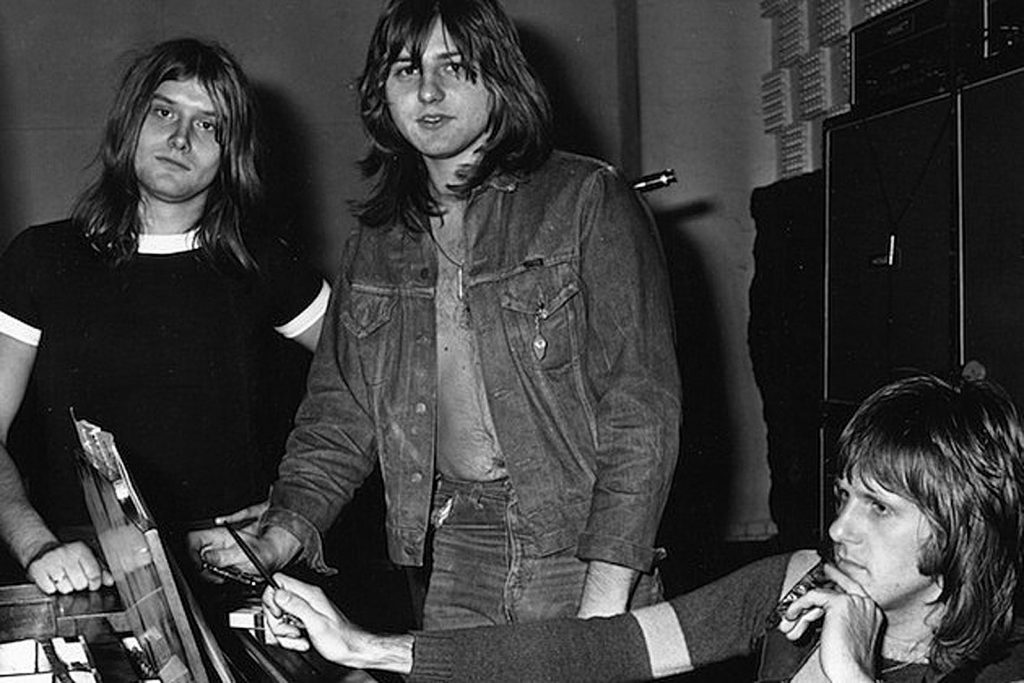 The idea of resurrecting Emerson, Lake & Palmer using hologram technology doesn’t interest Carl Palmer. He cites the Frank Zappa hologram tour as one that left him cold because it wasn’t “sincere enough.”

But as the drummer tells UCR, he’s moving closer to finalizing his own concept, incorporating footage from a 1993 gig at the Royal Albert Hall in order to share the stage again with his late bandmates Keith Emerson and Greg Lake.

The project is just one of many in the ongoing efforts to revitalize the prog-rock group’s legacy. The first official book about the band is due for release in the coming months. There’s also a new box set, Out of this World (1970-1997), which pulls together five shows, including a previously unavailable live performance from Phoenix. Perhaps the most intriguing item is a proposed movie based around the storyline of the band’s classic “Karn Evil 9” suite from 1973’s Brain Salad Surgery.

Palmer reveals some new details about the film’s ongoing development, but he also cautions that fans shouldn’t expect the project to hit theaters for another couple of years.

As far as the potential Karn Evil 9 movie, how much were the three of you into science fiction?
We weren’t into science fiction at all. When we put together the Brain Salad Surgery album, which is where “Karn Evil 9” came from, we started to look at the future and things that were happening — the advent of computers and stuff like that. We decided that we’d like to write some music that had lyrical content which looked at A.I. [artificial intelligence]. Even that term wasn’t being used then, but we realized that’s the way things were going. It was way in front of its time, we know that.

Pete Sinfield also played a big part, with helping write the lyrics for that one. That was very important. He sort of came up with the lyrical concept in a way. Obviously, the music, it was taken care of by the band.

When did you first hear the beginnings of the “Karn Evil 9” suite?
Musically, it was growing every day in the rehearsal room, and it was developing. There were various sections we had which were sounding pretty good. Lyrically, that was developing a lot slower, because Greg [Lake] was doing some of it and Pete was doing some of it. That sort of took on its own timeline, as it were.

How did it come together in the studio from a recording standpoint?
It was probably one of our most adventurous recordings and one of our most forward-thinking pieces of music. The recording, I can’t remember very much at all. I do recall it was Advision Studios, which had become a big favorite of ours for a long, long time. We recorded a lot of albums there. That was the last one that we did there. Basically, we recorded the first [four] albums, of all of the biggest albums we had, there. That particular studio seemed to really be the place that we felt the most comfortable. Obviously, Pictures at an Exhibition was recorded live, so we can’t put that down to Advision, but the environment itself was incredibly conducive to being productive.

What would you want to see from the potential Karn Evil 9 movie?
The Karn Evil 9 movie, you know, might not necessarily be a full-on sci-fi movie. So please don’t take that as being something that’s going to happen. What it might be is exactly what we’re dealing with today, with more computers being put into place and less bodies being used. Which is where we are in a lot of the areas of the world. That aspect of it is very important, and the fact that computers can solve problems quicker than lots of human beings. We’re sort of looking at [a number of different options]. It’s Ted Field, actually, who owns Radar [Pictures], the company who are involved. They’re looking at the best writers.

Various ideas we’ve had come through and spoken about have not been exactly where we would like it. They’ve not wanted it, exactly. We’ve now gotten to a stage where we’ve met a couple of other people, which I don’t want to mention. We’re just waiting to get a clear idea of how they see it. Because we do need outside writers to write the actual story. Emerson, Lake & Palmer music will be used. Some of it might be re-recorded, and there might be other music as well, which would be in the film. But we’re not at that stage yet. The concept that we sang about, that’s what the timeline of the story is going to be around. How we present it, [doing it as] full-on sci-fi doesn’t really register high with us. But there will be some in there. It’s really in the embryonic stage. You’re not looking at anything before 2024.

One of the things in this new box set is the band’s second-ever performance as a group, at Isle of Wight. What are your key memories of that gig?
The traffic jams were so bad going into the concert area. It was one of the first big concerts we’d ever done in the U.K. area, as it were, so the organization wasn’t up to the 100 percent professional standard that we’d expect today. But as we know, festivals still go wrong. Because the traffic was so bad, we flew in by helicopter, and after the concert we flew out. We went in with our stage clothes on and jumped back in the helicopter and left. I saw nothing there at all. All I can tell you is that we went to the concert relatively unknown as a band because it was only our second gig. The individuals were known, but we left internationally known. It was an overnight success, as it were.

The first gig the band played was much smaller. Going to Isle of Wight, it seems like it would have been daunting to play to such a huge crowd.
Not really because Keith [Emerson] had come to America and had supported various other bands, playing 7,000-seater-type venues. With Arthur Brown having a hit single, we came over and played things at the Anaheim Convention Center. So it was nothing to do with the amount of people there. That was irrelevant to us. It was great that they were all there. We were a last-minute add-on. It wasn’t something that was planned. We only had 43 minutes to play, and I think we played 47 or whatever. So for us, it was another day in the office, actually. It was just a bigger office. [Laughs.]

The three of you all had confidence in what you were doing collectively as a group at that point, it seems.
I think if you believe in what you do, that confidence does come out. If the public sees that confidence, it’s going to help you. It’s not a negative mood. We were playing in our home country. So for us, it was a great way of starting. Having that opportunity to play on such a big festival was obviously vital and very, very important, and we took that opportunity.

There’s a generous selection of concerts from different eras in this box set. What was it that made up a really great ELP show for you?
I think, to be honest with you, the way that technology was used, the keyboard technology was being developed at an incredible rate during that period. Because of that, we managed to latch onto as much of that as we could. You know, traveling with a big Moog was a major problem because it wasn’t built for the road. It was only built for the studio. Those moments of technology, incorporated into the sort of high end prog music we wanted to play, it was a magical mix.

There are great moments in live videos of the band where Keith Emerson dramatically shoves his organ over. What did you think when you first saw that?
It’s exciting, like it is for the fans. It’s enhancing the music, so it’s exciting and it means something. He only did it to enhance the music. It wasn’t just done for the sake of — anything that we did, any stage effect, any lighting or video effect or anything, was really to enhance what we were doing at the time. That’s all it was done for. He had been doing that for years [including] with the Nice, so that wasn’t new when he brought it to ELP.

Where are things with your idea to mount a show that would put you back on stage with Keith and Greg?
We’ve gotten it to a stage where I will review it again in January. But yes, it’s possible. The audio is clean, and the footage is remarkable. It’s already been out on DVD, but it got lost in the crossover between two record companies and distribution problems at the time. The actual footage was a five-camera shoot, and it’s absolutely exquisite. There’s no problem with using it. It was also a very interesting moment because it was the only time that we ever had Greg center stage. He was usually stage left. I was in the middle and Keith was stage right. With these particular cameras that we had, we do have some lovely shots of the two of them, where one is on the screen, but in the distance you see Keith and vice versa.

It was quite an unusual period because we’d never set up that way. It just so happens that the camera shots and the audio lines are all really good, and those are the ones that I’ll be taking to use. There will probably be about five or six songs which could be used.

There are holograms and a lot of other things. How did you arrive at the idea of doing this?
I’ve already done the holograms. You know, the reviews on holograms — I went to hologram concerts, and I thought if I could get live footage of the actual person playing, meaning Greg or Keith, that would be better than trying to put this hologram together. Which from certain points in the theater, doesn’t look as good. If you’re too far down the front, you only see it from the knees up. There are too many problems. I went to [see the] Frank Zappa [concert] for one, and I knew that wasn’t what I needed. It wasn’t sincere enough. It wasn’t good enough. You get the odd one like Ronnie James Dio, where he’s just standing on his own. It’s okay. But they didn’t wow me.