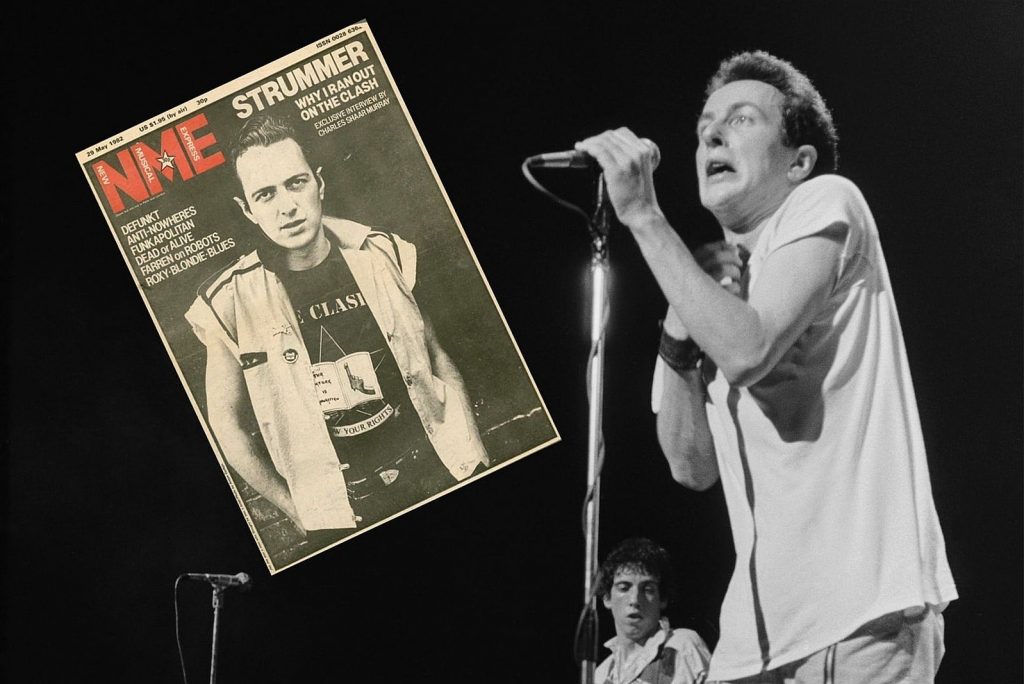 Joe Strummer was having a typical rock star’s day, even doing a promotional interview on April 21, 1982, for the Clash‘s upcoming shows in Scotland. Then he vanished.

Manager Bernie Rhodes reportedly concocted the stunt in hopes of garnering needed headlines ahead of a string of U.K. dates that weren’t selling as expected. The idea was for Strummer to steal away to Texas, where he’d hang out with pal Joe Ely in Austin.

“There was a gig in Inverness that wasn’t sold out, but we could have filled it easy,” Strummer told Uncut in 1999. “He panicked and said, ‘Someone’s got to break their arm or something. You’ll have to disappear.'”

Only Strummer went to Paris instead, without alerting anyone.

“I felt like disappearing anyway,” Strummer added. “I was supposed to call him when I went away but I thought, ‘This has got to look good.’ So I really did disappear.”

His quick visit stretched into a week, which in turn became several weeks. The Clash’s Know Your Rights tour in support of their upcoming album was derailed. Perhaps unsurprisingly, ticket sales had sagged even further – since nobody knew where Strummer was. Rhodes’ feigned concern became real worry.

“Well, it was something I wanted to prove to myself – that I was still alive,” Strummer told NME. “It’s very much being like a robot, being in a band. Rather than go barmy and go mad, I think it’s better to do what I did even for a month. I think I would have started drinking a lot on the tour, maybe, started becoming petulant with the audience – which isn’t the sort of thing you should do.”

Combat Rock was prepared for release as everyone cooled their heels. It would become their best-selling LP, reaching the Top 10 in the U.S. and the U.K., while going double platinum. The Clash, however, were coming apart at the seams. Strummer had plenty of reasons to hide.

Listen to the Clash’s ‘Straight to Hell’

“It wasn’t a very happy band at that time,” drummer Topper Headon told Classic Rock. “I was addicted to drugs, out of my head all the time. As well as that, [Clash bandmate] Mick [Jones] was behaving like a rock star, and we’d all lost sight of what we’d set out to do in the first place.”

Their Aberdeen show was canceled, followed by the Inverness date that started it all. NME readers were asked to telephone “Sheila at the Clash’s office” with any information about Strummer’s whereabouts. By early May, 11 previously scheduled concerts had been moved to July.

“I only intended to stay for a few days,” Strummer later admitted, “but the more days I stayed, the harder it was to come back – because of the more aggro I was causing that I’d have to face.”

Instead, Strummer shacked up in Paris with his girlfriend Gaby Salter, grew a beard, hung out at the local pubs – and then, on a lark, reportedly ran in the city’s annual 26-mile foot race.

“I thought it would be a good joke if I never phoned Bernie at all,” Strummer said in Julien Temple’s 2007 film The Future Is Unwritten. “He was going to be thinking, ‘Oh, where has Joe gone?’ … And I ran the Paris Marathon, too. And eventually, they hired a private detective to find me.”

If Strummer’s mohawk-sporting punk-rock appearance didn’t exactly fit a runner’s profile, his prerace regimen certainly checked out: “Drink 10 pints of beer the night before the race – ya got that?” Strummer later told a curious reporter. “And don’t run a single step at least four weeks before the race.”

Strummer was a famously unreliable narrator. In The Future Is Unwritten, for instance, he blatantly reformulates his subsequent firing of Headon. “While I was playing hooky, everybody had a row,” Strummer says, “and Topper just decided that he obviously didn’t think I was ever coming back – and he decided to cut out.” Strummer wasn’t found by a private detective. Instead, Kosmo Vinyl – a hanger-on who was once described as the Clash’s “art director” – eventually tracked him down. It’s unclear if Strummer ran in the Paris marathon, though he did take part in its London counterpart.

“The official version was, like, they had to make an event to create publicity which would help to sell more tickets, but Joe never mentioned that to me,” said Richard Schroeder, a Parisian photographer who struck up a friendship with Strummer. “What he told me was that it was mainly the drug problem with Topper. So it was more about the problems with the band, and Joe wanted to be out of that for a while, to have a chance to think about it properly.”

Two days after the race, Strummer was back in London. But the problems he’d quite literally been running from remained. Early-era Clash drummer Terry Chimes took over for Headon, after a particularly awful May 20, 1982, show at Holland’s Lochem Festival.

“I don’t think, honest to God, we ever played a good gig after that – except for one night in New Jersey,” Strummer told Uncut. “We played a good one, but I reckon that was just by the law of averages. Out of a 30-gig tour, one night was OK. You’ve got to say it’s a fluke.”

It didn’t help that the Clash ended up opening for the Who on what was billed as their farewell tour. Strummer felt like he was peering into his sad future.

“We did eight gigs in super-stadiums, all the biggest joints – L.A. Coliseum, Oakland Coliseum, Shea Stadium,” Strummer remembered. “I realized that was where we were heading and it didn’t look good. We just had to crash and die. I never said nothing to nobody about it, but I was in deep shit with that in my mind.”

Chimes left again, then Strummer fired Jones. The Clash released one more album, 1985’s lightly regarded Cut the Crap, before limping to the finish line. Strummer’s trip to Paris was the beginning of the band’s end.

“I found a letter that I wrote at the time to Joe about his disappearance,” Headon told Classic Rock, “and in the letter, I say, ‘I understand your unhappiness with the way the band is.’ I admitted I wasn’t getting on with [bassist] Paul [Simonon], and it was all pretty chaotic. I was saying that if he came back, I’d get my act together – but of course, I never sent it to him, because we had no idea where he was.”

You’ll find some familiar names, but also bands that didn’t sell as many records while having just as much impact.