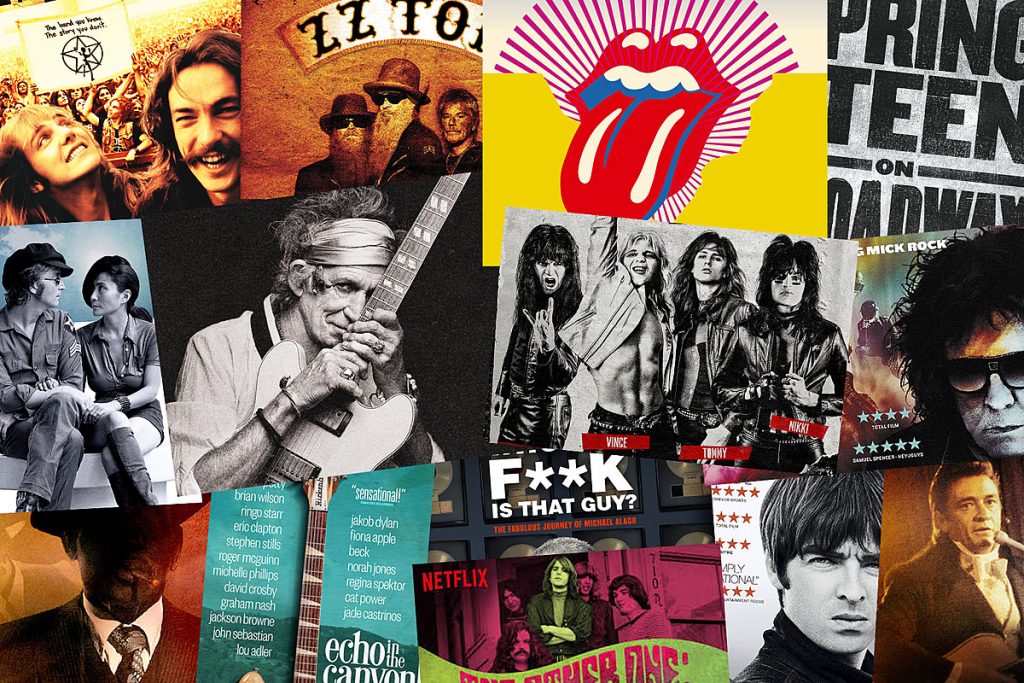 Looking for something new to watch on Netflix after catching up on your favorite series?

As it turns out, there’s a ton of classic rock-themed programming on the popular streaming service. In addition to The Dirt, the film adaptation of Motley Crue‘s book that debuted in 2019, it’s easy to find plenty of other movies, including documentaries and concerts, about some of your favorite artists. Check them out below.

Motley Crue turned their 2001 book into a feature-length film and released it on Netflix. The soundtrack to The Dirt featured four new songs by the band, and its success prompted an increase in exposure to the Crue’s music – a huge reason for their decision to tour in 2020.

Director Paul Dugdale brought cameras along when the Rolling Stones made their way across Latin America in early 2016. Ole Ole Ole! focuses on their devoted fan base in Argentina and their first-ever concert in Havana. The documentary was screened in theaters for one night in December 2016 and released on home video six months later.

The 50-year history of ZZ Top is documented in That Little Ol’ Band From Texas. In addition to the band, director Sam Dunn spoke to well-known fans like Billy Bob Thornton and Josh Homme. There’s also a performance in Texas’ famed Gruene Hall shot exclusively for the film.

Originally shown in theaters and then broadcast on PBS as part of its American Experience series, Woodstock: Three Days That Defined a Generation catches up with people who attended the 1969 festival. This 50th-anniversary celebration takes a look at how that weekend shaped their lives.

Based on the memoir of John Lennon‘s half-sister, Nowhere Boy tells the story of the late legend’s teenage years, when he was raised by his aunt and uncle, learned how to play guitar and formed the Quarrymen, who later became the Beatles. The movie stars Aaron Johnson as Lennon and Kristin Scott Thomas as his aunt, Mimi Smith.

The history of Rush up through 2010 is captured in the documentary Beyond the Lighted Stage. Co-directed by Dunn and Scot McFadyen, the movie features lots of archival footage, and interviews with the band and famous fans like Gene Simmons and Trent Reznor.

Bruce Springsteen‘s Tony Award-winning show is captured in private performance at New York’s Walter Kerr Theater. It debuted on Netflix upon the conclusion of the show’s Broadway run. The movie was nominated for two Emmy Awards, for Outstanding Variety Special (Pre-Recorded) and Outstanding Directing for a Variety Special.

John Edginton’s Documentary chronicles Joe Cocker‘s rise from a blues-singing gas fitter in Sheffield, England, to his explosion at Woodstock and beyond. Mad Dog With Soul includes testimonies from Billy Joel and Rolling Stone‘s Ben Fong-Torres.

Keith Richards: Under the Influence (2015)

As Keith Richards recorded his solo album Crosseyed Heart, he allowed director Morgan Neville to film the proceedings and get a look into the Rolling Stones guitarist’s life. Under the Influence premiered at the Toronto International Film Festival before debuting on Netflix the day of Crosseyed Heart‘s release.

27 Gone Too Soon explores the members of the “27 Club” – musicians ranging from Jimi Hendrix and Janis Joplin to Kurt Cobain and Amy Winehouse – who died at the age of 27. It looks to understand how the trappings of fame affected them, both during their lives and as cultural icons frozen in time.

Named after a song from Chicago‘s second album, Now More Than Ever debuted on CNN on New Year’s Day 2017 before eventually going to Netflix. Director Peter Pardini uses archival footage and contemporary interviews to gain insight into the story of the band, from its start at Chicago’s DePaul University through the death of guitarist Terry Kath and their ’80s soft-rock redefinition.

Netflix’s music documentary series ReMastered devoted an episode to Johnny Cash‘s performance at the White House in 1970. At the time, Cash was questioning the Vietnam War in song and the government’s responsibility to the less fortunate while Nixon was looking to connect with Middle America

SHOT! The Psycho-Spiritual Mantra of Rock (2017)

Photographer Mick Rock’s life behind the camera is captured in SHOT! Narrated by Rock, the documentary details his career shooting legends like David Bowie, Queen and Lou Reed.

Directed by Michael Epstein, Above Us Only Sky uses previously unseen and unheard footage in telling the story of John Lennon and Yoko Ono in 1971, as they were making his Imagine album and her Fly. The movie includes the first demo Lennon made for “Imagine.”

Who the F**k Is That Guy: The Fabulous Journey of Michael Alago (2017)

While working for Elektra Records, Michael Alago signed Metallica. Who the F**k Is That Guy tells the story of his life and career, in which he worked with artists as diverse as Cyndi Lauper, Nina Simone and John Lydon.

The title of Mike Fleiss’ documentary about Bob Weir refers to his standing as the second guitarist in the Grateful Dead. The Other One features interviews with Weir, the surviving members of the Dead and friends like Sammy Hagar.

Narrated by Jakob Dylan, Echo in the Canyon details the birth of the Los Angeles folk-rock scene of the mid-’60s – namely, the Byrds, Buffalo Springfield and the Mamas and the Papas. It includes footage from a concert of contemporary artists covering songs from that period and one of the last interviews with Tom Petty.

Named after Oasis‘ first single, Supersonic chronicles the rise of the ’90s Britpop band – from Liam and Noel Gallagher‘s childhood up through the group’s 1996 Knebworth concert in front of 250,000 people. Much attention is paid to the brothers’ legendary feuding and drug use that drove Oasis apart.

Devil at the Crossroads: Robert Johnson (2019)

Another installment of the network’s ReMastered series deals with blues legend Robert Johnson. Using animation and dramatized footage, the film explores what little is known about Johnson’s life, which ended in 1938 when he was reportedly poisoned by a jealous husband.