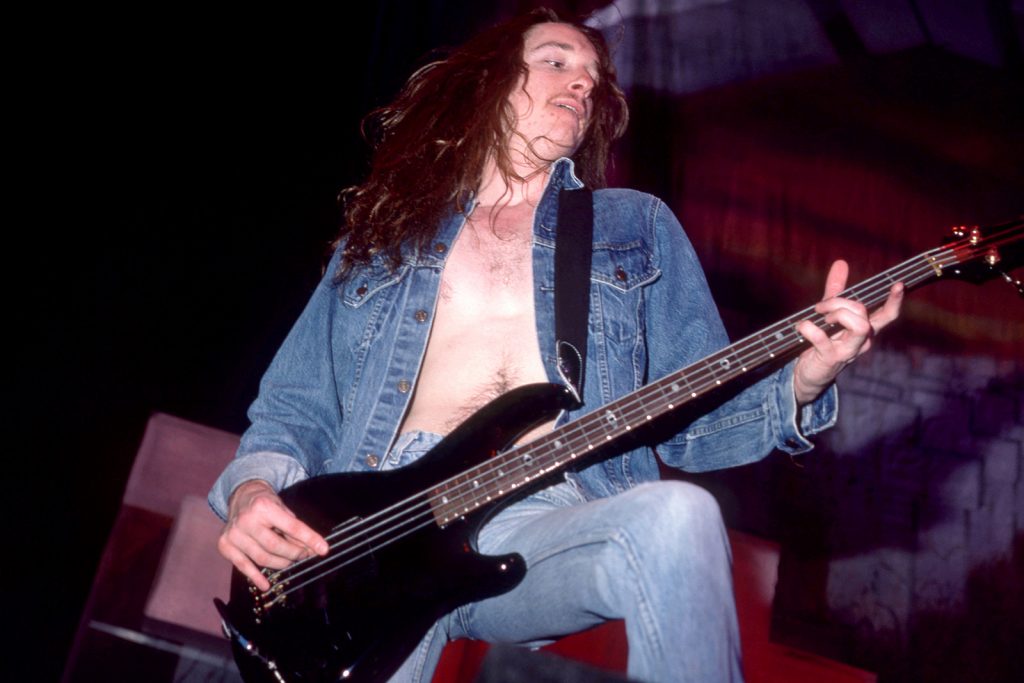 In the early morning of Sept. 27, 1986, Metallica lost bassist Cliff Burton when their tour bus crashed during a trip across Europe. It meant that the previous evening’s show, at the Solnahallen in Stockholm, Sweden, would become remembered for being Burton’s final performance. Before tragedy stuck, the gig would have been remembered for something positive.

The rising-star thrashers – who’d recently released the groundbreaking Master of Puppets – had already endured some difficulties on their Damage, Inc. tour. Frontman James Hetfield had broken his wrist in a skateboarding accident, rendering him unable to play guitar. At the 17-song Stockholm show, he’d managed to strap on a six-string for the band’s last song of the night, “Blitzkreig.” The full show, as released on the Master of Puppets box set in 2017, can be heard below.

“We’d finished playing all the Odeons in England, which are these old, 3,000-seat movie theaters,” drummer Lars Ulrich told Rolling Stone of the band’s 1986 European tour. “[W]e got to Scandinavia where they were more like ice-hockey holes – smaller, colder, darker. It was a different vibe. We played the show in Stockholm, and it went incredibly well. I think it may have been a rare case where we actually played an additional song that wasn’t on the set list, because the show was so good. That’s not something we did a lot then or now. So there was a good vibe.”

Guitarist Kirk Hammett recalled the positive emotions when Hetfield was able to take back guitar duties from roadie John Marshall, who’d been covering for him. “I remember the five of us, including [John], being really stoked James was back and playing and looking like was gonna make a pretty healthy recovery,” he said. “I distinctly remember that show being good, and the feeling when we got offstage was really great and positive and forward-looking. Like, ‘Great, James is back in and it won’t be long ’til we’re back to our old selves again.’”

The whole day had been an enjoyable one, Ulrich said. “We did a lot of press […] and we did a photo shoot for a Swedish magazine called OK, which was almost like a teenybopper magazine. We were sitting on the bus afterwards, talking about how cool it was, and Cliff and I were hanging out, having a beer. It’s a little fuzzy now, but it was a good day.

“I remember right when we were about to leave in the bus, the fans started running towards us,” Hammett added. “And Cliff said, ‘Look at them. They look like zombies!’ He was way into zombies. We were all just kind of laughing. Then we started playing cards. And we had a long, long drive. And everyone knows the rest of it.”

The sudden change in the lineup was more than just a question of finding another musician. Burton’s personality and creative flair were embedded deep into Metallica’s structure. It’s often been argued that his laid-back character presented the perfect foil to the high-energy attitudes of Hetfield and Ulrich. It was he who’d told them that if they wanted him to join in 1982 they’d have to move from L.A. to San Francisco – an idea that had already occurred to them and which became a key part of their development. On Master of Puppets he’d provided the structure and drive for the instrumental track “Orion,” a piece that underlined his contribution to the quartet’s power and energy. He’d even been instrumental in having Marshall appear on stage while covering for Hetfield, each night forcing the roadie to come out from behind the scenes after a few songs, until everyone agreed the concerts should begin with him already in sight.

In an interview a few months before his death, Burton had said he avoided thinking too much about what the future held for Metallica. “I try not to speculate about those sort of things, you know; that way, I can’t be wrong if I don’t make a guess about it,” he explained. “[W]e try our best and we’ll take it as far as we can, do what we can and see where it takes us.” He said of their story so far: “I think you could safely say we’ve matured musically, if not any other way, a bit over the past three years. And there’s a lot more at stake now.” He identified the Master of Puppets title track as his favorite song to date, observing: “[E]verything’s kind of growing a bit. It’s progressing.”

In the aftermath of the bus crash, Hammett remembered feeling like the band had fallen into a “deep, black pit,” while Ulrich said they’d begun work on replacing Burton partly as a means of remaining active through their grief. “[W]e didn’t know what was up, down or sideways, and we decided that the smartest thing we could do was to keep going,” he explained. “We laid Cliff to rest a week or two after the accident, and then there wasn’t five minutes after that because if we slowed down, we were afraid we were going to disappear into nothingness […] So I called a few people […] And we set up auditions the week after Cliff’s funeral.”

Metallica settled on Jason Newsted as Burton’s replacement and went on — with difficulty — to become the metal giants they remain today. But Burton has always remained part of the band’s identity and legacy, Ulrich insisted, and it comes home to him when he listens to the Stockholm recording. “[Y]ou pause, you reflect, you think, you appreciate, you’re humbled,” he said. “I move so fast through a lot of the stuff that I never slow down long enough to reflect. And occasionally, when you sit with some of the stuff at 2 o’clock in the morning, you go, ‘Wow.’ When you sit there and listen to the last two songs or look at the pictures from the last show with him, it stops you in your tracks as you deal with it.”

He added: “So with things like that, you pause for a second and think of all the craziness and ups and downs and how much we miss Cliff, but also how fortunate we are to still be out here doing it and that people still care.”