‘Columbo’ Does More Than Debut a Crafty Sleuth 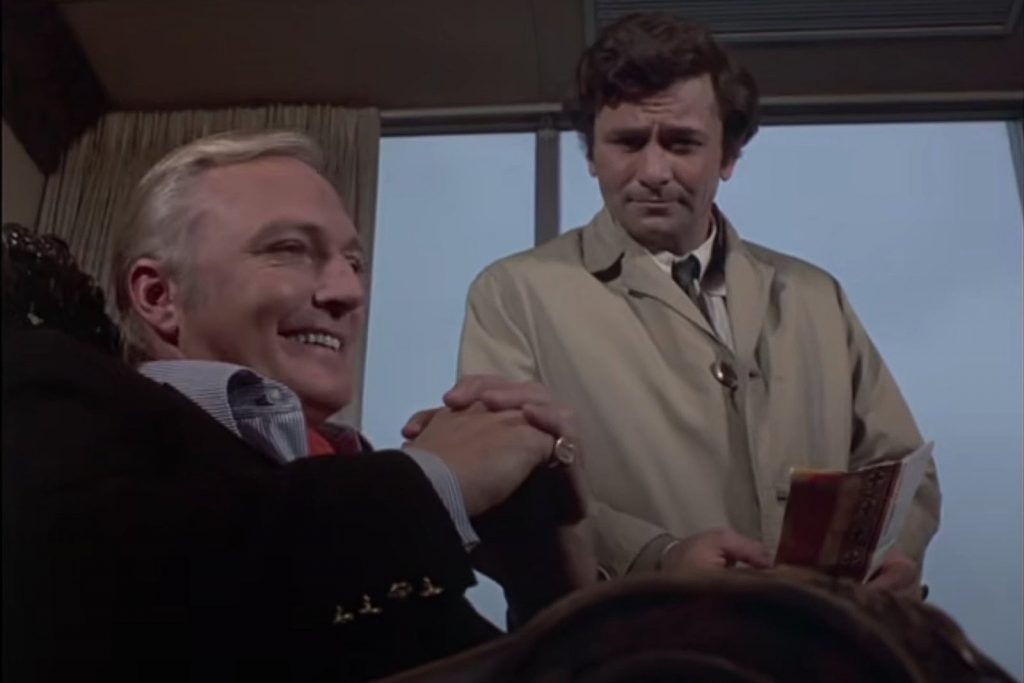 “Murder by the Book” launched a series that made the rumpled detective Columbo into a cultural icon. It also provided career foundations for Steven Bochco and Steven Spielberg, a pair of youngsters who would alter the landscape of TV and film.

Star Peter Falk came into the Sept. 15, 1971, premiere with his own rumpled raincoat, his own clunky shoes – and his own glass eye, the result of a childhood bout with cancer. He also had his own ideas.

“It was somebody that I immediately wanted to play,” Falk told NPR in 1995. “The basic thrust of a guy appearing less than he actually is, that was always there – and that disarming quality of not ever appearing formidable was always there.”

The trick, Falk once mused, was that “you feel sorry for him. He appears to be seeing nothing, but he’s seeing everything. Underneath his dishevelment, a good mind is at work.”

Falk pulled these disparate strands together to form a character who was unfailingly polite, seemingly puzzled and often impishly humorous. Yet Columbo always found a way to solve the series’ mysteries with a cunning guile – typically after turning to utter his familiar catchphrase, “just one more thing.”

“Murder by the Book” helped forever link Falk and Columbo, but this was hardly his first role. In fact, Falk came to the attention of Columbo creators Richard Levinson and William Link after years of TV, movie and stage work. Still, in many ways, it was the role he was born to play.

“I have a theory,” Link told Mystery Scene in 2010, “that in [this] one man, you have both Sherlock Holmes and Watson. There’s the intellectual, the very clever, great detective Sherlock Holmes – and then you have the everyman Watson. And those two are combined, with Falk as the character.

“He’s a regular Joe: He’s the kind of guy you sit down, have a drink, a cup of coffee with; he’s very open — but also hidden behind that is the computer brain for detection, and that’s the Holmes part of it,” Link added. “He’s the regular working-class guy who’s got a brilliant mind but doesn’t really tout it, you know? He’s humble, even to the murderer! And people identify with that; they like that. And also, they like Peter. I mean, let’s face it.”

Falk grew up north of New York City in Ossining, the son of a dry-goods store owner. He held some rather surprising jobs after college, including cook in the merchant marines and efficiency expert for the Connecticut State Budget Bureau, before getting finally getting bored enough to pursue his acting dream on theater stages and then onscreen.

A bartender role in a 1956 off-Broadway production of The Iceman Cometh sparked wider attention, and within a few years Falk had collected two Oscar nominations for best supporting actor in 1960’s Murder Inc. and 1961’s Pocketful of Miracles. He’d also earned an Emmy for his work on TV’s The Price of Tomatoes.

Falk’s most celebrated early roles were often henchmen, tough guys and heavies. But he also appeared in a number of comedies, among them 1963’s It’s a Mad, Mad, Mad, Mad World, 1965’s The Great Race and 1967’s Luv. Columbo joined the two impulses, as Falk made his debut in a pair of tentative TV movies before finally getting underway with the Spielberg-directed “Murder by the Book.”

This first episode, airing as part of The NBC Sunday Mystery Movie series from 1971-78, found a pair of mystery-writing partners coming to a bad end. “Murder by the Book” also marked the first of three appearances by Jack Cassidy as guest murderer. Link once said he thought Cassidy’s ability to convey a “preening arrogance” made him the perfect foil for Columbo.

Bochco simply wrote around the unforgettable quirks that Peter Falk employed to round out the script. Falk was deeply involved with creating the character, but also with scene settings and plotting. “It was a wonderful lesson,” Bochco told the Archive of American Television in 2002, “in letting the actor fill the role.”

Bochco created scripts for “Lady in Waiting” and “Blueprint for Murder” for the Columbo series, before moving on to groundbreaking television work in Hill Street Blues, L.A. Law and NYPD Blue – shows that, in many ways, set the stage for the Peak TV era.

“In that first year, when [Falk] was nominated for best actor, he won,” Bochco added. “And when he went up, he made this wonderful speech in which among other things, he thanked me by name and it really sort of put me on the map.”

Watch Columbo Solve the Crime in ‘Murder by the Book’

On the other hand, the then-25-year-old Spielberg didn’t make much of an impression at first. “When he showed up on the set the first time, someone said to me, ‘There’s young Spielberg,”‘ Falk later remembered. “I said, ‘Where’s his father?'”

But Levinson and Link were adamant about giving Spielberg the chance to help launch Columbo. Spielberg’s success with this episode led directly to the opportunity to direct 1971’s Duel: Producer George Eckstein actually gave Spielberg the movie based on reviewing the rough cut of “Murder by the Book,” which hadn’t even aired yet on NBC.

“I caught a huge break when Bill and Dick trusted a young, inexperienced director to do the first episode of Columbo,” Spielberg told Deadline in 2020. “That job helped convince the studio to let me do Duel, and with all that followed I owe Bill so very, very much.”

A career that would include Jaws, E.T. the Extra-Terrestrial, Schindler’s List and Saving Private Ryan was underway. Those later successes were no surprise to Falk, who came to greatly admire “Murder by the Book.” In fact, he reportedly told the show’s producers back then that Spielberg was “too good for Columbo.”

Falk would try other roles, appearing in 1976’s Murder by Death, 1979’s The In-Laws, 1987’s The Princess Bride and 1992’s The Player. He also continued to collaborate with director John Cassavetes, making several ’70s-era films. But, in the end, Falk was Columbo, and Columbo was Falk. He returned to the character for occasional films on ABC beginning in 1989 and continuing through 2003.

Falk collected a fourth Emmy for Columbo before dying in 2011 after a battle with Alzheimer’s. He’d already made peace with his acting journey.