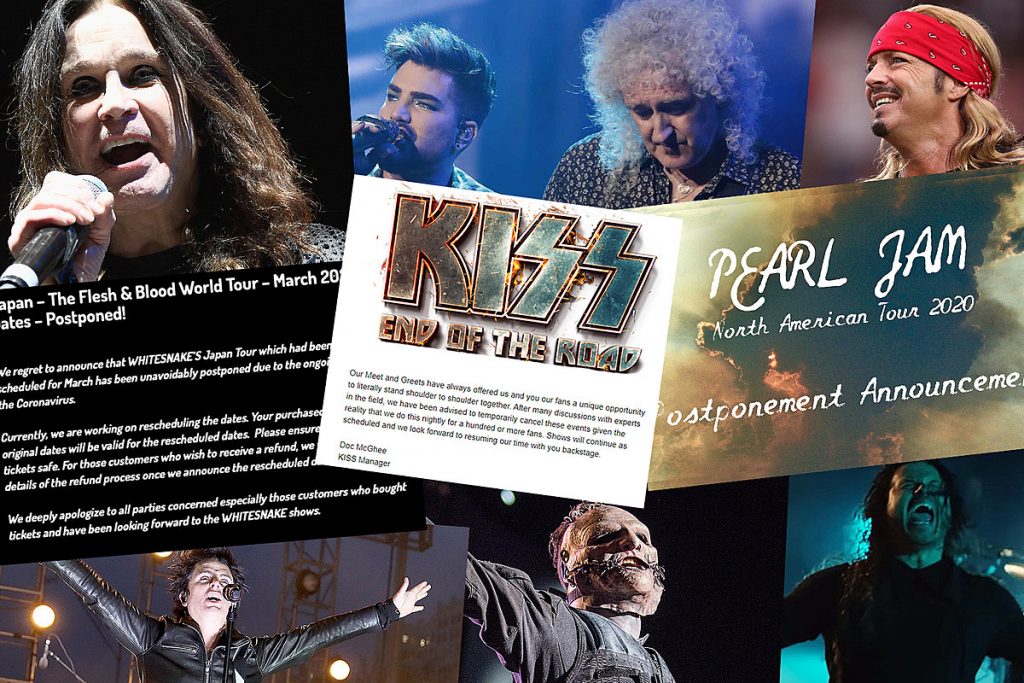 Fears over the spread of the coronavirus have caused many acts to change their tour plans, particularly those scheduled for Europe and Asia.

Entire legs of tours by Pearl Jam, Green Day, Whitesnake and others have been postponed, while Sons of Apollo and Bryan Adams were in the midst of tours, only to have shows canceled.

Additionally, a Queen + Adam Lambert date in Paris was postponed, but Van Morrison found a creative way around a suggested ban on gatherings of more than 1,000 in France.

The virus is also affecting the festival industry, with the entire South by Southwest Conference and Festivals, which included appearances by Ozzy Osbourne and Trent Reznor, canceled for the first time in its 34-year history. The Coachella Valley Music and Arts Festival is also considering pushing back its annual event six months.

If your concert plans have been affected, please check the acts’ website or official social media feeds for information regarding refunds and rescheduled dates.

On March 10, Santana announced they were canceling the entire European leg of their Miraculous World Tour, which was scheduled to take place between March 14 and April 5. “While we deeply regret this unfortunate circumstance, the safety of our fans is the main priority for the Santana Organization,” read a statement on the band’s website. “We will keep you all informed of new performance dates as they are made, and will make every effort to return to Europe soon. Thank you all very much for your understanding.”

As February came to a close, Green Day announced that they were postponing the Asian leg of their Hella Mega tour with Weezer and Fall Out Boy “due to the health and travel concerns with coronavirus.” The three bands, which will play stadiums across Europe and North America this summer, were scheduled to perform nine shows in Singapore, Thailand, the Philippines, Taiwan, Hong Kong, South Korea and Japan throughout March.

Sons of Apollo – a band consisting of former members of Guns N’ Roses, Dream Theater, Journey and Mr. Big – scrapped the remaining dates on their European tour because of the disease. In a statement, they said it had “escalated to a point where governments have decided to shut down venues, restrict events, limit flight destinations, with no certainty for us and our promoting partners and that our shows can be guaranteed to happen.” While they acknowledged the financial impact the decision would have on them, they agreed that “this is a time where health comes first and we will not endanger band and crew, nor fans.”

Whitesnake’s Flesh & Blood tour of Japan was “unavoidably postponed due to the ongoing threat of the coronavirus.” They stressed that fans should keep their tickets safe, because they’d guarantee entry into the rescheduled shows.

Slipknot had been booked to play throughout Asia, including the two-day Knotfest Japan – but the fest is now off until further notice. Slipknot’s statement stressed that the health of the fans, band and crew forced them into “the only responsible decision that could be made.”

Queen + Adam Lambert were forced to reschedule their May 26 date at Paris’ AccorHotels Arena because the French government, in an attempt to contain the spread of the disease, canceled all events in indoor venues with a capacity larger than 5,000 people until May 31. The group said none of its other concerts would be affected at the time.

The annual South by Southwest festival in Austin was canceled after many of the corporations and artists involved, including Ozzy Osbourne and Trent Reznor, pulled out. Neither musician was scheduled to perform: Osbourne was planning to attend the premiere of a new documentary about his life, while Reznor was to discuss his work on the HBO series Watchmen.

With a week remaining in a U.S. leg of their End of the Road farewell tour, Kiss announced that, while shows would continue, they were canceling all VIP packages that offered a meet-and-greet photo opportunity. Fans were notified via email that contained a letter from manager Doc McGhee, who added that refunds for the amount of the VIP upgrade were imminent.

Pearl Jam became the first major rock band to postpone a U.S. tour due to the outbreak. “As residents of the city of Seattle, we’ve been hit hard and have witnessed firsthand how quickly these disastrous situations can escalate,” they said in a series of 10 tweets. “Our kids’ schools have closed along with universities and businesses. It’s been brutal and it’s gonna get worse before it gets better.” They also cited the lack of “clear messages from our government regarding people’s safety and our ability to go to work” as a reason to believe that it will soon be under control. The band’s month-long tour of Europe, beginning in late June, is scheduled to go on.

Poison singer Bret Michaels canceled his performances aboard the ’80s Cruise after the Centers for Disease Control advised that “cruise ship travel be deferred for those with compromised immune systems.” Michaels has Type 1 diabetes and “falls under the category of those that run the extreme high risk of contracting this illness.” Plus, the statement added, if the ship were to be quarantined due to an outbreak, there would be a risk of Michaels running out of insulin and other supplies needed to manage his diabetes.

As his European tour came to a close, Bryan Adams had five shows in Norway and Denmark postponed by local authorities. Adams also postponed three dates in Sweden that were sandwiched between them. The Norway and Sweden concerts have been rescheduled for late May.

With the French Minister of Solidarities and Health recommending banning gatherings of more than 1,000 people, Van Morrison figured out a way to not cancel his March 9 show at the Paris’ L’Olympia. He split the night in two, asking those who could arrive early to show up for a 7:30PM set, which would be followed by another performance two hours later.

The organizers of the Coachella Valley Music and Arts Festival in Indio, Calif., were reported to be preparing to move the event from two weekends in mid-April until mid-October. This year’s festival is to be headlined by Rage Against the Machine, Travis Scott and Frank Ocean.

The band’s concert at Estadio Ricardo Saprissa Ayma in San Jose, Costa Rica, has been canceled after the Ministry of Health, along with the National Emergency Commission, canceled all massive events and activities.