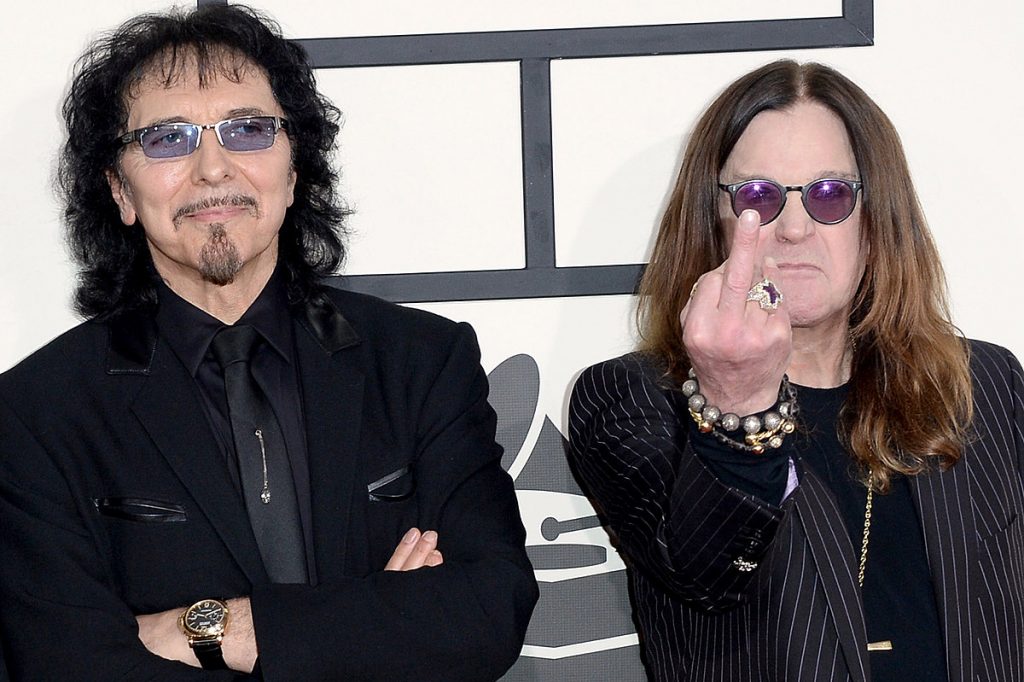 Tony Iommi said the coronavirus pandemic has brought him and former Black Sabbath bandmate Ozzy Osbourne closer together, 18 months after comments by Osbourne suggested there may have been a rift between them.

“I’ve washed the car, cleaned the garage out, done all those little jobs that you realize needed doing, just like everyone else,” Iommi told the Birmingham Mail, adding that he and wife Maria have been binge-watching TV and he’s been playing guitar. “It’s a bit like being on tour, without getting out to play. You’re stuck in the room each night. Neighbors have dropped a note through the door, asking if I want any shopping. They’re looking out for the poor old sod! I think this has brought us all closer. I’m even in touch with Ozzy every day as he gets over his own health problems in L.A.”

Meanwhile, Neil Young, Willie Nelson, Dave Matthews and others announced their appearance at a home-based edition of Farm Aid to take place on April 11 and aired on AXS TV and the Farm Aid website. “On the Farm Aid stage last September, my friend and fellow board member John Mellencamp said, ‘Be hopeful about, have faith in and be grateful for right now – the miracle of life is in the dirt under our farmers’ fingernails,'” Nelson said. “He was right, and I’m so grateful for the farmers, ranchers and farm workers who are on the front lines sustaining all our communities. Now, more than ever, stay strong and positive.”

Megadeth bassist David Ellefson streamed a new solo song, “Simple Truth,” with all profits to be donated to the Italian Red Cross when it’s officially released on April 17. The track was written and partially recorded in Italy; Ellefson’s organization has other links with the nation, which is one of the worst-hit in the world. “It’s absolutely devastating to see what the country is going through right now,” he said recently. “The people, and its culture, have been so welcoming to me over the years that i’m honored to do anything I can to give something back to them during this time of need.”

Henry Rollins streamed the first in a series of radio shows recorded from lockdown titled The Cool Quarantine. He describes the program as “completely indulgent” and “fanatic,” featuring “personal stories, deep cuts, rarities, bootlegs, full albums, EPs and much more.” You can hear the opening episode at the KCRW website.

Melvins leader Buzz Osborne said he was spending his lockdown time preparing for when it would be over. “I’m working on a lot of album and CD packaging with the idea that I can sell it when I am finally able to play live again,” he told Rolling Stone. “Playing live again is a weird concept at this point. … We’re putting together pretty much every possible thing we can. We might as well, considering it’s house arrest for almost the whole world. … I usually play a lot of golf when I’m home, but that’s not happening. If I can’t play live shows in the near future, I’ll be looking forward to playing golf and recording new music. I have plenty of that ready to go.”

Archive live performances by the Grateful Dead will be streamed on their YouTube channel every Friday starting this week. Titled Shakedown Stream, the first release will be Truckin’ Up to Buffalo, recorded at New York’s Rich Stadium on July 4,1989.

Radiohead announced similar plans, with one live show per week to be added to YouTube every Thursday. “We will be releasing one a week until either the restrictions resulting from current situation are eased or we run out of shows,” the band said in a statement. “Which will be first? No one knows.” The opening episode, Live From a Tent in Dublin, was recorded in Ireland on Oct. 8, 2000.

Apple Music launched a $50 million advance royalty program with the intention of insuring that artists don’t have to wait for money they’re owed from the streaming platform. The cash will be paid to independent labels that already have a deal with Apple, to be passed on to those who have a deal with the labels. “These are difficult times for the music industry globally,” read a message from Apple (via Rolling Stone). “Livelihoods are at risk, with multiple sources of income that our industry relies on vanishing overnight. Apple has a deep, decades-long history with music, and we are proud to be in close partnership with the best labels and artists in the world. We want to help.”