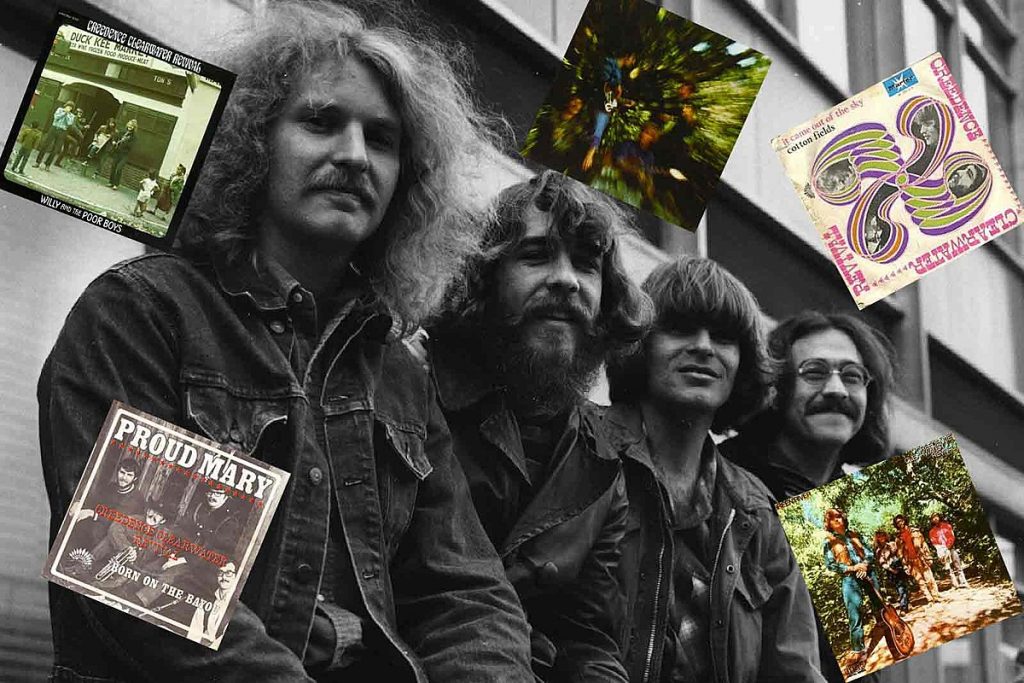 The late ’60s were a great period for many artists. The Beatles and Bob Dylan both had long runs of great records, and the Rolling Stones started one that carried over into the ’70s.

In the span of less than 12 months, the San Francisco band released three classic albums. Bayou Country was the first to arrive in early January, followed by Green River in August and finally Willie and the Poor Boys in November.

In that time, they also released seven singles from those records, three of which made it to No. 2 on the chart. Green River was the only album to reach No. 1, a spot it held onto for four weeks. (Bayou Country topped out at No. 7, while Willy and the Poor Boys climbed to No. 3 for six weeks. Each of the albums spent more than a year on the chart.)

The band also played the history-making Woodstock festival a few weeks after Green River‘s release and also started putting together songs for its fifth LP overall, Cosmo’s Factory, which came out in July 1970, spent nine weeks at No. 1 and spawned two more singles that stalled at No. 2, “Travelin’ Band” and “Lookin’ Out My Back Door.”

John Fogerty, their singer and songwriter, found a groove in 1969 and rode it out through 26 songs in about 98 minutes, not quite forming a song cycle in the process but definitely hitting on a theme that strings together all three albums. There’s political commentary here, some throwback ’50s-style rockers, story-songs, a few choice covers and a grand sense of moving proudly out of step with the times.

While other artists were indulging in 25-minute psychedelic jams, Fogerty led CCR through sharply focused rock ‘n’ roll songs that have stood the test of time. (Not that they didn’t drift into that territory occasionally too, but Creedence’s variation on those songs were even more firmly constructed than most of their contemporaries’.)

Creedence lasted until 1972, when their seventh and final album, Mardi Gras, was released to diminishing returns. There was no way to top 1969; few, if any, artists have even come close since then. You’ll see what we mean in the below list of Creedence Clearwater Revival 1969 Songs Ranked Worst to Best.

By the end of 1969, Fogerty had to start feeling the fatigue that came with his busy year. CCR’s third and final album of a productive 12 months, Willy and the Poor Boys, included two instrumentals. Both were originals, both were kinda slight. This is the weaker of the two.

Buried in the middle of Side Two of Green River, “Cross Tie Walker” is referenced in the album’s title track (“Up at Cody’s camp, I spent my days with flat-car riders and cross-tie walkers“) but is less memorable here as a rockabilly-style throwback. It’s not bad, but it gets lost among the album’s more classic tracks.

Like Green River‘s “Cross Tie Walker,” Bayou Country‘s “Penthouse Pauper” is buried on the album’s second side and doesn’t really add anything to the record. It’s a credible enough blues rocker from the period penned by John Fogerty, and the band rolls through it with a dash of grit, but other similar album tracks are far more interesting.

Like the song that precedes it on Green River, “Cross Tie Walker,” “Sinister Purpose” is a fairly typical swamp rocker that tends to slip into the background. Still, Creedence did this sorta stuff better than any other band of their generation, so it sounds like it belongs on the album, even if its isn’t exactly a standout track.

Like the debut album’s Side One-closing “Suzie Q,” “Graveyard Train” ends the first part of Creedence’s second LP with another eight-and-a-half-minute jam. It doesn’t really go anywhere, but it easily slips into Bayou Country‘s overriding concept. Album closer “Keep On Chugglin'” does a similar thing, but better.

21. “Poorboy Shuffle” (From Willy and the Poor Boys)

Willy‘s other instrumental (see “Side o’ the Road”) makes a little more sense within the album’s context and provides a landing spot for the preceding “Cotton Fields” cover. Still, turning out three LPs in less than a year can take a toll on even the best and most professional songwriters.

Willy‘s Side One closer is basically a five-minute jam based on the song’s title repeated a couple dozen times. It’s sort of an extension of the preceding “Poorboy Shuffle,” which leads directly into “Feelin’ Blue.” Creedence were always good for at least one of these extended pieces per album, even if they occasionally overstay their welcome.

The six-and-a-half-minute “Effigy,” which closes Willy and the Poor Boys, sounds little like anything that precedes it. The jug-band exuberance the group displays on the LP cover reflects much of the music. “Effigy,” however, is more like a throwback to the bluesy, rootsy and relatively darker songs found on Bayou Country and Green River.

18. “The Night Time Is the Right Time” (From Green River)

Green River‘s only cover has a history that dates back all the way to the ’30s. A favorite among R&B artists, “The Night Time Is the Right Time” has been recorded in various forms over the years by legends like Ray Charles and James Brown. CCR’s spirited version closes their second album of 1969.

Creedence could play these kind of swamp rockers in their sleep, so even if “Tombstone Shadow” is more deep cut than highlight, it manages to be an integral part of Green River. Fogerty’s writing was so tight at this point, it’s hard to tell where his songs stop and the classic covers start. A testament to his legacy.

16. “Wrote a Song for Everyone” (From Green River)

“Wrote a Song for Everyone” is Fogerty at his most reflective. While he was scoring hits as one of his generation’s best and most distinctive songwriters, his marriage was falling apart. “Wrote a song for everyone, when I couldn’t even talk to you,” he sings. It later served as the title of a Fogerty collaboration LP of CCR and solo covers.

Like “Fortunate Son,” the song that comes right before it on Willy and the Poor Boys, “Don’t Look Now” is a political song dealing with class separation. But here Fogerty turns the tables on his generation, specifically the apathetic hippies he didn’t always ideologically agree with. The song’s Sun Studio-like reverb drives it home.

Creedence’s self-titled debut album from 1968 included three cover songs. By the next album they trimmed that number to just one. The next two LPs included one and two covers, respectively, but by 1970’s Cosmo’s Factory, they upped the covers to four. Bayou Country‘s lone non-original is a rousing take on Little Richard‘s 1958 classic.

This companion piece to “Born on the Bayou” — it follows that opening cut on Bayou Country — sounds more like a coda than a fully fleshed-out song, but there’s no denying its thematic pull into the band’s second album. The LP’s first side, in fact, sounds like a swamp-rock suite. The eight-minute “Graveyard Train” rounds it out.

12. “The Midnight Special” (From Willy and the Poor Boys)

Willy and the Poor Boys features two cover songs (the other, “Cotton Fields,” is coming right up), though “The Midnight Special” is actually a traditional number in the public domain. John Fogerty adapts the song — made famous by Lead Belly, who wrote “Cotton Fields,” in the ’30s — to fit CCR’s style. It suits the album too.

11. “Cotton Fields” (From Willy and the Poor Boys)

Creedence’s three 1969 albums included four cover songs among them. This was the best. Lead Belly’s 1940 song has been recorded many, many times over the years, including a single released by the Beach Boys the same year as CCR’s take. Thematically, the folk standard fits squarely into Willy and the Poor Boys‘ concept.

One of Fogerty’s sharpest songs is seemingly a fun Chuck Berry-style rocker about a UFO. But dig deeper and “It Came Out of the Sky” reveals itself as a sly political commentary on government and religious power, and how it screws over the common man time and time again. It was even released as a single overseas.

Like many artists from the era, Creedence often saved the closing spot on their albums for an epic jam or something that may not have fit snugly on the record otherwise. (Green River‘s closing track is its only cover song, for example.) On Bayou Country, the nearly eight-minute swamp rocker “Keep On Chooglin'” brings the LP to an apt end.

One of Creedence’s loosest singles — it was released as the B-side to “Green River” but charted on its own — was also one of Fogerty’s earliest political songs to be played on the radio. He’s said “Commotion” wasn’t necessarily social commentary but merely a reflection of things going on around him. It’s not too hard to connect the dots.

“Lodi” was released as the flip side of the No. 2 “Bad Moon Rising” single four months before Green River arrived. It just missed the Top 50 on its own, but it’s become one of Fogerty’s most durable songs. He never actually visited the small California town of Lodi before he wrote it; he just knew he didn’t want to become its aging, struggling singer.

6. “Down on the Corner” (From Willy and the Poor Boys)

CCR didn’t mess around on their albums. Their singles were radio-ready and to the point, and the records’ opening tracks offered a glimpse of what was to come. Their fourth album starts with this No. 3 hit, which slyly references the LP’s title (“Down on the corner, out in the street, Willy and the Poor Boys are playin’“) and sets the path.

The opening song on Creedence’s second album (and first of 1969) pretty much serves as the record’s statement of purpose. Even though Fogerty hadn’t spent much time in the South, “Born on the Bayou,” and most of Bayou Country, are set there, both musically and thematically. A perfect introduction to the great year to come.

The title track to the band’s third album also opens the LP, and like predecessor Bayou Country‘s first track, “Born on the Bayou,” “Green River” sets the tone for the rest of the record. And while it appears to follow the Southern path of the earlier album, the song was actually inspired by a California river from Fogerty’s youth.

Like other Creedence songs, the first single from Green River has been appropriated countless times over the years in movies, TV shows and games. That hasn’t lessened the appeal of one of Fogerty’s best and most timeless songs. He’s said “Bad Moon Rising” is about an impending apocalypse, which makes it suitable for any era.

2. “Fortunate Son” (From Willy and the Poor Boys)

One of the era’s most vital protest songs wasn’t specifically written with Vietnam in mind, but there’s little doubt who Fogerty is pointing his finger at here. “Some folks inherit star-spangled eyes, they send you down to war,” he sings. The raging “Fortunate Son” is a bit out of place with Willy‘s street-corner ease, but a landmark all the same.

Creedence Clearwater Revival never had a No. 1 single; they had five that stalled at No. 2, though. This was the first of them. John Fogerty’s timeless song was an instant classic — Ike & Tina Turner took their reworked version into the Top 5 just two years later. He wrote plenty of classics, but this will be the one he’ll be remembered for.