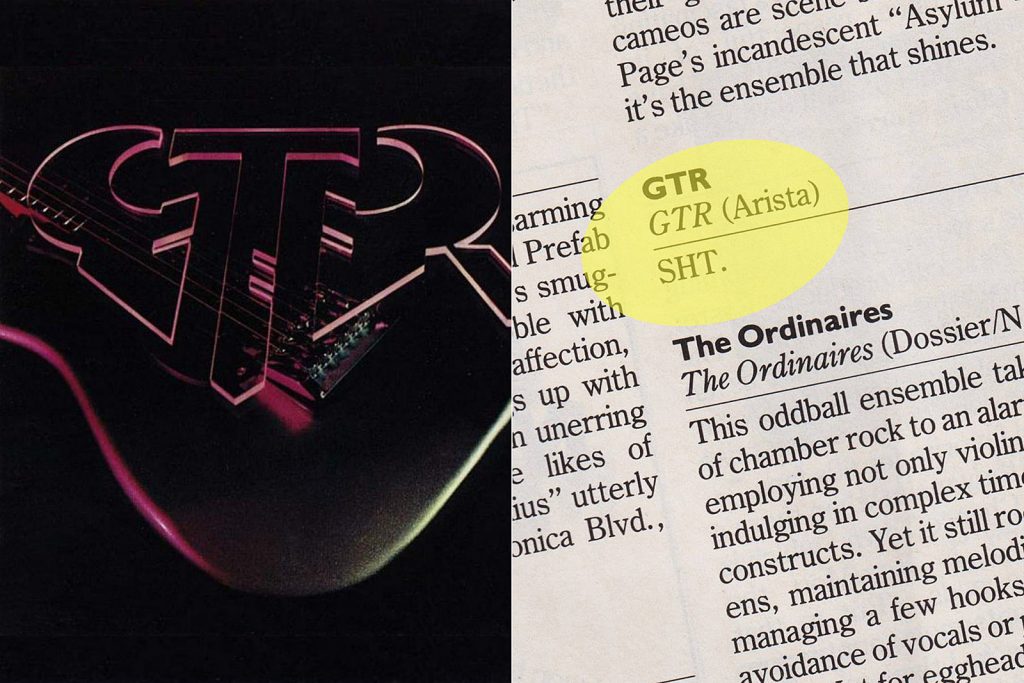 “It is weird to have the best-known thing you ever wrote not even be a full word,” music critic J.D. Considine tells UCR.

He’s reflecting on his now-(in)famous pan of GTR, the self-titled album from a shortly lived supergroup led by a pair of prog-rock Steves: Hackett (Genesis) and Howe (Yes). Considine’s review was tucked midway through a column in Musician‘s August 1986 issue — an inconspicuous home for a piece of journalism history. His assessment read, simply, “SHT” — a parodic abbreviation that’s still funnier and more fully realized than most essay-length critiques.

Considine, a staple of Rolling Stone‘s review section throughout the ’80s and early ’90s, started freelancing for Musician around 1981 — a gig that came up “purely by accident,” after editor Vic Garbarini recruited him for a last-minute interview with Carlos Santana. It’s safe to say the assignment went well: Considine wound up penning the magazine’s “Short Rock Takes” column, taking over after David Fricke left for Rolling Stone.

These snappy, quippy reviews became a staple — though most were in the 40-to-60-word range — and allowed him to survey a broad spectrum of sounds, typically of his own choosing. (His other blurbs from the GTR issue include Cajun-zydeco band BeauSoleil, synth-pop act Nu Shooz, R&B singer El DeBarge, alt-rock group Camper Van Beethoven and country giant Hank Williams.)

Considine wasn’t afraid to take aim at prog’s elite — in the same August 1986 column, he wrote a somewhat mixed review of the ELP offshoot Emerson, Lake and Powell. But he was the natural choice to tackle GTR‘s lukewarm AOR one-off, which peaked at No. 11 on the Billboard 200 and spawned a modest hit single, “When the Heart Rules the Mind.”

“I was sort of the designated ‘Genesis guy’ for Musician, but by that point it was the [trio] lineup,” he says. “I was never a huge fan of the Peter Gabriel/Steve Hackett era, simply because it struck me as being overdone. I thought it was a little too clever, a little too self-conscious, a little too wry. And Yes’ music — some of it is all right. It’s not music I would, for the most part, listen to voluntary. There were a lot of people who assume — because I wrote negative reviews of some major prog-rock artists — that I didn’t like prog-rock, which is not true at all.

“I just had very specific ideas about what I thought worked [or didn’t, like], ‘I played organ in the church when I was a kid, so I’ll do all these fancy organ things’ or ‘I studied classical music, so I’ll stick an allusion to Tchaikovsky in the music,'” he adds. “Whereas, for example, King Crimson had much more interesting rhythmic and harmonic structures built into the music, and they weren’t afraid to take chances and weren’t playing to the cheap seats — that seemed to be a more genuinely progressive approach.”

“I went back this morning and relistened to it,” Considine says. “It was really kind of a dog’s dinner of an album. There wasn’t any band sound so much. But the thing about their aesthetic — they were clearly trying for grandiosity but only achieved pomposity. What better reaction [for my review] than to just deflate what they did?”

But he didn’t initially intend to use that particular three-letter slight — it just looked better on the page. “My original thought was that, obviously, I wanted to make fun of the band name — GTR is a shorthand for ‘guitar,’ which you can find in the recording credits,” he says. “Originally my concept was to use the word ‘crap,’ but I realized if I wrote ‘CRP,’ some people might think, ‘Carp’? And dyslexic readers might even think, ‘CPR’? Whereas ‘shit,’ which admittedly seems a harsher judgment, works better as a joke. It’s clearly ‘SHT.’ You don’t look at that and think anything else.”

Considine recalls there was a “significant lag” before his extra-short take became legendary, appearing in music-critic chatter and popping up on lists of harshest reviews.

“The most common thing people would complain about,” he says, “was that it was ‘really disrespectful’ — ‘Why couldn’t you explain at length why you think the record is bad?’ To me, if you’re going to make a long argument, every writing teacher will tell you, ‘You’d better be able to sum up your idea in a sentence or two.’ And the ‘Short Takes’ essentially reduced the review to that summation … and left out the extra stuff.”

Then living in Baltimore, Considine was largely cut off from industry gossip — any negative feedback, if any occurred, would have been sent to the Musician editors. But he does recall reading Howe say he thought the “SHT” take actually helped sell the album. (Hackett, meanwhile, told UCR’s Matt Wardlaw that he didn’t hear about the review at that time. “I think that people tend to remember negative criticisms,” he said. “But I think that when you’re in the thick of it, you have to be very focused if you want to have a hit.”)

Considine has written some other memorable, miniature takedowns over the decades: “Like Right Said Fred,” he says. “My review read, ‘Wrong Said J.D.'” But the GTR piece has outlived the others for a reason — what other piece of writing packs so much thought into one vowel-less half-word?

These days, he’s “amused” that anyone still cares. “I’ve written so much stuff over the years that I barely remember any of it,” he admits. “So the fact that someone else would remember it is flattering on the verge of amazing. Reviews are what they are, and sometimes they aren’t even that.”