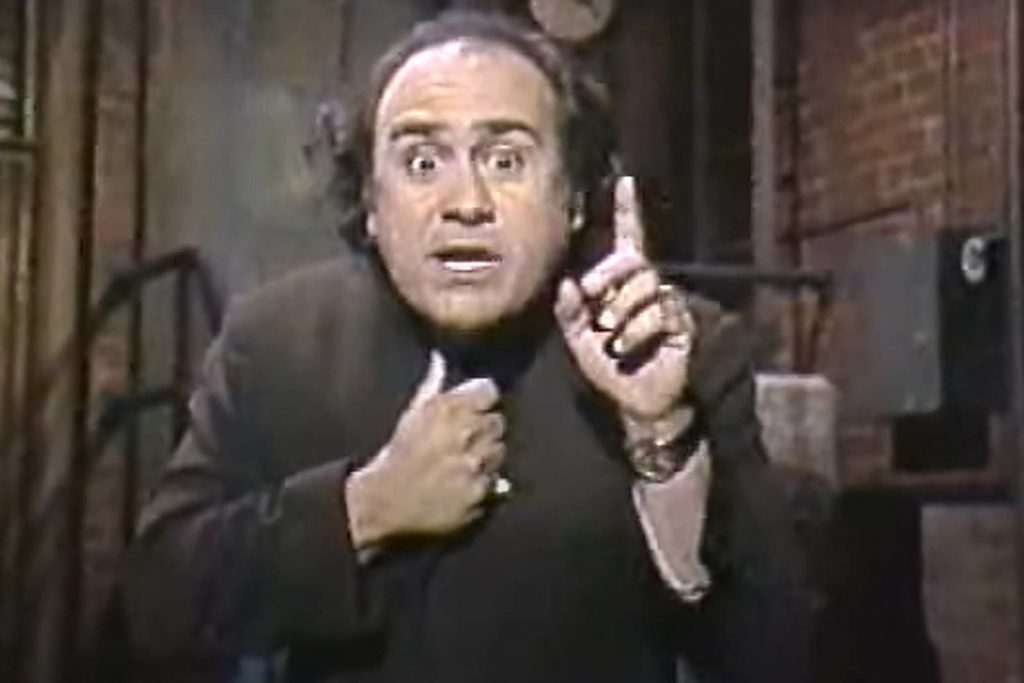 If television executives have learned one thing (and it’s far from certain that they have) it’s not to piss off Danny DeVito.

The TV veteran has never been afraid of biting the hands that have gingerly fed him during his time on such classic series as It’s Always Sunny in Philadelphia or Taxi. The diminutive but garrulous DeVito has made a career out of playing irascible, irresponsible loudmouths, mirroring the acclaimed actor and director’s willingness to take a snarky stand for something he believes in.

Just ask ABC, which found itself in the crosshairs of DeVito on his Season 7 hosting stint on Saturday Night Live. DeVito, then famous for playing unscrupulous taxi dispatcher Louie DePalma on ABC’s Taxi, had been booked to host the May 15, 1982, episode of SNL, which just so happened to fall 11 days after Taxi creator and fellow TV legend James L. Brooks was told by Anthony D. Thomopoulos, president of ABC Entertainment, that the ratings-challenged Taxi’s just-concluded fourth season would be its last.

DeVito asked SNL producer Dick Ebersol if he could use his monologue to do a little Louie-esque venting. Ebersol, to his credit, not only allowed that but went a few steps further in skewering rival ABC for canceling one of the best and most intelligent sitcoms in TV history — including airing one filmed sketch so literally explosive that it’s been edited out of the Peacock version of the episode available now.

Watch Danny DeVito in a 1982 Episode of ‘Saturday Night Live’

Kicking off his monologue, DeVito gets a shower of boos by announcing Taxi’s cancellation, putting a biting emphasis on the network that had done the deed. “That’s the American Broadcasting Company,” DeVito stressed to a new wave of sympathetic New York hostility. “A … B … C.” DeVito then produced a letter he claimed had been written to him by his Italian immigrant mother, reading, in part, “You have been besmirched by men so shallow that they do not know the depths to which their deeds have taken them,” with Mrs. DeVito purportedly concluding, “May God forgive them, but of course, we understand if He does not.”

But DeVito had an even bigger surprise for the SNL audience, as, lamenting the fact that the cast and crew were robbed of a proper “final bow” when filming what turned out to be their last episode, DeVito welcomed all of his Taxi costars alongside him in Studio 8H. One by one, DeVito brought out Andy Kaufman, Christopher Lloyd, Marilu Henner, Tony Danza and Judd Hirsch to rapturous applause and a standing ovation from the crowd. (Longtime regular Jeff Conaway was not in attendance, having been let go from the show in response to the substance-abuse issues that would plague him until he died in 2011.) Frequent Saturday Night Live provocateur Kaufman, it should be noted, sports the neck brace he wore following his recent worked-shoot wrestling match against Jerry “The King” Lawler, an infamous stunt played up throughout the night’s episode.

It’s playful (Hirsch sweeps DeVito into an embrace at the end), with just the right edge of “screw-you” to ABC. But that was nothing compared to the first sketch following the monologue, a filmed piece set to Taxi’s melancholy instrumental theme song (“Angela” by Bob James), which sees DeVito’s DePalma riding a cab to the ABC building — and blowing it up via remote detonator.

A joke about somebody destroying a very real New York City skyscraper doesn’t play in a post-9/11 TV landscape, so the 51-minute Peacock version of DeVito’s episode omits the sketch. (Two performances by the band Sparks were also cut, because of music-licensing issues.) Still, with DeVito striking a victory pose at the sound of ABC’s headquarters crumbling to dust, the destruction at least seems in line with Louie DePalma’s MO.

ABC still had one more blow coming its way: During the goodnights, DePalma brings out his actual mother, Julia. An Italian immigrant, Mrs. DeVito, shorter even than Danny and defiantly smoking a cigarette, is asked if she has another message for the people who put her son out of a job. Indeed she does, as Mrs. DeVito spits out a series of Italian curses (the words “ciucca” and “stupida” are in there for sure), while the mixed and assembled Taxi and Saturday Night Live cast members cheer in delight. Fellow Italian Danza even puts his hand over his mouth in shock before leaning in for a kiss.

Little did ABC know that its public humiliation was just beginning. Following DeVito’s episode, NBC would pick up Taxi for its fifth and final season in 1983. Even then, however, the blue-collar cabbies of the Sunshine Cab Company couldn’t catch a break. While the fifth-season order did put the series over the 100-episode mark that was then necessary for the show to be sold to syndication, NBC, too, canceled the series at the end of that season.

Perhaps taking a cue from DeVito’s gleefully spiteful example, Hirsch, after winning his second Emmy as Taxi’s longest-suffering driver Alex Reiger, mocked NBC president Grant Tinker who was sitting in the Emmy audience. (In addition to Hirsch, Taxi costars Lloyd and Carole Kane also took home Emmys on the night.) “We’re ready, Grant, we’re ready, whenever you want to put us back on,” taunted Hirsch, proving, as DeVito did before him, you don’t cross even a fictional New York cabbie, and then give him a live mic.