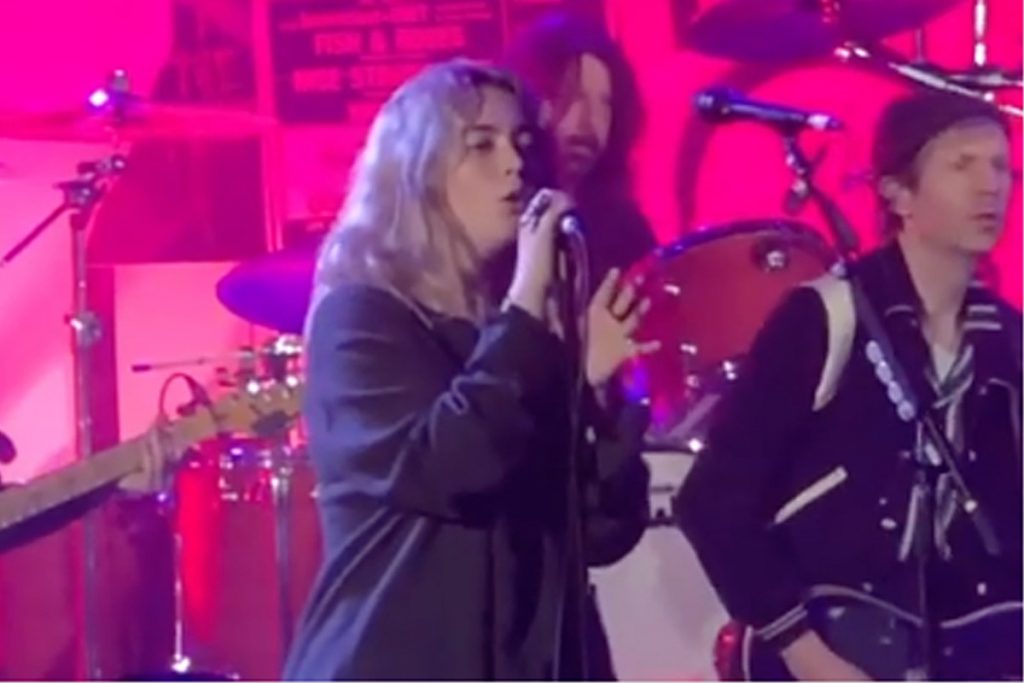 Dave Grohl‘s 13-year-old daughter, Violet, filled in for the late Kurt Cobain on Saturday during a partial Nirvana reunion show.

You can see fan-shot clips of the performance below.

Violet Grohl sang lead on Nirvana’s 1993 In Utero single “Heart-Shaped Box,” murmuring and yelping through the track’s anguished, surreal lyrics. Rounding out the band was another alt-rock veteran, Beck, and art-rocker St. Vincent, both on electric guitar.

The five-song set opened with St. Vincent fronting the 1991 Nevermind cut “Lithium.” Beck then took over for “In Bloom,” with Grohl and St. Vincent on backing vocals.

“Pretty good mosh pit right here,” Beck told the crowd before introducing 1989’s “Been a Son.” “Pretty good. I was in the most insane mosh pit of my life in this room. I remember being lifted off the floor for the entire show. It was so packed in. Then I walked out of the mosh pit, and my hands were bleeding, and I didn’t know why. And the band was Nirvana.”

The Nirvana members didn’t speak much during the show. But Grohl did introduce his daughter before “Heart-Shaped Box,” and Novoselic did say a quick round of “thank you”s toward the end of the set, including a “cheer for Kurt Cobain.”

Grohl, Novoselic and Smear previously played with St. Vincent in 2014 during Nirvana’s Rock and Roll Hall of Hame induction ceremony. They first performed “The Man Who Sold the World” with Beck at Clive Davis’ pre-Grammy party in 2016.

The Heaven gala — which also included sets from Cheap Trick, L7 and Marilyn Manson — marked the Nirvana trio’s first reunion since Foo Fighters‘ 2018 Cal Jam festival. But as Yahoo reports, it could be their last one for awhile; Novoselic said they don’t plan to perform together for “another four or five years” but “couldn’t resist the temptation” of playing for this charity event.

Grohl has teamed with Violet onstage in the past. They’ve played duo versions of Adele and Billie Eilish songs, and the younger Grohl joined Foo Fighters live to harmonize on their signature track “My Hero” at the Leeds Festival in 2019.