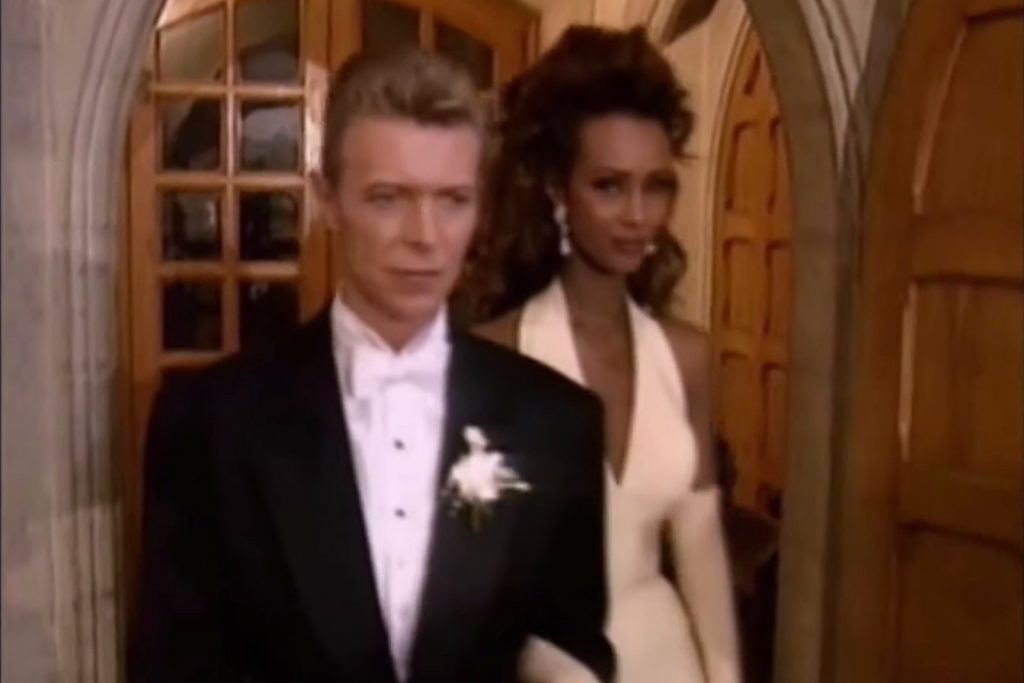 When David Bowie and Iman married on April 24, 1992, it wasn’t a big, elaborate affair. Instead, the rock star and the supermodel tied the knot in Lausanne, Switzerland, in a civil ceremony attended by just two witnesses and an interpreter.

Bowie had kept a home in the town since the ‘70s, and the ceremony took place at the Hôtel de Ville, or City Hall. The bride wore white in pantsuit form, while the groom echoed that energy in a black pantsuit of his own.

The wedding was actually so tiny that the press didn’t catch wind of it for over a week, and news of the nuptials didn’t hit the papers until 10 days after the ceremony. A couple of months later, the pair would throw a larger event in Tuscany, where Bowie would wear tails and Iman strode down the aisle in a halter-top Herve Leger gown while the Bulgarian folk song “Kalimankou Denkou” played. Bono, Brian Eno and Yoko Ono were among the 68 people in attendance, and Bowie composed some of the music for the reception, which was held at a 16th century Medici mansion, himself. (Three of the tracks — ”The Wedding,” “The Wedding Song,” and “Pallas Athena” — would later become part of Bowie’s 1993 album, Black Tie, White Noise.)

At the time of their wedding, Iman and Bowie had been together a little over two years, having first been introduced by Bowie’s longtime friend and hairdresser, Teddy Antolin. The pal knew Bowie found the Somali supermodel attractive, so he invited her to a dinner party. She threw on a black leather ensemble and went, thinking it would be a large affair, but found only Antolin and his boyfriend, along with Bowie. The de facto double date went swimmingly, with Antolin later telling WC2H in London that, when Iman and Bowie looked at each other, “it was love at first sight.”

Bowie agreed, telling Hello! in 2000 that his attraction to Iman “was immediate and all-encompassing.” “I couldn’t sleep after the excitement of our first date,” he confessed. “That she would be my wife, in my head, was a done deal. I’d never gone after anything… with such passion in all my life.”

Iman didn’t quite feel the same, telling Express in 2011 that she didn’t want to get involved with a rock star, calling it “not a sane thing to do.” She’d also been married twice before: Once to a Somali businessman when she was just 18 and once to NBA star Spencer Haywood, with whom she had a daughter, Zulekha. Still, she admitted, Bowie—who she said was always just David Jones to her—changed her mind.

According to Iman, Bowie was a consummate romantic. In 2021, she told InStyle that the singer would always give her flowers to commemorate the day they’d met, and that he would always walk on the part of the sidewalk closest to the street. “One of the reasons why I first fell in love with him,” she revealed, “was because when we were walking, my shoelace became untied, and he got down on his knees and tied my shoes. It can’t get more romantic than that.”

Iman told The Cut that she knew Bowie was the one after just two weeks of dating. She had traveled to Paris, and when she arrived at her hotel, found her room filled with her favorite flower, gardenias, courtesy of Bowie. When she returned to Los Angeles, Bowie was there waiting for her. “The doors open to the plane and I come out and I see all these people taking a picture of somebody,” Iman recalled. “He was standing there, flowers in hand, no security. That was when I knew. He didn’t care if anyone saw.”

Together for more than 25 years before Bowie’s death in 2016, the pair lived an immensely private life, often eschewing parties in lieu of soccer games and school pick-ups for their daughter, Lexi. Iman told InStyle that, because the pair had both been in previous marriages, they “understood from the start that there is a difference between the public life and the private life; those two had to be separated completely.” She continued: “Because we came together later in our lives, family came first. The careers had been done and all of that… We also just had love and respect for each other—that was it.”

In 2021, Iman admitted she still felt married to Bowie despite his passing. “Someone a few years ago referred to David as my late husband,” she recalled, “and I said ‘No, he’s not my late husband. He’s my husband.’” Iman further revealed that she felt Bowie’s presence at their home in upstate New York, where she would often watch the sunset with the late rocker. “In that way, he is ever present,” Iman told People, “Through my memory, [our] love lives.”