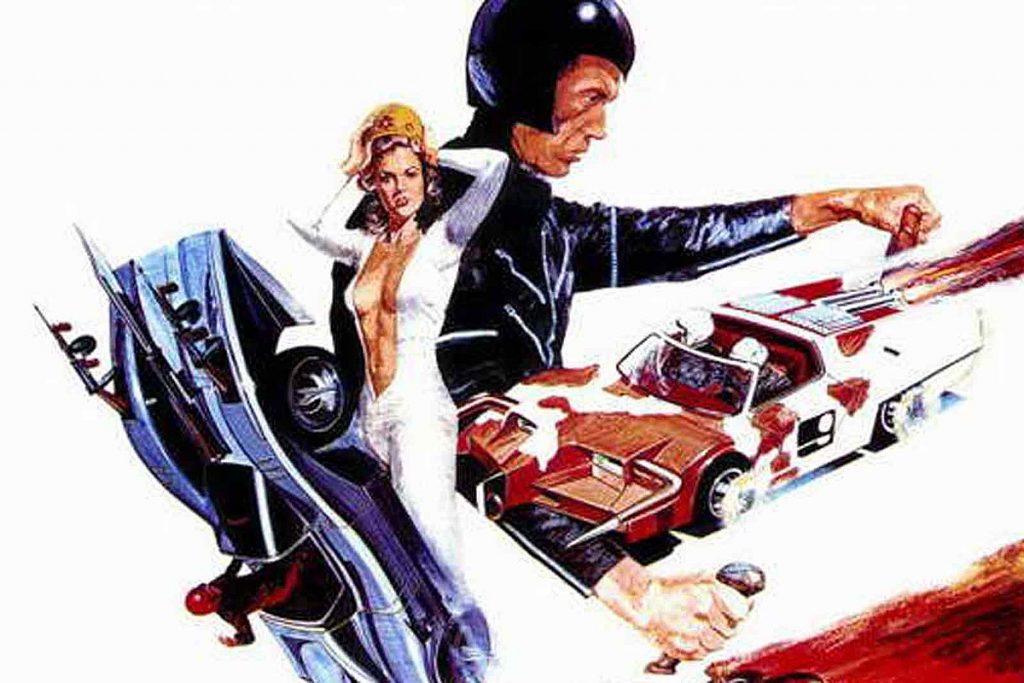 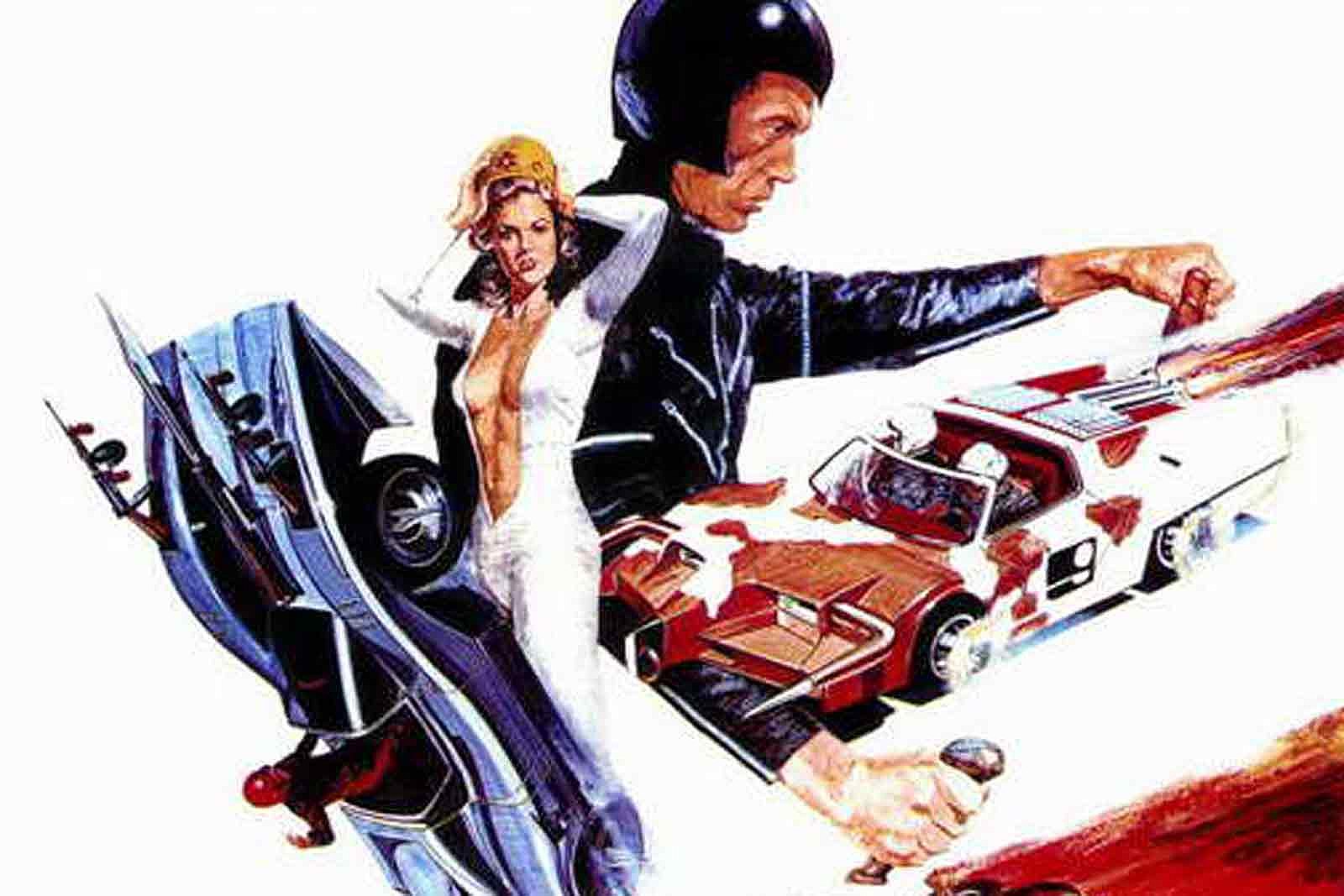 Like so many other ’70s dystopia sci-fi movies, Death Race 2000 was eerily predictive of the future.

The idea for the film, which premiered on April 27, 1975, was hatched by producer Roger Corman, who had a  hand in advancing more Hollywood careers than it’s possible to count. He purportedly got the concept for Death Race when he caught wind of Norman Jewison’s Rollerball, a futuristic romp about a violent roller-derby sport starring James Caan, which was to open in July 1975. Corman’s idea – typical for him – was to make a similar movie and release it during the advertising blitz for Rollerball, essentially making his money off someone’s else’s press.

This gambit worked like a charm. Death Race 2000 earned $5 million on a budget in the vicinity of $400,000 and, also typical of Corman’s work, immediately became a cult classic.

The plot stemmed from a short story by prolific novelist and screenwriter Ib Melchior that was turned into a screenplay by Robert Thom and Charles Griffith. It involves a five-car coast-to-coast race across America in the year 2000. The setup isn’t that unusual – 1976’s Gumball Rally and Cannonball Run from 1981, among others, ended up covering the same ground – but in Death Race 2000, the race is the most popular sporting event in the world and the contestants get points for killing people with their cars.

A man called Frankenstein (played by David Carradine) is the reigning champion and the greatest driver in the world. He got his name because he’s survived so many horrific accidents over the years that most of his body parts have been replaced. He wears a full-face black leather mask to hide his horrible disfigurement and drives a car whose front bumper is bedazzled with large white fangs.

Arrayed against him and his new navigator, Annie Smith (Simone Griffeth), are four other cars – piloted by a Nazi named Matilda the Hun (Roberta Collins), a Roman-style gladiator called Nero the Hero (Martin Kove, who would go on to play the sensei of the Cobra Kais in the Karate Kid series), a cowgirl named Calamity Jane (Mary Woronov, who got her start working with Andy Warhol) and a Chicago knock-off mobster named “Machine Gun” Joe Viterbo (Sylvester Stallone in his last film before Rocky launched him to superstardom.)

There’s also, in classic sci-fi dystopia fashion, a resistance movement determined to not only stop the race, but overthrow the fascistic government – led by “Mr. President,” who rules from his summer palace in Peking – that has disfigured America. The race proceeds across the continent at 200 miles per hour, smashing and dashing civilians along the way, while the resistance movement strives to spoil the fun.

One by one the other drivers perish until only Frankenstein and Machine Gun Joe are left. The plot of the resistance is uncovered – it turns out that Frankenstein’s new driver is a part of it – and the government wages a misinformation campaign blaming its political attacks on the French. In the end, Mr. President gets his due, though not quite in the way the resistance planned he would, and Frankenstein turns out to be an okay guy after all.

Director Paul Bartel has great fun with all of this, and, as in so many of Corman’s productions, the campy, the lurid and the violent coexist in equal measure. Heads get squashed under car wheels, breasts are bared, it turns out that Frankenstein has a fake hand that includes a grenade implant and there’s lots of accelerated footage of garishly decorated cars skidding around corners and trying to run each other off the road.

Also in classic Corman fashion, unexpected names pop up throughout the cast and crew. In addition to Carradine and Stallone, the movie features Don Steele, one of the most popular radio DJs at the time, as the manic MC of the Death Race, Junior Bruce. It was edited by Tina Hirsch, who would go on to edit everything from Walter Hill’s existentialist road movie The Driver to Joe Dante’s Gremlins and numerous episodes of The West Wing. The cinematographer was Tak Fujimoto, whose legendary career includes Terrence Malick’s Badlands, John Hughes’s Ferris Bueller’s Day Off, Jonathan Demme’s The Silence of the Lambs and many more.

But maybe the most enjoyable part of Death Race 2000 is the way it presages so much that came after it. With its entertainment-mad audience and zany announcer (Steele really sinks his teeth into the part), it sets the stage for movies like The Running Man and The Hunger Games trilogy. The built-in critique of televised violence – featuring a voice-over that runs along with the closing credits offering a tongue-in-cheek encapsulation of the history of violence that we’ve supposedly outgrown – has been echoed in movies from virtually succeeding every decade, from Robocop to Idiocracy. And its class politics, featuring an elite group that has usurped power from the impoverished masses, has become a staple of science fiction films for more than four decades.

Death Race 2000 was remade in 2008 by Paul W.S. Anderson as Death Race (and which spawned several sequels), but that movie and most other imitators of the original can’t recapture the charm of the original. You can thank Corman for that. Often imitated but never equaled, the producer and director has churned out film after film in his career that can be derivative but original, over-the-top but cleverly self-aware, and they nearly always match the level of their flaws with the level of their entertainment value. Death Race 2000 is a prime example of this.